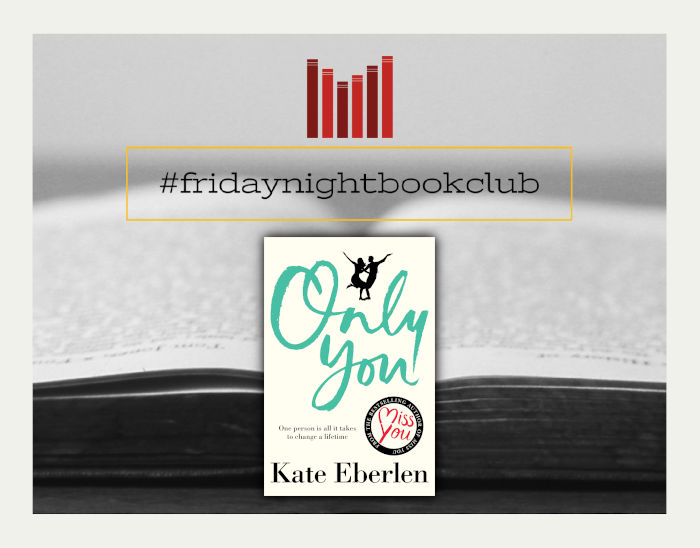 Get comfortable this evening with a glass of wine and an excerpt from Kate Eberlen’s impossibly romantic new novel, Only You.

Eberlen’s first book, Miss You, was a huge hit and Only You is just as compelling.

One person is all it takes to change a lifetime … But how will you know if they’re the one?

Present
Letty and Alf are the only English speakers at an Italian class in Rome, where they discover the language that really connects them is dance: Letty’s first love was ballet, while Alf was a junior ballroom champion. They come from different worlds, until the moment they waltz around the Piazza Navona, and everything changes.

Past
But one moment can’t change the past, and it’s clear that Alf and Letty still have their secrets. What caused them to leave their lives behind in England? And who, or what, are they running from? As their relationship deepens, it becomes harder and harder to tell the truth …

Future
When the unthinkable happens, Letty returns to London and Alf to Blackpool. Will they spend their lives apart, or discover a future together?

‘Only You is the book we all need right now. Charming, tender, funny – and sweet without being sickly, like the very best gelato – it’s utterly glorious escapism. You will gulp it down more quickly than an Aperol Spritz on a hot summer’s night. Perfetto!’ – Veronica Henry

The air is bright with sunshine, crisp with a lingering breath of dawn. As Alf steps out of the apartment building, his face tilting towards the clear blue sky, a sigh of contentment spreads through his body, releasing tension he didn’t even know was there. This has become his favourite moment of the day. He has lived in Rome for six months, but the way the morning light gives a kind of beauty to the shabbiest of buildings still lifts him. It’s a walk to the school, strolling past sites that in an hour’s time will be thronging with tourists. It feels like a privilege, like being alone with a free pass in a theme park or something. First, there’s the long slow climb through the posh residential area until the avenue meets a scrubby expanse of field that is the Circus Maximus, then a tree-lined road slopes up between the Palatine and the Caelian, two of the seven hills. Suddenly you’re in front of the Colosseum. It never stops amazing him how it’s just standing there, the colours as crude as the postcards they sell on the souvenir vans that are just opening for the day. He takes a photo and posts it on Instagram with the greeting: Buon giorno! #Roma #Rome #colosseo #bella #beautiful.

Alf scrolls through his feed, pausing as he sees a photo of his grandparents with big smiles on their faces. Cheryl, his gran, is wearing one of her old competition dresses that always reminds Alf of a cupcake, because the skirt has so much netting it stands up by itself without Cheryl being inside it. This one is a deep pink colour, with silver diamanté swirls on the bodice. His grandad Chris is in full white tie and tails. The caption underneath is: Keep dancing! #slowfoxtrot #nevertoooldtodance. Alf’s never been on a cruise ship, but he knows that you stay in cabins. There are thousands of them, all stacked up like a block of flats. He can’t imagine how there’s the cupboard space for their dancewear. He pities the other old people who’ve gone on a cruise holiday fancying a gentle turn around the dance floor, and have the bad luck of finding themselves on the same ship as Cheryl and the dress that’ll swish you out of the way if your floor-craft isn’t up to much. And Cheryl unable to resist teaching as she swirls past.

‘Let the man lead!’ ‘Sharper with your head!’ ‘Flower in a vase! You’re wilting!’

Alf ‘likes’ the photo, not knowing whether his gran will be pleased or annoyed when she sees. He wonders if she ever looks at his posts. She never ‘likes’ them. She probably thinks that doing so would show approval.

Alf wonders what the weather’s like in Blackpool. The default image that comes to mind when he thinks about home is a rain-lashed promenade, the water pewter, the clouds so grey it’s difficult to tell where sky meets sea. But that’s only because it was that kind of day when he left. When the sun shines, Blackpool can be as attractive as almost anywhere.

But not Rome. What he loves about Rome is the surprises. You’ll be walking along a street – pretty enough, but nothing special – then suddenly there’ll be a church with a tower and a tiled roof, so old it looks like a film set, or an even older bit of wall, with thousands of narrow red bricks made before there was technology, that’s stood there for two thousand years.

As he winds his way up through the cobbled streets of Monti to get away from the traffic on the main road, he’s tempted by the aroma of espresso wafting from every bar he passes, but he has to be on time. They give you a test before the classes start to see which one you’re in. You don’t have to write anything, just tick the correct box, the nice receptionist told him when she saw his face at the mention of exams.

Behind him, the hoot of a car’s horn warns him to get off the road, and one of the old Fiat Cinquecentos passes, its engine as spluttery as a moped as it pulls up the hill. The driver has the radio tuned to a bright morning station playing Pharrell Williams’s ‘Happy’ to get the day off to a good start. Jive, Alf thinks, his feet automatically kicking and flicking to the beat, until the car makes a right and the music fades and he’s not even sure whether he can hear it any more.

Alf has no idea about the multiple-choice grammar test, so he just ticks what sounds best to him. Then he’s told to see the director of the school to assess how good his speaking is. The door to the office is closed. Inside, he can hear a man asking questions in slow Italian and a woman giving quiet, hesitant responses. Then there’s the sound of a chair being scraped back and, sooner than Alf expects, the door opens, and the girl who comes out gives him a look that makes him feel as if he’s been caught eavesdropping.

It doesn’t help his heart rate that she is stunningly beautiful and walks towards the staircase with her feet turned out, like a dancer.

‘Buon giorno!’ The director waves him into his office.

Alf thinks it’s all about the gestures with Italian. He’s watched how Italians talk to each other. Even when they’re alone and on a mobile phone, the free hand is moving to emphasize a point, express surprise or despair. Sally and Mike, who share the apartment, have been here much longer than him, and speak much better Italian, but Alf is always the one who gets the compliments, because he puts his body into it. The director of the school isn’t as impressed. He likes Alf’s fluency, he tells him, but his grammar is non-existent. He hands him a piece of paper with the number of a classroom at the very top of the building.

There are seven others in the class. Six of them are trying to chat using the fragments of Italian they already know, but the girl he saw downstairs is sitting alone, concentrating on an Italian–English dictionary. She is wearing a long-sleeved grey T-shirt that could have cost two pounds or two hundred, because she’s got the sort of body that makes cheap classy, and jeans with horizontal distressing – not tight like the girls back home, their pale flesh bulging through the gaps in the denim, but loose, held up only by her pelvic bones, the slashes giving glimpses of slim bare leg beneath.

The only chair that is empty is next to hers. When he sits down, she shifts slightly away.

The teacher, whose name is Susanna, is holding four lengths of narrow gold ribbon, the type that pasticcerie use to wrap the trays of tiny cakes Italians take along to Sunday lunch with their families. She bunches them in her hand, indicating for all the students to come up and grab an end, and then she lets go, leaving them each connected to another person.

‘Introduzioni!’ she says, pointing to useful Italian greetings she has written on the whiteboard.

The pairs stand smiling nervously, still obediently holding their ends of ribbon, until Alf decides to break the silence.

‘Ciao!’ he says to the beautiful young woman he has lucked out with. ‘Come ti chiami?’

As if given permission, the others peel away from the huddle, echoing his greeting and, amid little coughs of half-embarrassed laughter, the classroom stutters to life.

‘Short for Violet,’ she says.

‘Come ti chiami?’ she asks him.

She asks where he is from.

‘Two English people! Not a good idea!’ says the teacher.

She tells them to change partners.