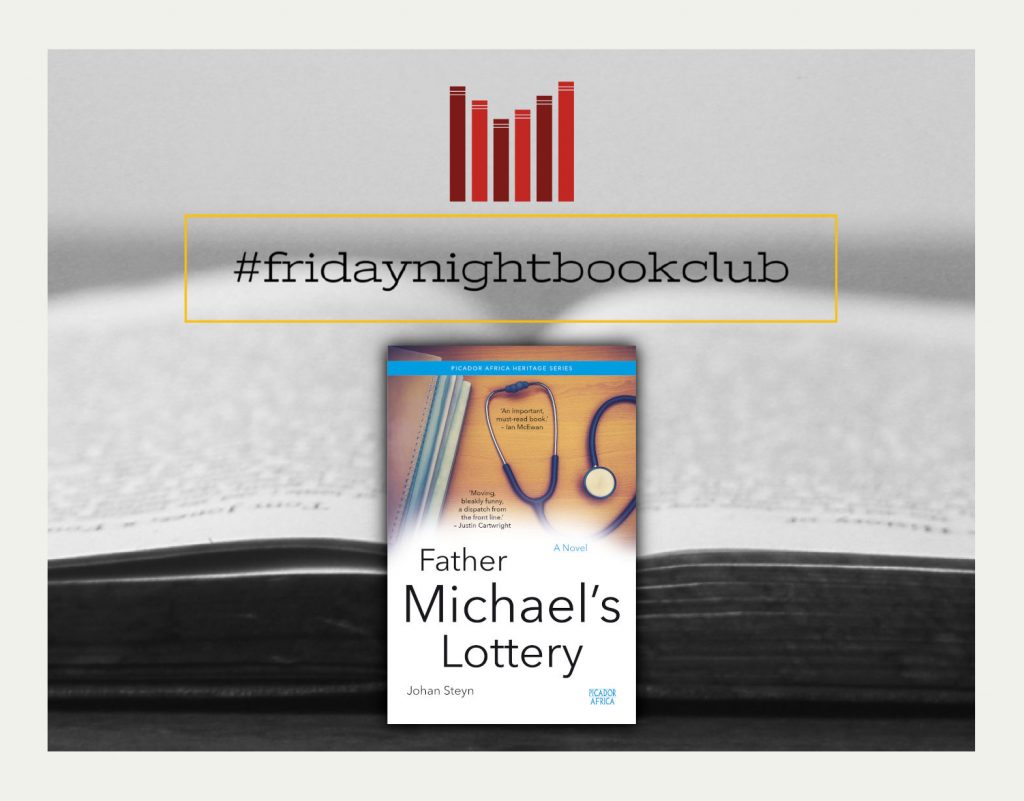 Staying in this evening? Get comfortable with a glass of wine and this exclusive extract from Father Michael’s Lottery by Johan Steyn.

First published in 2005, the novel was recently rereleased as part of the Picador Africa Heritage Classics collection – books that deserve to find a new audience and be read again.

‘Father Michael’s Lottery is a great-spirited novel that tells its tale – about a committed doctor’s search for more “happy endings” in all-too-unpromising circumstances – with heart and passion and hope. The telling is fired by Johan Steyn’s fervour for justice for poor patients in Africa, but also by his sense of humour and his love of the people, the birds, the animals and the vistas of our continent.’ – Judge Edwin Cameron

The doctors and nurses at a small hospital in an African town are fighting an uphill battle against the Aids pandemic, made worse by the interventions of Holmes, the budget-conscious superintendent, and his bungling sidekick, Thunderbird. The rebellious and profane Morgan thwarts every new rule in his quest to save his patients, most of whom are dying because they lack the resources to buy back their lives with over-priced drugs.

His efforts are valiantly supported by the enigmatic Oumar, the likeable Kenyan, the beautiful Violet, and Rebecca, the battleaxe with a heart of gold. Then there is Mary, with her passion for birds, holding Morgan’s heart in her frail hands; Naledi, the success story, who is brought back from the brink of death; and Rastodika, the untameable spirit.

When funds are needed for a kidney transplant, Morgan conspires with Father Michael; Dorcas, the shebeen queen; and Rachel, the whore, to make the rich Mr B organise a Beerfest to pay for the operation. But then things don’t work out exactly as they had planned.

Morgan clearly remembered the day Mary was brought in. As always, the pick-up truck was spotted even before it started to reverse towards the entrance. The doors with the frosted glass panes were opened, orders were shouted and Rebecca went outside to inspect the cargo before the makeshift ambulance came to a halt. Casualty was chaotic as usual, but Morgan paused and watched.

On the back, wedged between two spare wheels, a drum of fuel and a toolbox was a bright, multicoloured blanket. The head of a girl rested on two white, dust-covered pillows. The truck reversed carefully until it was in the shade just outside the entrance. Rebecca waited, together with two nurses and a trolley. When the pick-up came to a halt, she commandeered two fit-looking bystanders to lift the girl off the back. She had obviously underestimated their enthusiasm and before she could stop them, both men had jumped over the tailgate. One of them scooped the girl into his arms and stood up, holding her like a baby, with her head resting against his chest.

Rebecca straightened her back. She put her hands on her hips.

Due to the noise in the room Morgan couldn’t hear what she was saying. Both men froze. The man holding the girl stood like a statue and his comrade carefully climbed down again. Then, with an air of exaggerated gentleness, they passed the girl from one to the other. The blanket slipped away. As it fell to the ground, Morgan saw the thin figure of the girl.

Rebecca moved forward and supported the head. They lowered the girl onto the trolley and Morgan saw a thin arm reaching out as if to assist in the proceedings. One of the men picked up the blanket and vigorously shook off the dust. It was a patched quilt of red, green, orange and blue. The girl lay f lat on the trolley and underneath her flimsy dress her pelvic bones stuck out like wings.

The driver of the truck walked up to Rebecca. He was carrying a brown envelope that he handed to her with both hands. She took it, pointed at the truck and shouted a command. One of the pillows was removed, dusted and placed under the girl’s head.

Finally, she was covered with the blanket and the procession came into Casualty.

‘Everyone is coming here today,’ Rebecca said as they came past.

She handed Morgan the discharge summary from yet another overcrowded hospital and took the girl to the resuscitation room.

He removed the file from the envelope, paged through the notes and read about yet another tragedy. The language was cold and impersonal, as always. A young teacher who had had an exploration for an abdominal mass. Diagnosis: Lymphoma. HIV positive, written in red ink. Patient refused chemotherapy. Discharged on relatives’ request.

The girl had travelled 200 kilometres.

Why the hell bring her here? thought Morgan. No one was going to salvage this girl.

‘Just help her.’ He heard a man’s voice above the noise in the room. Morgan looked up and recognised the driver of the truck; a big man with thick forearms, square, calloused hands, and a broad, weather-beaten face.

You fool, thought Morgan. You bring the girl here, on the back of a truck, in this heat. For what? Do you expect a miracle?

The man seemed oblivious to the noise around him. His calm demeanour reminded Morgan of a rock standing firm amongst swirling waves.

The eyes were innocent, like those of a child.

‘Are you the father?’ he asked, trying to keep his voice neutral.

Morgan sighed and shook his head. ‘There’s not a lot we can do for her,’ he said. ‘You must realise that.’

‘Just do your best.’ The man moved forward and grabbed his hand. ‘I trust you.’

‘You know what’s wrong with her?’ Morgan asked, holding up the file like irrefutable evidence.

The man nodded. ‘I have been told,’ he replied.

The man grabbed Morgan’s right hand in both of his and said, ‘I know you will try.’

in the resuscitation room Rebecca was putting up a drip by the light of an angle-poise lamp.

Morgan moved to the bedside. The girl shifted her gaze towards him and he noticed her calm, undefeated eyes.

She was dehydrated, underfed and exhausted after the journey.

‘There you are my girl,’ Rebecca secured the drip and gently patted the thin arm. She was speaking in a soft voice, not her usual harsh-edged Casualty Matron’s voice. Morgan looked at the girl’s beautiful face and understood Rebecca’s sudden tenderness. He smiled and took a history in spite of knowing the story already.

All her words were carefully chosen and spoken in a melodious voice. Without a hint of self-pity, Mary related a tale of woe that had left her body in ruins but had not dented her spirit. ‘And that is all,’ she concluded simply.

Morgan admitted her into his ward and from that day onwards Violet and her girls nursed her with endless patience.

‘Mary must have some pain,’ Violet told him more than once, ‘but she never complains.’

One day he found her sitting in a wheelchair on the veranda, looking out over the garden that was filled with the cries of weavers darting to and from amongst the trees.

Mary was adamant about chemotherapy. ‘It just makes me sick,’ she told Morgan, ‘and I have to enjoy as much as I can.’ She smiled faintly, taking stock of her body with the impartial air of a judge and said, ‘What use can it be anyway?’

Morgan understood perfectly. Life is there to be lived, not to be prolonged at all costs.

‘I know I am going to die,’ Mary said, ‘but I want to enjoy the good days I still have left.’ This was the end of the road for her. Her mother was too ill to look after her, her daughter too young and, apart from her uncle, she had no other relatives to turn to.

She observed the world with the fresh vision of a child, accepting life as a gift in spite of her bedridden state. Morgan tried to forget that theirs was just a very temporary liaison.