Friday Night Book Club: Read an excerpt from Eli’s Promise – a rich, rewarding novel by Ronald H Balson, the author of Once We Were Brothers
More about the book! 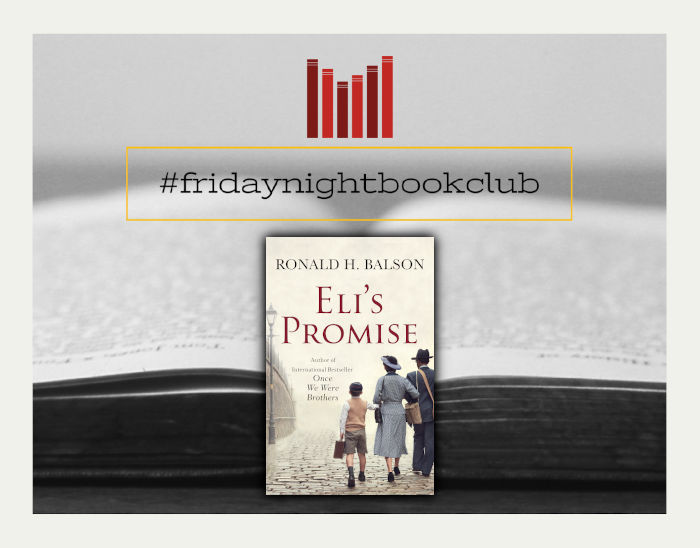 Get comfortable this evening with a glass of wine and an excerpt from Eli’s Promise, the story of a ‘fixer’ in a Polish town during World War II, his betrayal of a Jewish family, and a search for justice 25 years later – by Ronald H Balson, the winner of the National Jewish Book Award!

Eli’s Promise is a masterful work of historical fiction spanning three eras – Nazi-occupied Poland, the American Zone of post-war Germany, and Chicago at the height of the Vietnam War.

Award-winning author Ronald H Balson explores the human cost of war, the mixed blessings of survival, and the enduring strength of family bonds.

1939: Eli Rosen lives with his wife Esther and their young son in the Polish town of Lublin, where his family owns a construction company. As a consequence of the Nazi occupation, Eli’s company is Aryanized, appropriated and transferred to Maximilian Poleski—an unprincipled profiteer who peddles favors to Lublin’s subjugated residents. An uneasy alliance is formed; Poleski will keep the Rosen family safe if Eli will manage the business. Will Poleski honor his promise or will their relationship end in betrayal and tragedy?

1946: Eli resides with his son in a displaced persons camp in Allied-occupied Germany hoping for a visa to America. His wife has been missing since the war. One man is sneaking around the camps selling illegal visas; might he know what has happened to her?

1965: Eli rents a room in Albany Park, Chicago. He is on a mission. With patience, cunning, and relentless focus, he navigates unfamiliar streets and dangerous political backrooms, searching for the truth.

Powerful and emotional, Ronald H Balson’s Eli’s Promise is a rich, rewarding novel of World War II and a husband’s quest for justice.

In the waning weeks of the Second World War, as the German defenses retreated into ever-shrinking circles around Berlin, the Nazi concentration camps sitting in the outer reaches, once heavily fortified, lay pregnable in the path of the Allies’ advance. The German high command knew that liberation of those camps was imminent, but they steadfastly refused to release their grip on the Jewish prisoners. They intended to finish implementing their Final Solution of the Jewish Question. In pursuance thereof, Reichsführer Heinrich Himmler ordered the SS to transfer the Jews from the outlying camps to locations inside Germany.

Just before abandoning each of those camps, the SS guards corralled as many prisoners as they could and marched them deep into Germany in what came to be known as the Nazi death marches. Already weakened by disease and malnutrition, tens of thousands of men, women and children were forced to walk long distances in the throes of winter to other camps within Germany’s interior. Buchenwald was the largest of those camps.

On the eighth day of April 1945, at approximately the noon hour, a frantic message went out from the underground resistance in the camp. It was sent by Morse code and repeated several times in English, German and Russian.

‘To the Allies. To the army of General Patton. This is the Buchenwald concentration camp. SOS. We request help. They want to evacuate us. The SS wants to destroy us.’

The response came quickly. ‘KZ Bu. Hold out. Rushing to your aid. Staff of Third Army.’

The Sixth Armored Division, proudly known as the Super Sixth, was the first division of Patton’s Third to reach Buchenwald. The soldiers entered the vast complex through the main gate and were shocked to find inmates but no guards. They quickly discovered that a contingent of SS had marched some prisoners north. Other guards had fled and were scattering through the woods like rats from a foundering ship. In their wake, thousands of inmates had been abandoned and left alone to fend for themselves with no food and very little water. Some had found clothing. Some had not. Some were too weak to do much more than lean against a wall, sit on the ground or lie on the wooden slabs that served as beds. Some were merely apparitions. Ghosts and skeletons.

The bewildered GIs, their helmet straps hanging loosely, their field jackets partially unzipped, their trousers bloused above their leather boots, had come upon a vision of human deprivation that would haunt each of them for the rest of their lives. These were not weak men. They were battle-hardened soldiers. They had landed on the Normandy beaches, secured a bridgehead across the Seine, cut across France for seven hundred miles and reached the German border on December 6. They were a tough, confident bunch. But they were not prepared for what they saw.

Corporal Reilly swallowed hard and softly uttered, ‘Jesus, Captain, these fellows …’ He stopped. He couldn’t find the words to finish.

The soldiers of the Fourth Platoon had entered a long wooden building, formerly designed for eighty horses but later configured to hold 1,200 prisoners on five levels of wooden shelves they called bunks. No heat, no water, no toilets. Inmates, too weak to rise, lay on their wooden slabs watching the GIs. They strained to lift their heads. They smiled and nodded. Many expressed their gratitude in languages the GIs didn’t understand.

The men of the Fourth Platoon were seasoned soldiers. They fought and defeated the German offensive at the Battle of the Bulge. They were Patton’s boys. They won the decisive battles in the European theater. Just ask them, they’d tell you. But standing in the rancid air of the Buchenwald barracks, amidst the dead and dying, a soldier’s knees could weaken. Many couldn’t hold their lunch.

‘All right, men,’ the captain barked, ‘let’s get these people out of here. Williams: the ones that can walk, lead them to the train. The ones that can’t, the rest of you get them onto the stretchers and out to the hospital trucks. Pronto!’ To his adjutant, he said quietly, ‘Take the strongest ones first. Some of these poor fellows are more dead than alive. They won’t make it.’

One man, little more than bones held in place by a thin wrapping of skin, lay with two others on a third-level bunk. He reached out and grabbed a fistful of Reilly’s jacket. ‘Whoa, fella,’ Reilly said. ‘Take it easy. We’re going to help you, I promise. We’re gonna get you out of here.’

Mustering all of his strength, the inmate shouted, ‘Nein, nein,’ followed by a long string of incomprehensible phrases. Tears ran from the man’s sunken eyes, and his body shook in desperation. ‘Captain,’ Reilly said, ‘this fella’s trying to tell me something pretty important, but I don’t know what the hell he’s saying. I think he’s talkin’ Kraut.’

The captain motioned to a tall soldier at the other end of the building. ‘Steiner, what’s this man saying?’

Corporal Steiner walked over and listened to the inmate’s pleas. He nodded. ‘I don’t think he’s speaking German, Captain. It could be Yiddish. They’re similar. I think he’s saying his name is Eli. He’s saying we have to find Izaak. That’s his son. He says Izaak is in the children’s building. He says there’s a thousand children in that building.’

‘A thousand children? Holy shit, where are these children? Which one of these buildings?’

The captain stood in the doorway and looked out over the huge complex. ‘Hell if I know which one’s Block Eight. Can he show us?’

The captain nodded his head and started to walk away when Eli spoke again. Steiner translated. ‘He says he can take us there, Captain. He just needs a little help.’

The captain sighed. ‘I don’t know how much help we can give him. He’s barely alive.’

Reilly looked at Eli, at the desperation on his face, and said, ‘Captain, I can lift him. He’s okay. He needs to find his son. I’ll take him. I’ll carry him if I have to. He can lead us to Izaak and the rest of the children.’

Eli grasped the meaning and smiled. Reilly lifted him down off the bunk, conscious that the man weighed less than a field pack. He helped him to his feet. With his arm around Eli’s back and under his shoulder, he started to slowly lead him out but stopped abruptly. ‘Jesus, he’s got no shoes on. He’s got rags wrapped around his feet. Anybody see any shoes?’

Eli looked at his feet and waved it off. ‘Nein, nein, nein.’ He pointed sharply to the door. ‘Izaak,’ he said. ‘Der kinder.’ The captain nodded. ‘All right, Reilly, take him out. Find those kids.’ The corporal unzipped his coat, placed it over Eli’s shoulders and walked him out the door.

Other soldiers of the Super Sixth were converging at Block 8 and were starting to attend to the children. All sizes, all ages. Some as young as six. Some of the children were being gathered into groups for transport out. Eli’s eyes scanned the hundreds of children. His fear was palpable. What were the chances he’d find his son? There were so many. Suddenly, his whole body stiffened. ‘Izaak, Izaak!’ he screamed, and stumbled forward. A boy, no more than ten or eleven, came running. ‘Papa! Papa!’ Eli dropped to his knees as the boy ran into his arms. Reilly watched the two hug each other, and the hardened soldier broke into tears.

‘Come on, Eli, Izaak,’ Reilly said, bending down. ‘We gotta get you out of this cold, muddy prison camp and let some doctors fix you up.’

Reilly waved for a stretcher, and two corpsmen were quick to respond. One of them patted Izaak on the head and said, ‘You go with the other kids, little guy. We’ll take care of your pops.’ But Izaak wouldn’t leave his father.

Reilly placed his hand on the corpsman’s shoulder. ‘Martin, how many of these kids still have a parent? This boy needs to stay with his father. Let’s make an exception this time.’

Martin pulled Reilly aside and whispered, ‘His father’s in bad shape. He’s probably not going to make it. A lot of them aren’t.’

‘All the more reason to let his son stay with him,’ Reilly answered.

The corpsman shrugged and placed Eli on the stretcher. Eli looked up at Reilly and in little more than a hoarse whisper, through cracked lips, he said, ‘A dank, a sheynem dank.’ The two corpsmen carried Eli with little Izaak in tow toward a line of white canvas-covered trucks bearing Swiss license plates with Red Cross stenciled on the transom. Reilly smiled and rejoined his squad.