Friday Night Book Club: Read an excerpt from Charlotte Levin’s powerful and darkly funny novel If I Can’t Have You
More about the book! 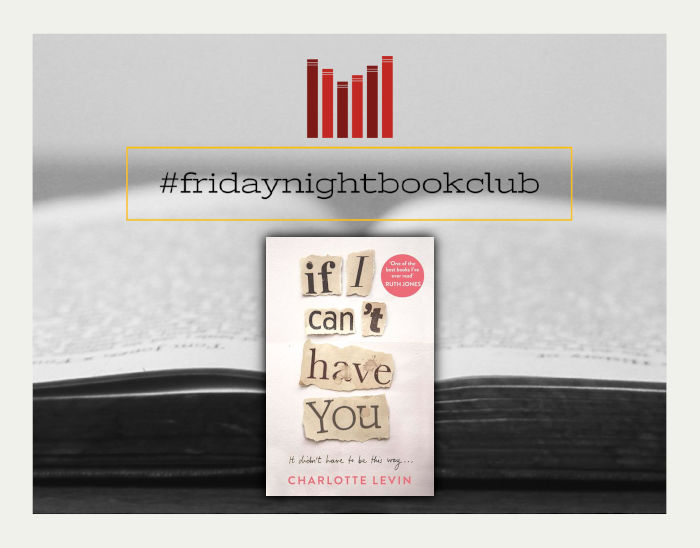 Get comfortable this evening with a glass of wine (at last!) and an excerpt from If I Can’t Have You by Charlotte Levin, an all-consuming novel about loneliness, obsession and how far we go for the ones we love.

‘So beautifully written, such a devastatingly compelling story. I can honestly say it’s one of the best books I’ve ever read – it is without shadow of a doubt, EASILY up there with The Girl on the Train and Eleanor Oliphant.’ – Ruth Jones

What if the problem with your love life is you?

Samuel, the day we met I knew I’d finally found what I’ve been waiting for.

Then you left me.

And now I am alone.

Everyone I love leaves in the end.

But not this time.

I’m not giving up on us.

I’m not giving up on you.

When you love someone, you never let them go.

That’s why for me, this is just beginning.

The group of girls cooing over the fruits of their Christmas shopping trip stopped and slapped each other’s arms. The marrieds ceased to argue and held hands. The reading man lost his page.

I stood in the carriage amongst them.

A young suity-booty City Prick and a Sloane Ranger with a leg-kicking infant on her lap parted ways to expose a seat for me. I don’t believe out of politeness. Most likely out of fear, confusion. The fact my lightheaded sways made it probable I would fall their way.

Regardless of the reason, I was grateful, and squeezed my white taffeta-engulfed body between them, whilst attempting to keep the material under control, which proved impossible as the voluminous skirt overlapped onto them both.

The child, who I could now see was a girl, stroked my dress with her saliva-ridden fingers. ‘Look at the princess, Mummy.’ The mother buried her spawn’s head into her blazer, clearly wishing to God she’d just got a black cab as usual. However, her utter Englishness forced her to smile at me. I returned a semi-version, but was conscious of my front tooth, hanging by a minute thread of gum. It hurt. I closed my mouth and looked down at the blood covering my chest. It was odd how it had taken more to the embroidery than the taffeta.

Raising my head, I could see in the distorted window’s reflection, Sloanie and City Prick looking at each other behind me in wide-eyed horror. Though they appeared to be strangers, I’d bonded them. Beyond their ghostly images was the huge High Street Kensington sign. It was telling me goodbye. I remember thinking I’d write a book about it one day. ‘The Fucked Girl on the Train‘.

As we pulled away from the station, eyes screwed, faces twisted with calculations as they tried to decipher what had happened. Was I the jilter or the jiltee? But, as you know more than anyone, Dr Franco, people are rarely what they appear to be on the surface. The marrieds may have in fact been illicit lovers, the shopping girls been out on the steal.

Sloanie pressed her Chanel silk scarf against her nose. It was my vomit-laced veil she could smell. I was tempted to turn and tell her everything. Ask for her help. But I couldn’t because I didn’t know her. I didn’t know anyone anymore.

She wouldn’t have given a shit anyway. Her only concern being I didn’t scare Mini Sloane. I smiled at the kid. It cried.

I was already old news. People stopped gawking or were doing so more subtly at least. They returned to their arguing, laughing, avoiding. Heads magnetically drawn down to phones. But then came the flashes. There was no doubt I’d feature heavily in conversations that day. Photo evidence was needed. I’d be trending on Twitter.

Reading man glanced up from his book – The Seven Habits of Highly Effective People. Perhaps he was wondering which my habit was. But then that’s what I love about London. Rather than staring why didn’t they ask if I was okay? I was not fucking okay, people. In Manchester, I’d have been in someone’s house by then, being handed a cup of tea with six sugars and a Blue Riband.

The tube slowed again. We were at Earls Court now. I could see them on the platform waiting for me.

My tooth dropped onto my lap.

I’ve never written a letter before. Love, or otherwise.

As much as I’ve been desperate to tell you how much I miss you, think about you until my head spins, my stomach constricts, it was Dr Franco’s suggestion that I write.

You must know, I intended to join you. I promise I did. But when it came to it, I couldn’t. Not now I had something to stay here for. I’m sorry.

It’ll be some time before I see you again and I can’t stop fretting that I never got to explain myself fully. Aside the brief, clumsy attempt you allowed me that day. That terrible day. I can’t even steady the pen as I write those words.

Anyway, I’ve decided to take his advice. Tell you everything. From the beginning. My account of it all. My side. Moment by moment. Hurt by hurt. Though Dr Franco insists there are no such things as beginnings; only the point from which someone is prepared to start telling their story. So, I’ll start from our beginning. And I promise it will be the entire truth. Something no one else shall know.

I often think about the first time I saw you; when they broke the news that Dr Williams had been killed at the weekend.

Dr Harris and Dr Short gathered everyone into the surgery waiting room, even menials like myself, and Harris relayed the shocking details. ‘You may as well hear it from me as there’ll only be speculation.’ Mrs Williams. An argument. The car that hit him as he ran across the road after her. How he was still alive when the ambulance arrived. How he was dead before they could get him into it. I heard it all. The terrible events. The intakes of breath. Linda blubbing next to me. I heard. But it was you that held my concentration.

You were the stranger amongst us. Kept your head down in respect. Or was it embarrassment? Your hair fell forward, in that way it does and when you glanced up, your eyes, pale, unsettled, unsettled me.

Dr Harris hadn’t been speaking long before Linda felt faint. With difficulty; her being built like a walrus, I eased her around the Country Life covered coffee table onto the nearest section of modular seating, before fetching her a glass of water as instructed.

You stood in the doorway. I could smell you. Lemons. My hand brushed yours as I passed, but I didn’t acknowledge you or smile. I walked on as if you were a ghost. On my return, you’d moved farther into the room and so there was no accidental touch.

As I’m sure you’ll remember, Linda’s reaction was stronger than everyone else’s. Possibly even than that of Mrs Williams. It was always obvious she’d had a thing for him. We, Linda, myself and Alison, were responsible for all the doctors’ admin as you know. But Linda coveted Dr Williams’ work. I could identify the glint through her cloggy eyelashes each time she had to go to his office. Poor Linda. The ‘speculation’ was that Mrs Williams was running away because she’d caught him with another woman. Another woman who wasn’t Linda. It wasn’t just his wife whom Dr Williams had betrayed.

I remember feeling conscious I didn’t look upset enough. Or shocked. But I was as shaken and moved by Dr Williams’ fate as much as everyone else. Only, I’d lost the ability to express. As you know, with me, it is all inside. Always inside.

With Linda now settled into a low-grade wail, Dr Harris brought the meeting to practical matters. As a private practice, there wasn’t the option of telling people there was a three-week wait for an appointment. He wasn’t prepared to lose money, dead partner or not. That was when he introduced you.

I never liked Dr Harris. Mainly because he was a wanker. But also, the way he’d always point – no, jab – with his party-sausage fingers, onto which he’d somehow managed to get a ring. I wondered about the woman who’d screw such a man for a nice house and car. I presumed that was her motive. But I couldn’t imagine a house or car spectacular enough.

‘Constance, I’ll draft a letter for you to send out to all Dr Williams’ patients. You and Alison call anyone due to see him today and give them the choice of rearranging with me or Dr Short for later this week or keeping their appointment and seeing Dr Stevens instead. Please encourage the latter.’ He summoned you farther into the room. ‘This is Dr Stevens from our Harley Street surgery.’

I was grateful I could now look at you directly. Take you in. Observe as you pushed your fine cotton white shirt sleeves further up your forearms, which you folded, unfolded, folded again before daring to draw the long breath which enabled you to speak.

‘Hello … I’m so sorry about Dr Wa … Williams. I know he was very much loved by you all. Although it’s in the saddest of circumstances I’m here, I look forward to working with everyone and getting to know you … and the patients.’

You delivered your stilted lines almost perfectly. Aside from that stutter with his name. Yes, I noticed. But I’m sure no one else did. You’d clearly been practising. I suspect out loud in your full-length bedroom mirror. And I could sense the relief once it had left your lips.

Your micro speech triggered Linda’s sobs into once again, gathering momentum. Dr Harris instructed Alison to call her a cab, and me to pack up Dr Williams’ belongings in his office. I didn’t want to. The idea scared me. His stuff. But I nodded subserviently as I always did.

I remained in the waiting room for a while, to prolong the task. Dr Harris had already left for his office. Alison was helping Linda on with her raincoat. You were shaking hands whilst talking in a low respectful voice with Dr Short. I wonder, were you suppressing a smile at him nearly being a giant at six foot seven? It always amused me. Stood next to him I looked like a tiny child. He treated me like one as well.

Throughout all this, you hadn’t noticed me once.

To further delay going to Dr Williams’ office, I headed to reception to pull up his appointments for the day. Alison was shuffling Linda out of the building, passing the responsibility onto a bemused taxi driver. The front door banged shut. Minus the crying all was quiet until Alison made her way to the desk. ‘I can’t believe he’s dead.’ She leant over the wooden ledge separating us to deliver her whisper.