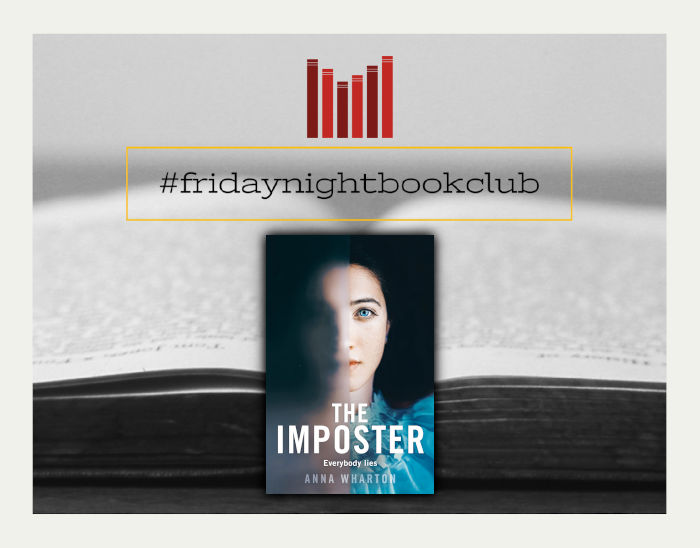 Treat yourself to a cup of hot chocolate this evening and this excerpt from Anna Wharton’s debut, The Imposter – a thought-provoking story of obsession, loneliness and the lies we tell ourselves in order to live with ourselves.

‘Keeps you guessing about the characters until the last page.’ – Good Housekeeping

They say you can’t choose your family … But what if they’re wrong?

Chloe lives a quiet life. Working as a newspaper archivist in the day and taking care of her nan in the evening, she’s happy simply to read about the lives of others as she files the news clippings from the safety of her desk.

But there’s one story that she can’t stop thinking about. The case of Angie Kyle – a girl, Chloe’s age, who went missing as a child. A girl whose parents never gave up hope.

When Chloe’s nan is moved into care, leaving Chloe on the brink of homelessness, she takes a desperate step: answering an ad to be a lodger in the missing girl’s family home. It could be the perfect opportunity to get closer to the story she’s read so much about. But it’s not long until she realises this couple isn’t all they seem …

In a house where everyone has something to hide, is it possible to get too close?

She treads carefully through the carnage. Plates and pans litter the kitchen floor, and rice has been scattered from upturned bags across the pretend parquet. On the counter, pointing towards the microwave, lies a banana – half peeled and turning brown. She presses the door of the little oven and it springs open, revealing a bowl welded by porridge to the small, transparent plate inside. She pulls the sculpture out and it separates in her hands as she does, crashing to the floor. Cold lumps of porridge splatter up Chloe’s trouser legs.

A voice from the living room.

She checks the clock on the wall. 5.09 p.m. She should still be at her desk. She sighs.

Chloe bends down and picks up the bowl. Making a cup of her hand, she scoops the porridge back into it.

Stella has been dead for years. Nan rarely remembers. Chloe plays along with her, knowing the world she’s in now is as real to her as this one is to Chloe. A world where her imagination has won and her daughter is still living.

Nan appears in the gap between the two rooms. Chloe looks up to see her standing there. She tries hard to picture this place when it still had doors and hinges. It feels impossible now. So much has changed. There have been different carpets over the decades, ones she only knows now from photographs. The years have drawn new curtains at the windows, new units in the kitchen, new furniture carried in and out through the hall. But Nan has always been a constant. She is Chloe’s constant. She is everything.

‘You’re not Stella. Who are you? And what have you done to my kitchen?’

‘You left your porridge in the microwave again, Nan,’ Chloe says. ‘And why are all the cupboard doors open and the cans on the worktop?’

Chloe sits back on her heels. She pushes her hair behind her ears, only remembering the gloopy mixture on her hands when she feels it stick to her cheek. ‘Oh, for God’s s—’

Nan has that look she knows. Chloe’s good at reading faces – she’s had a lot of practice. Nan’s face now looks like a lost little girl. She knows that one too well.

‘Who are you? Why have you messed up my kitchen? Where’s Stella?’

Chloe looks down at the lino floor and sighs at the mess.

‘Stella?’ Nan calls over her shoulder, and then to Chloe, ‘Get out of my kitchen.’

Her face is full of panic. Chloe stands up and walks towards her.

Nan covers her ears and starts to cry. ‘Stop shouting at me. Where’s Stella? I want Stella.’

Chloe glances at the kitchen clock. 5.13 p.m. She pictures her empty seat at her desk. The same desk her boss thinks she’s sitting at right now. The same one with mounting paperwork. Nan’s face crumples and Chloe looks around the only home she knows. She sighs, pulling Nan into her chest. Porridge clings to her shoulder, but Chloe holds her until Nan’s body relaxes into her own.

‘Stella hasn’t been here for months,’ she sobs. ‘When is she going to visit?’

‘Soon, Nan,’ Chloe says and places a kiss on the top of her head because, at times like these, that’s what she knows she’s meant to do.

Twenty minutes later Chloe closes the door behind her, feeling the safety of the key clicking inside the lock. The hallway has disappeared behind a thick curtain that guards the door when she’s not there. Not against intruders, but against Nan wandering out.

Nan is tucked up in bed now, a ham sandwich on her bedside table, tea in her flask. Chloe has reattached the note above the cooker reminding Nan not to turn it on, hidden the lead to the kettle and promised her she’ll be home again soon.

She makes her way back to the office in the dusk, through back streets, up and down kerbs – six minutes’ walk by shortcuts others are too afraid to take. Luckily she’s always felt more at home in the dark than the light.

Orange street lamps illuminate different patches of path. A group of teenage boys jeers from the swings. One throws an empty can at her as she passes.

She walks through the underpass, takes the stairs two at a time, pushes through the double doors. The daytime buzz of the office has made way for a hum now; computer screens are black and lifeless; coats lifted have left the backs of chairs naked. A note from her boss, written in angry spidery handwriting, waits on her desk:

That’s the third time this week you’ve done one of your disappearing acts.

She screws it up and pushes it deep into the rubbish bin. Beside her a tower of filing wobbles a polite reminder. There is still porridge on her shoes. She doesn’t know where to start. She never does.

After a few moments, her screen falls back to sleep. She checks the time – nearly six. They’re being replaced by machines; this newspaper archive is moving into the new millennium and finally switching to digital. Chloe can’t afford to miss any more time off work, she’s already in competition with a motherboard for the only job she’s ever known.

The day’s newspaper lies open on her desk just as she left it: two gaps in the top right-hand corner, her scalpel filling the place where the stories once sat. She grips the small knife and turns the page.

As the hours pass, the sky darkens outside. A beep from the end of the office signals the arrival of the cleaner. He bundles in, knocking his Henry hoover against filing cabinets that protest with a metallic yelp. The rustling starts, the emptying of bins, and ceiling lights dozing behind frosty panels flicker into life to keep him company. At the other end of the office, Chloe begins to file away the stories she’s gathered, the thick pile of envelopes thinning out in her hand until there are none left.

It’s late, black licks at the windows, and the tinny sound from the cleaner’s headphones edges closer. Chloe returns to her desk and switches off her computer. Today’s newspaper is a skeleton now, picked of flesh. She pushes it deep into the recycling bin.