Friday Night Book Club: Read an excerpt from All That Glitters – the new book from Danielle Steel, the world’s favourite storyteller! 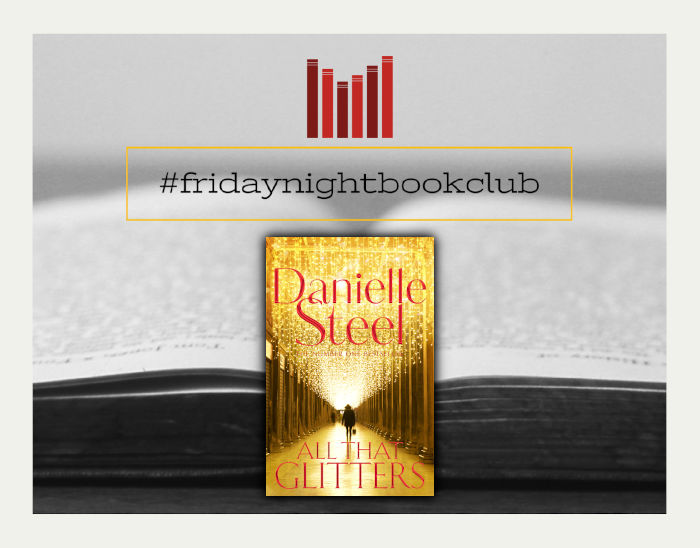 From New York to London to St Tropez, All That Glitters by Danielle Steel is the story of a young woman finding her place in the world and learning the hardest lesson of all – who to trust.

Coco Martin, the adored only child of wealthy parents, has lived a charmed existence in their beautiful Manhattan home, and summers in a fabulous Hamptons house. Despite her privileged upbringing, Coco’s parents instilled in their daughter their own values of hard work, honesty and kindness.

But as she’s just entering her twenties, Coco’s world is devastated by the sudden death of her beloved parents. Now the heir to a considerable fortune, Coco must find her way in a world that no longer makes sense to her. The estate is protected by a trustee, a close friend of her mother and father. But is he the honourable man she believes him to be?

Beginning a new life in London, she falls in love with a charismatic, handsome, penniless aristocrat, who introduces her to a world of fabulous parties and extravagance. Coco’s oldest friend Sam fears that this whirlwind romance won’t last, but Coco is sure that she has finally found happiness. In the middle of London’s glamorous social scene, Coco struggles to see things as they really are …

Coco Martin, officially Nicole, was a striking looking young woman with dark hair and green eyes. She had a stunning figure, and the poise of someone older than her years. What made her remarkable and even more appealing was that she was totally unaware of her great beauty. She was modest as well as spectacularly beautiful. Men had stared at her for years and she was oblivious to them. Women would have been jealous of her, but she was so kind to everyone that they forgot what she looked like, and genuinely liked her. She had turned twenty-one at the end of last year, and had just finished her junior year as a journalism major at Columbia University. It had been a major coup when she landed a summer internship at Time magazine. She’d found the notice on the bulletin board in the school of journalism. The position was intended for graduate students, but after her interview, they had been so impressed that they had hired her. She was thrilled. She had started two weeks before and she was excited to have the opportunity to work at such a prestigious magazine.

It was a hot Friday in July when she boarded the jitney in New York for the three-hour trip to Southampton to spend the weekend with her parents. She was an only child, and had always enjoyed an unusually close relationship with them, even when she was very young. They treated her more as an adult than a child, and took her everywhere with them. They had had some wonderful trips together, and welcomed her among their friends when they entertained. The three of them enjoyed one another’s company. Tom and Bethanie were proud of their only daughter.

Their marriage had gotten off to an unusual start when they were young themselves. They had met when they were both in college and fell madly in love, although they came from vastly different backgrounds. Martin had grown up dirt poor, as he readily admitted, in the Midwest. He had gotten a full scholarship to Princeton, and it changed his life. His parents would have been more than satisfied if he had wanted to be a plumber or electrician, or at the most maybe an accountant. But Tom had never accepted his parents’ limited vision for him. His friends in college convinced him that it was more profitable to manage other people’s fortunes than try to make his own from scratch. After Princeton, he got an entry-level job at a New York bank and eventually, after working diligently, with Bethanie’s help, he attended Wharton, and in time became one of the most respected investment advisors in New York. He was a quiet, discreet man, not given to showing off, although he had a business partner, Edward Easton, who was far more visible and one of the well-known stars in the business.

Like Coco, Bethanie had been dazzling when Tom met her, a stunning beauty and a lively, creative young woman. She was studying photography in the department of visual arts at Brown University, and had genuine talent.

Bethanie was from a venerable old New York family. Both she and Tom were only children and she had made her debut the year before she met Tom. They had fallen in love when they were both nineteen, had met at a party in New York and had been together ever since. When Bethanie told her parents they wanted to get married after they graduated from college, they’d objected strenuously, and thought that Tom would never amount to anything. They wanted her to marry someone from their own social circle, not a poor boy from a simple background with ambitious dreams. They didn’t see how he could go very far. Bethanie saw all his strengths and merits, and had total faith in him. Even if he would never become a material success, and remained poor forever, she loved him. When her parents flatly refused to agree to the marriage, two weeks after they graduated, Bethanie and Tom pooled what they had in their checking accounts, went to Las Vegas for the weekend, and got married in the Elvis Chapel. The Monday after, she faced her parents with the news, and they were outraged.

Tom took the bank job he’d been offered, and found work waiting on tables at night to save for business school. Bethanie refused to accept her usual allowance from her parents and took freelance photography jobs, and worked as a waitress with him at night. They lived on what they made and saved all they could. And eventually Tom went to Wharton and got his MBA. Coco had come along by then. And in the end, they proved Bethanie’s parents wrong, and won their respect and admiration. When Tom became successful, he bought his own parents a house.

The two things Bethanie lived by, and had said to her daughter frequently, were ‘Don’t play by other people’s rules’ and ‘Think outside the box.’ She said that one of the worst things in life was to have no dreams. Coco’s parents had convinced her that she could do anything she wanted to, if she was willing to work hard and face whatever challenges came up.

Coco’s parents were shining examples of perseverance, courage, and hard work to achieve their goals. Her father had certainly done that. They had never given up their dreams, or lost faith in each other. Twenty-four years after they married, they were still in love, and Tom was still in awe of his beautiful wife. She had been staunchly at his side for richer or poorer, just as she had promised in the Elvis Chapel. Their wedding pictures still made them smile.

Their parents had been older, which was something they had in common too. All of them had died when Coco was very young, and she had grown up without the advantages or complications of grandparents. Her parents had been her whole world, and she was the focus of all their love and attention. As he made his fortune, Tom had acquired a patina of sophistication, with Bethanie at his side, showing him the way.

They had a beautiful apartment in Manhattan, on Fifth Avenue, with a Central Park view, and a sprawling, comfortable, luxurious house in Southampton, right on the beach. Coco loved spending time with them. She was going out for the weekend to tell them all about her internship at Time and what she’d done that week. Bethanie and Tom had sent Coco to one of the best private coed schools in New York, which she had attended through high school. It was where she met her best friend, Samuel Stein. She had girlfriends too. She was an independent thinker, but never hung out in cliques, and her closest friend since she was in fourth grade had been Sam. They had hung out in school together and went everywhere together, even though he was a year older and a grade above her. And despite differences of gender, background, and religion, they were kindred spirits and soul mates from the moment they met. She told him everything, as he did with her. He satisfied her need for male companionship and was like a brother, and loyal friend, who gave her excellent advice once she started dating.

Sam’s religious Orthodox Jewish parents were uncomfortable about their friendship from the beginning, and found it strange that a boy and girl would be best friends. Their greatest concern was that eventually, when they got older, their closeness would turn into romantic feelings, and they would fall in love and want to marry. Sam’s mother, Zippora, particularly didn’t want that to happen, although his father didn’t want it either. When the time came, they wanted Sam to marry within their faith. Zippora kept a kosher home. They celebrated Shabbat every Friday night, and obliged Sam to go to synagogue with them on Saturdays. He was the oldest of four children, and had two sisters and a brother. The others had gone to a religious school in Brooklyn, but they sent Sam to a more liberal, nonsectarian school in the city, and were never sure it had been the right decision. But he had flourished there and was an excellent student, which was their main goal for him.

Eventually his next youngest sister, Sabra, gave them real cause for concern. She fell in love with Liam, an Irish Catholic boy she’d met at an interschool high-school conference on diversity, and she was determined to marry him after they graduated from college. She was even willing to convert for him. That took the heat off Sam and his friendship with Coco, and caused the Steins even more anxiety than Coco did.

Sam was a year older than Coco, and had just graduated as an econ major from NYU. Coco had gone to his graduation and his parents had been polite to her, as they always were, but having known him for twelve years, she knew how they felt about their being best friends. They made no secret of it, and lectured Sam constantly about the danger of their being friends.