For heart, soul – and stomach: Sally Andrew chats about The Milk Tart Murders – the latest in her hit series the Tannie Maria mysteries
More about the book! 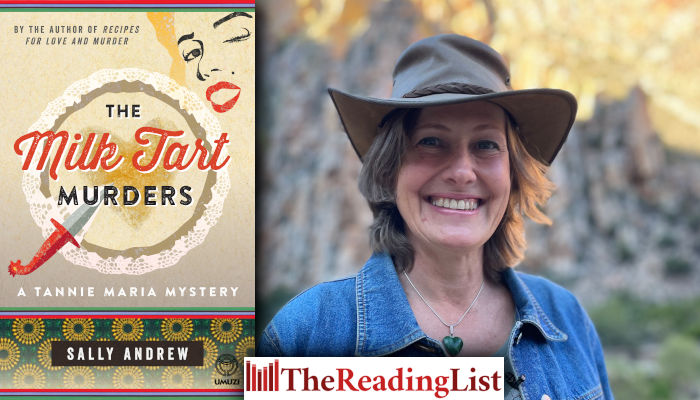 From muesli-buttermilk rusks via the delectable Venus cake to milk tart. Yes, our beloved sleuth – and giver of sound advice and recipes – Tannie Maria, is back. Author Sally Andrew shares her love for this unique character.

I just love The Milk Tart Murders cover. How often can one combine a milk tart with Marilyn Monroe? And I get to dress up as Marilyn! At the book launches I usually don the clothes of one of the characters. For Tannie Maria mystery number one, Recipes for Love and Murder, I dressed up as a debu-Tante in a red silk dress. For book two, Tannie Maria and the Satanic Mechanic, I wore my green overalls, and for the last one, Death on the Limpopo, I dressed in black leathers like the book’s journalist, Zabanguni Kani. And now I get to doll up as Marilyn! I have a dress that might work … but I still need to find the right wig, and the right make-up artist to help me transform into the actress herself.

Each book in the Tannie Maria series is set in a different season, and ends with a feast on Maria’s stoep. The Milk Tart Murders is in spring, and begins with the chirruping of swallows, a marriage proposal, and a lemon drizzle cake. But things get a lot less tra la la lovely for Maria from there on. Murders. Relationship troubles with Henk. A fall-out with Jessie, her best friend at the Gazette. Maria buries herself in food, but it doesn’t perform the magic it used to. The poor woman … I’ve promised to give her a much easier time in book five (a Tannie Maria cookbook with a short story).
The first murder takes place in Oupa Frik’s Fantastiques, during the screening of a vintage Marilyn Monroe movie. Maria says:

‘Henk held my hand. The movie was Some Like It Hot. Black and white. With Marilyn Monroe and Jack Lemmon. It was funny and sweet, and sometimes scary, when people were killed. For a while it seemed like everything was going wrong and there was no hope for the lovers. But then, in the end, everything turned out all right. Movies should always be like that because real life often isn’t. We need to live in hope, or else why keep going? We want to believe pain and sorrow are things that will pass with the wind, and that love and happiness can belong to us. Like the earth beneath our feet.’

Maria and Jessie are on the trail of the murderer, and find clever clues hidden in the collectables shop. Of course, they also use food (including the fantastic Karoo Zoo soetkoekies) to get people talking … And then there’s the naartjie Milk Tart, the last request of a man stabbed with an antique dagger.

I am grateful to all the readers who love Maria. It feels like I have loads of friends, because any friend of Maria’s is a friend of mine. While I have Maria’s company most of the time, I’m sad others have to wait so long to spend time with her and her chommies. But I take quite a while to write, edit and polish my books, as I want the words to sit nicely – not only the page, but also in the body, heart and spirit of the reader.

As well as solving a murder mystery, Maria always goes on a healing journey. I choose an archetypal theme that I also need to work on. In this book Maria grapples with jealousy. And explores how this relates to her sense of self-worth. All sorts of exciting things happen both inside Maria as well as in the murder plot. (A grave! A bulldozer! A goat called Mildred!) I don’t want to ruin the meal for you, but here’s another bite from The Milk Tart Murders:

‘Aren’t they too old for bedtime stories?’ Jessie asked.

‘I must close their hok door, to keep out the jackal and the rooikat.’

Sometimes a thin layer of mesh is all that stands between life and death.

The Milk Tart Murders: A Tannie Maria Mystery is out now.