Find out more about Lesley Pearse’s new novel Suspects (PLUS: Read an excerpt!)
More about the book! 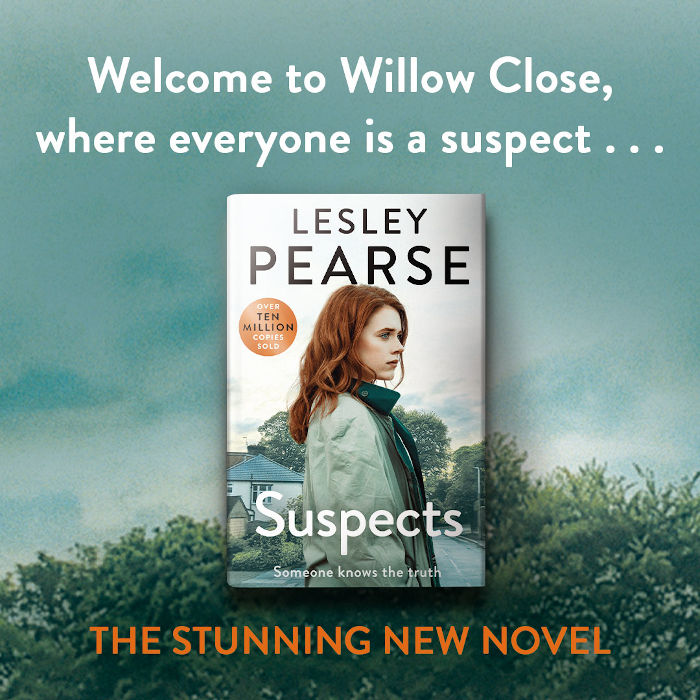 What do you do when your dream home becomes your worst nightmare?

When Nina and Conrad move into their new home in Willow Close a body is discovered.

Hurrying inside, they see horrified neighbours gather by the police cordon – one of the residents has been attacked and brutally killed in the woods. Believing someone must have seen the murderer, the police interview all the residents and soon find out that each neighbour harbours their own secrets. They are far from what they initially seem and strange, even dark, things happen behind their closed doors.

Nina and Conrad had thought they’d found their dream neighbourhood. But have they moved into a nightmare?

“‘What on earth has Harry got now?’ Maureen Willis asked her husband, Rob, pointing to their Border terrier who appeared to have found something interesting some way ahead of them under a bush.

‘Harry. Leave it!’ Rob yelled. He looked back to his wife, making a shrugging gesture of resignation. ‘Please don’t let it be a fox poo? It’s baking hot already, and we’ll never get the stink off him.’

The couple sped up to get their dog under control. Rob reached him first, and Maureen heard him gasp in horror.

‘What is it?’ she called out, panting a little.

Rob had stopped short. Even from a distance Maureen could see by the way he’d clapped his hand over his mouth it was something gruesome.

‘Don’t come any closer,’ Rob called out, waving his arms as further warning, then he bent over to put the dog on his lead.

Rob looked down at the young girl sprawled on the ground, half under a bush. Long blonde hair, matted with congealing blood, covered her face, bare arms and clothing. He could tell by her coltish limbs she was no more than twelve or thirteen. His stomach heaved at the savage attack.

Turning away, he called back to Maureen, ‘Call the police, love. It’s a child who has been attacked. I’m pretty certain she’s dead.’

At nine-thirty that same morning, Conrad Best drove a hired van loaded with his and his wife Nina’s belongings into Willow Close. He paused for a moment, taking in the carefully tended open-plan front gardens and the serenity of the close. He turned to Nina in the passenger seat. ‘Do you think we could be in ‘Swingers’ territory?’

Nina laughed. She could always rely on Conrad to think of something smutty. But she could follow his thinking. Although in her opinion, Willow Close in the bright sunshine was more Stepford Wives than Swingers. Everything was perfect from the neat borders of petunias and busy lizzies to the snowy white nets at sparkling windows, and recently washed and waxed cars gleaming on the drives.

But maybe Conrad had picked up on something else, a darker side to such perfection? Was it possible the residents threw parties where they swapped partners? If so, she hoped they weren’t watching her and Conrad right now, with a view to drawing them in.

‘Just keep that thought to yourself. I want to get on well with my new neighbours,’ she said, reprovingly. Conrad had no filter; he was quite likely to come right out and ask someone which people were Swingers.

‘It’s so good to finally get a house of our own. Even the sun is shining today.’

‘And the police have come to welcome us.’ Conrad pointed out a squad car parked just beyond their house. ‘Unless of course a Swingers party got out of hand?’

‘You always think the worst,’ Nina giggled. ‘The car might not be here on official business, maybe the policeman lives there and has just popped home for a coffee?’

Conrad parked up the van outside the garage of number three, and looked thoughtfully across the road, where some neighbours had suddenly come out of their houses together. ‘Look at that lot? They’ve come out for more than a lost dog, or a broken window.’

Nina saw he was right. The body language and facial expressions of the people clustered together suggested they were discussing something distressing.