Find out more about Danielle Steel’s new novel Neighbours, and listen to the author talking about her incredible career and her writing process
More about the book! 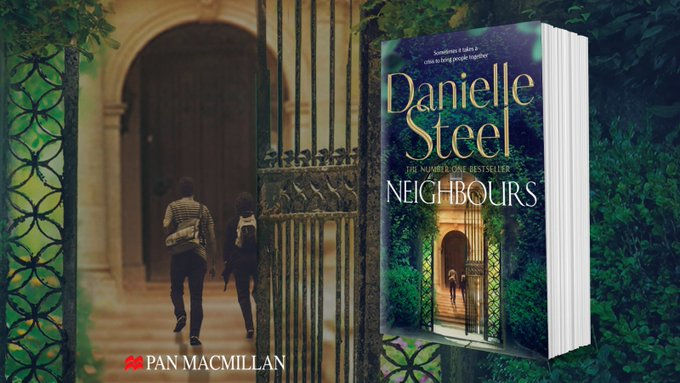 Neighbours by Danielle Steel is out now from Pan Macmillan SA!

Steel is the world’s bestselling living author. She has written over 150 books, all of which are still in print, and 25 of her novels have been adapted into films.

In Neighbours, a reclusive woman opens up her home to her neighbours in the wake of a devastating earthquake, setting off events that reveal secrets, break relationships apart, and bring strangers together to forge powerful new bonds.

Scroll down to listen to Danielle Steel talking about her books and her writing process!

Sometimes a crisis can bring people together …

Meredith White was one of Hollywood’s most recognisable faces. But a personal tragedy cut her career short and alienated her from her family. For the last 15years, Meredith has shut herself away from the world, living in her San Francisco mansion.

Then, on a late summer day, a devastating earthquake strikes, plunging the city into chaos. Without hesitation, Meredith invites her now homeless neighbours into her largely undamaged house as the recovery begins. From the respected doctor, to the beautiful young woman whose boyfriend views her as a rich man’s toy, to the brilliant concert pianist in his eighties, each has a story and a closely guarded secret that will slowly be revealed.

Strangers become friends and relationships are forged as they support each other through not just the aftermath of the earthquake, but their own personal crises.

As Meredith finds herself venturing back into the world she suddenly sees her isolation, her estranged family and even her career in a whole new light. And thanks to the suspicions of one of her new acquaintances, a shocking truth in her own life is exposed.

Neighbours, by the world’s favourite storyteller Danielle Steel, is a novel of friendship, support, trust and love, and what it takes to bring people together.

In this interview Danielle discusses her career and her writing process: