‘During his second term in office, Jacob Zuma claimed to have been poisoned on three separate occasions’ – Read an excerpt from Imraan Coovadia’s new book The Poisoners
More about the book! 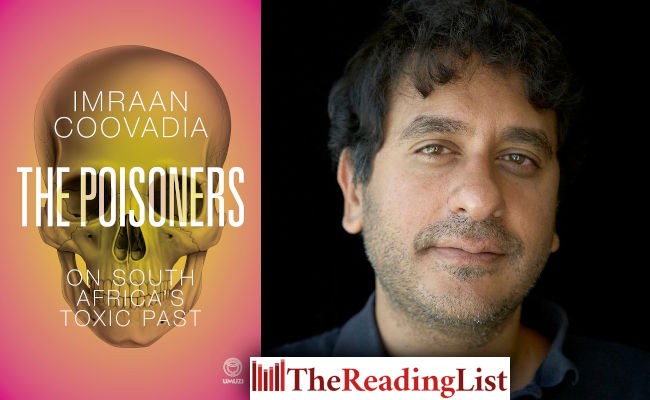 Penguin Random House has shared an excerpt from The Poisoners, the new book by Imraan Coovadia.

The Poisoners is a history of four devastating chapters in the making of the region, seen through the disturbing use of toxins and accusations of poisoning circulated by soldiers, spies, and politicians in Zimbabwe and South Africa.

On 4 February 2020, a court in South Africa issued a bench warrant for the arrest of Jacob Zuma. Judge Dhaya Pillay, a friend of my family, issued the warrant, which was suspended for four months to allow Zuma to explain his failure to appear. Judge Pillay’s warrant stimulated threats of retribution from the former president’s clients and allies who still dreamed of reclaiming the country for their own.

On judicial grounds, the decision to issue the warrant was straightforward. The court had been offered a doctor’s note, signed by a Dr Zakes Motene, on which the date had been altered. In addition, the diagnosis that was given was unusually generic. In the space provided to describe his patient’s ‘medical condition’, Motene had simply written ‘medical condition’. According to friends of the former president, the vague language was required to protect Zuma’s privacy. They reported that he had been poisoned and forced to seek treatment from the friendly government of Cuba.

Zuma’s fears have a strange flavour, but behind them, as I discovered, are the stories of what was done in this country and what was never supposed to be revealed and what will never be atoned for. The stories in this book should have been fully explored and pursued by prosecutors, politicians, reporters and historians. In their absence, these abandoned stories have fallen to a writer whose preoccupation in recent years – to offer a line of explanation for myself – has been the mechanism of good and evil that is set in motion whenever human beings divide themselves into separate, hostile camps. It is a problem that is somehow both too simple and too complicated to consider directly, too tied up with human nature and history, but that may become clearer at the bottom of a vial of poison.

During his second term in office, Jacob Zuma claimed to have been poisoned on three separate occasions. Shadowy sources close to the president fingered the culprits as members of an unholy alliance between one of his disappointed wives, his opponents in the ruling party, including his deputy, Cyril Ramaphosa, and foreign intelligence agencies drawn from outlandish images of the Cold War. The issues at stake in Judge Pillay’s warrant were heightened by the fact that she had already found him guilty of defaming a former cabinet minister, Derek Hanekom, whom Zuma had called a ‘known enemy agent’. Zuma believed, or said that he believed, that he was in possession of a list of spies that had been circulated three decades before by a man who died of what seemed to be poison. No one could say for sure whether it had been administered by the security branch, by his rivals in the African National Congress (ANC), or by a double agent who feared exposure. Indeed, no one could be sure that poison had been administered at all. So, I was surprised some years ago when a conversation with Justice Albie Sachs revealed his conviction that Zuma had indeed been poisoned, perhaps by a love philtre, as well as the fact that Sachs had been present when Cyril Raymond, the author of Zuma’s list of alleged traitors and double agents, was taken ill. Justice Sachs is capable of being in more places than seems humanly possible.

The true incidents in this history, which spans the region from Cape Town to Luanda and Maputo, have been forgotten or obscured by the destruction of records and the abuse of legal proceedings. At the same time, invented stories of poisonings that never took place have been associated with the very gravest chapters of political life: changes in who has control of the major states of southern Africa. Zuma’s fears of being poisoned were realised, in a certain sense, when he lost control of his party at the ANC’s Nasrec elective conference in December 2017.

In Zimbabwe, Robert Mugabe had been removed not a month before by his deputy, Emmerson Mnangagwa. The succession crisis north of South Africa’s border began in earnest when Mnangagwa accused Mugabe’s wife of having him poisoned.

Two simultaneous changes of government in neighbouring countries, which turned on fantasies of poisoning: the conspicuous result of an underground current in our history that includes counter-insurgency, assassination, intrigue and suspicion inside revolutionary movements.

Poisoning is secretive and ruthless, a product of concealed hostility or a kind of passionate indifference to human well-being. The history of southern Africa shows that societies in which the moral system is distorted by racial enmity have been hospitable to public and private poisoning.

Given its standing as an established evil, poisoning has been used surprisingly often to decide between right and wrong. In the highlands of Madagascar, for example, poison was an instrument of the judicial process. By tradition, it was administered to a rooster belonging to the accused, although on occasion a dog was used in its place. If the animal survived, the accused man or woman would be declared innocent. King Andrianjaka, who ruled in the first decades of the seventeenth century, changed the ancient rules to disastrous effect. He ordered that the poison, which was extracted from the nut of the tangena tree, was to be ingested by the accused person rather than the animal.

Andrianjaka’s decision engendered mass killing, claiming an estimated two per cent of the population each year. (To put that in context, Germany lost a similar fraction annually during the Second World War.) In 1838, one-fifth of the members of the Merina kingdom are said to have died by the poison ordeal, a hundred thousand souls. The guilty and the dead were further dishonoured by being excluded from family graves. Centuries of needless slaughter were brought to an end in 1863, when King Radama II outlawed the practice of judicial poisoning, prompting a wave of reburials.

In the Kazembe kingdom on the shores of the Mofwe Lagoon, in modern-day Zambia, the poison ordeal was an antidote to witchcraft.