Don’t miss Tsitsi Dangarembga and Achmat Dangor for a Literary Crossroads event at the Goethe-Institut
More about the book! 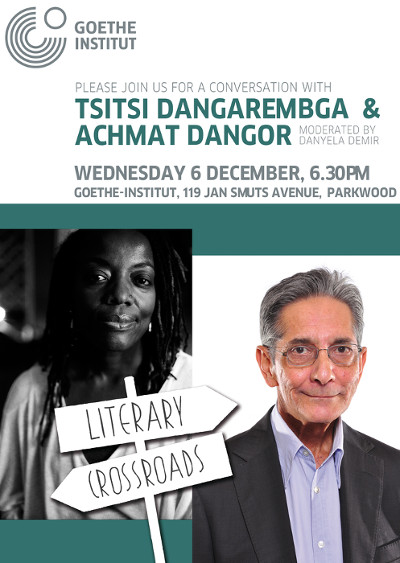 Join the Goethe-Institut for a Literary Crossroads event with Tsitsi Dangarembga and Achmat Dangor!

The conversation will be moderated by Danyela Demir.

Literary Crossroads is a series of talks where South African writers meet colleagues from all over the continent and from the African diaspora to discuss trends, topics and themes prevalent in their literatures today. The series is curated by Indra Wussow and Sine Buthelezi.

Writer, filmmaker, teacher and cultural activist Tsitsi Dangarembga lives in Harare, Zimbabwe, where she directs the Institute of Creative Arts for Progress in Africa Trust, an institution focusing on the role of all arts disciplines in development, which she founded in 2009. She is currently working on her 4th novel, dystopian young adult speculative fiction Sai-Sai, Watermaker.

She began writing plays at the University of Zimbabwe, where The Lost of the Soil (1983) and She No Longer Weeps (1984) were first staged. The first volume in the Tambudzai trilogy, Nervous Conditions, appeared to critical acclaim in 1988. Its sequel, The Book of Not, was published in 2006. Her third novel, This Mournable Body, is forthcoming from Graywolf Press.

Achmat Dangor, a writer by vocation, has also been a political activist from a young age. During the turbulent 1970s, together with 13 other writers, he founded a group called Black Thoughts. Its mission was to overcome the rigid education system the Apartheid government had imposed on Black schools, forcing children to learn in Afrikaans, and severely restricting what they could read. Black Thoughts did readings in township schools and churches, introducing scholars and the public to the work of ‘Third World’ writers, including South African books that had been banned.

The Black Thoughts writers themselves were ‘banned’ by the apartheid government, which prohibited them from attending any gatherings. Achmat found employment under the Leon Sullivan code with the American company Revlon, where he was trained as packaging engineer. He subsequently entered the development sector where he was CEO of various organisations, including the Kagiso Trust, the Nelson Mandela Children’s Fund and the Nelson Mandela Foundation. He was also Director of Advocacy at UNAIDS, and the Ford Foundation’s Southern Africa Representative. He continued writing throughout the years. Now retired, he is devoting himself to his writing.

He received the 2015 Lifetime Achievement Award from the South African Literary Awards (SALA).