Don’t miss the launch of Like Water is for Fish: The Power of Story in Our Lives by Garth Japhet, co-founder of Soul City Institute and founding CEO of Heartlines (3 Mar)
More about the book! 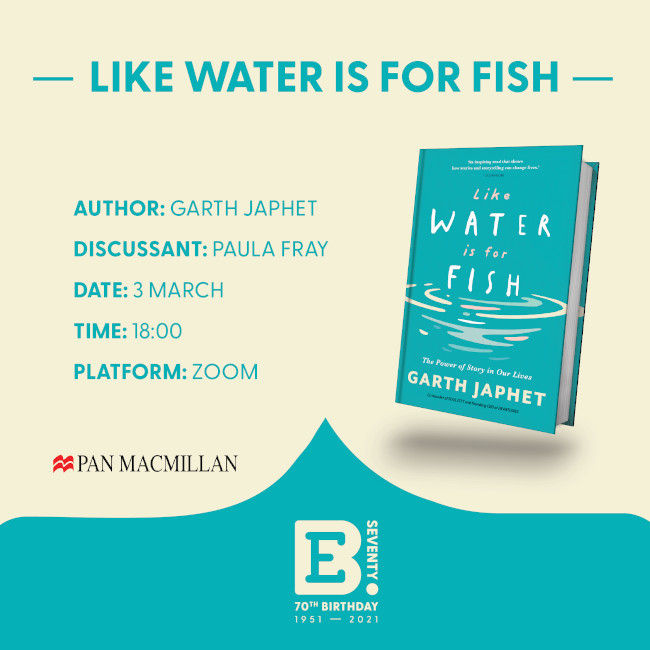 Join Pan Macmillan for the online launch of Heartlines CEO Garth Japhet’s new book, Like Water is for Fish, hosted by Paula Fray and Exclusive Books.

Join us next Wednesday for the online launch of Heartlines CEO @garthjaphet’s new book, Like Water is for Fish, hosted by @paulafray, and @ExclusiveBooks.
Sign up here: https://t.co/IzkSsosaDc#LikeWaterisforFish pic.twitter.com/OVeV5kUHuh

The Soul City and Soul Buddyz series are memorable for the way in which they integrated health topics into compelling storylines on TV, radio and in print, creating stories so popular that they entertained and informed millions of people. And the Heartlines’ ‘What’s Your Story?’ programme and films such as Beyond the River, continue to provide witness to the transformative power of story.

As a young boy, Garth Japhet found his life radically shaped by the Jungle Doctor series of books. The stories so enthralled him that, against all advice, he set his heart on medicine. He could see his future – with a backdrop of savannas, golden sunsets, adventure and accolades – as a romantic figure, a healer, a hero.

This fantasy sustained Garth through the challenges of medical training, but finally he arrived. He was Dr Japhet, living the dream. Except the dream was a nightmare. The reality of medicine was not the life he had hoped for. There were times when he cursed the power of the story that had so completely messed up his life. Having struggled with anxiety most of his life, he was catapulted into a deep depression.

And then it happened. Garth stumbled upon the healing power of story – fictional, factual and his own. What magic was at work here? If stories had changed him, could he use story to change others? This question set him on the journey described in Like Water is for Fish; a journey that led to Garth co-founding Soul City and Heartlines, and to an understanding that story, in its multiple forms, is as essential for our lives as water is for fish.

When you share your story with others and they share theirs with you, barriers break down, hardened attitudes shift, and healing begins.