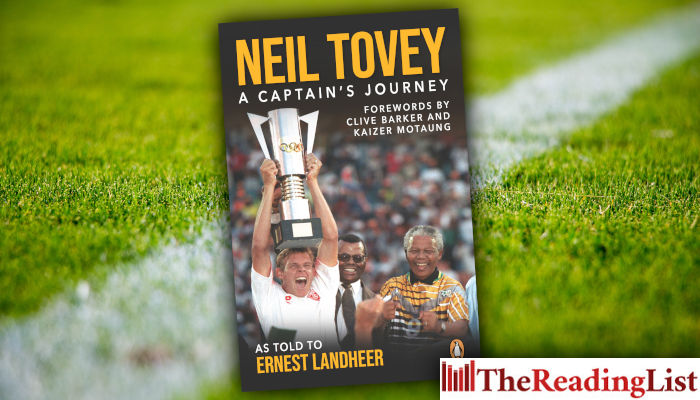 Penguin Random House and The Book Lounge invite you to the launch of A Captain’s Journey by Neil Tovey.

The former captain of Kaizer Chiefs and Bafana Bafana will be in conversation with Clint Roper at the launch.

‘This book is the life story of one of the great legends of South African soccer. It’s about true leadership, his passion for the game of football and his love for his country.’ – Kaizer Motaung

A Captain’s Journey is written as told to former Kick Off magazine contributor and Kaizer Chiefs’ research and publishing manager Ernest Landheer.

South Africans of all races remember the moment when Neil Tovey raised the Africa Cup of Nations trophy in 1996, with Nelson Mandela at his side wearing his number 9 jersey. It still represents South Africa’s greatest success in international football.

In A Captain’s Journey, his long-awaited autobiography, Tovey tells his fascinating life story, describing his modest upbringing in Durban, his entry into a mainly black sport in a deeply segregated 1980s South Africa, and his time as captain of Kaizer Chiefs and Bafana Bafana. He recalls his introduction to ‘muti’ rituals by team members and his growing popularity among Chiefs supporters, who nicknamed him Mokoko (boss chicken).

Tovey also writes about his experiences as a coach and as technical director of the South African Football Association (SAFA), and shares his insights about the state of the sport today. He talks frankly about his family life and about surviving two heart attacks, and gives insights into leadership and success.

This book will appeal to all football fans, but it is also a fascinating story of a man who has lived a truly South African life.