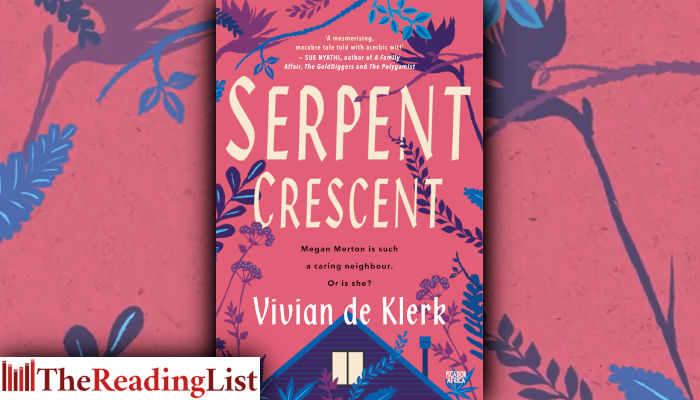 Pan Macmillan has revealed the cover for Serpent Crescent – the new novel by Vivian de Klerk!

Serpent Crescent will be on the shelves at the end of February.

‘A mesmerising, macabre tale told with acerbic wit!’ – Sue Nyathi, author of A Family Affair, The Gold Diggers and The Polygamist

Welcome to Qonda, South Africa.
A small, rural town where everyone knows everything about everyone. And then there's Megan Merton, a pillar of the community… and a secret sociopath.@ViviandeKlerk's #SerpentCrescent will be in-stores at the end of Feb!#CoverReveal pic.twitter.com/6qRnQyqNba

In the small rural town of Qonda, South Africa, the power and water supplies are unreliable, property prices are down, and citizens are slowly suffocating in the acrid smoke from the municipal dump. Recently retired English teacher Megan Merton has lived here all her life, most of it at No. 8 Serpent Crescent. So who better than this self-styled pillar of society to shine a spotlight on the
decline and dysfunction, not to mention the dubious activities, past and present, of many of her neighbours. Nefarious deeds and bad behaviour deserve harsh treatment and appropriate retribution, if not consignment to one of Dante’s fiendish nine circles of hell. At least that’s what Megan believes – in fact she’s been taking matters into her own hands, unnoticed, for years. And
now she has decided to write it all down, to shake all of the skeletons loose, and rejoice in the inventive punishments she devised and personally delivered to the wicked.

Then her neighbour Elizabeth Cardew, a lecturer in Classical Studies, suffers a stroke and Megan is entrusted with the keys to No. 9. While Elizabeth begins a long recovery at the local care facility, Whispering Pines, Megan relishes the chance to snoop. Curious as to ‘what a stroke victim looks like’, she decides to visit and see for herself.

A bond develops between the two women – one a cold and calculating sociopath, the other a courageous and lonely academic – something that takes both of them by surprise.

Vivian de Klerk had a distinguished academic career in Linguistics and then as Dean of Students at Rhodes University for over 30 years. In 2020, her debut novel, Not to Mention, was released to much critical acclaim. Married to a palaeontologist, Vivian currently lives in Gqeberha, where, along with writing fiction, she enjoys playing tennis, walking on the beach and the occasional game of bridge. Serpent Crescent is her second novel.