Cover and details revealed for Craig Higginson’s new novel The White Room
More about the book! 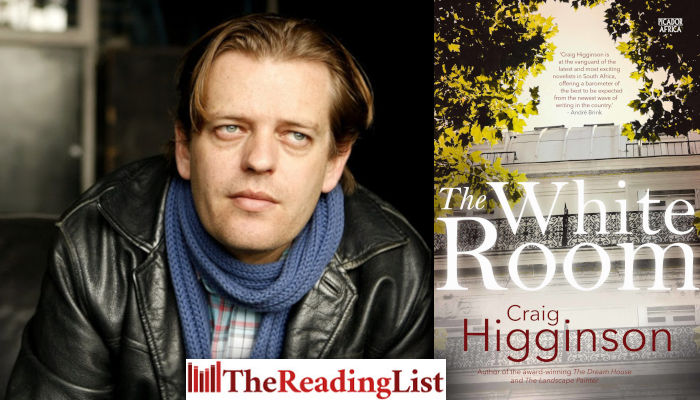 The White Room, the new book from Craig Higginson, will be out from Picador Africa in August.

South African playwright Hannah Meade arrives in London for the opening night of her new play. She has arranged to meet Pierre, the student she was in love with when she taught English in Paris. During their time together, they lied their way towards truths they were too young and inexperienced to endure. Perhaps this time they will have a second chance.

As the reader is drawn from contemporary London back to Paris on the eve of the war in Iraq, the mystery of past events is brought to vivid life in a series of dramatic, intriguing and deeply moving encounters.

Written in layered, stark prose, The White Room lays bare many of our assumptions about language, identity, memory, loss and love.

Craig Higginson is an internationally renowned, multi-award-winning playwright and novelist. His previous books include The Hill, Last Summer (M-Net Literary Award finalist) and The Landscape Painter (winner of the UJ Prize for South African Literature in English and an M-Net Literary Award finalist). The Dream House, published by Picador Africa in 2015, won the UJ Prize for South African Writing in English and was shortlisted for the Sunday Times Barry Ronge Fiction Prize. The Dream House was published in French in 2016 (Mercure de France); Last Summer followed in 2017.

Higginson’s plays include Dream of the Dog, The Girl in the Yellow Dress, The Jungle Book, Little Foot and The Imagined Land (all published by Oberon Books, London). His plays and directing have been nominated for and won several awards in South Africa and the United Kingdom, including winning the Sony Gold Award for the Best Radio Drama in the UK, an Edinburgh Fringe First, as well as Naledi Awards for Best South African Play and Best Children’s Play. His plays have appeared at the Royal Shakespeare Company, the National Theatre in London, the Traverse Theatre Edinburgh and the Trafalgar Studios in London’s West End.