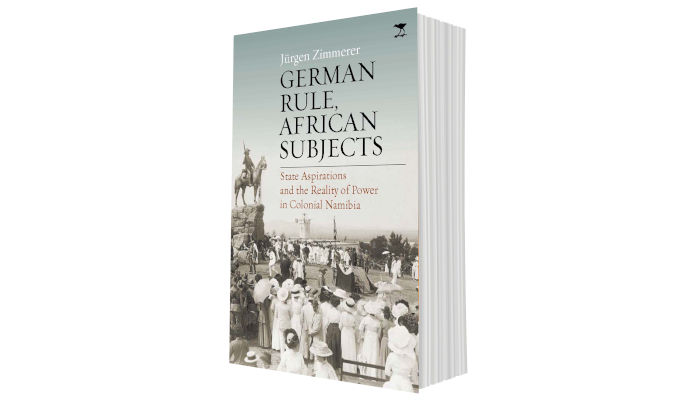 German Rule, African Subjects: State Aspirations and the Reality of Power in Colonial Namibia is out now from Jacana Media.

Although it lasted only thirty years, German colonial rule dramatically transformed South West Africa. The colonial government not only committed the first genocide of the twentieth century against the Herero and Nama, but in their efforts to establish a ‘model colony’ and ‘racial state’, they brought about even more destructive and long-lasting consequences.

In this now-classic study – available here for the first time in English – the author provides an indispensable account of Germany’s attempts to make a colonial utopia in what is present-day Namibia. This book shows how the highly rationalised planning of Wilhelmine authorities ultimately failed even as it added to the profound immiseration of the African population.

German Rule, African Subjects sketches out the nature of everyday life in the racist state, the inevitable transmutation of a legal system based on racial distinctions into structural and individual exploitation and barbarity. It shows that it was this racist state, the core features of which had already been established before 1904, that endowed German colonial rule with its characteristic features, and that together with the genocide was responsible for its gravest after-effects. It corrects both the false image of German colonial rule as having been exercised benevolently before 1904, and that of a ‘peace of the graveyard’ (Drechsler) after the genocide.

Jürgen Zimmerer is professor of history at the University of Hamburg and president of the International Network of Genocide Scholars. Between 2005 and 2011 he served as senior editor of the Journal of Genocide Research and was from 2007 to 2011 founding director of the Sheffield Centre for the Study of Genocide and Mass Violence. His research interests include German colonialism, comparative genocide, colonialism and the Holocaust, critical prevention studies and environmental violence and genocide.

‘When people ask me if I’m a hero or a traitor, I say I’m just an ordinary person’ – Edward Snowden talks to Trevor Noah about his new book Permanent Record

‘Her car was on fire, and she was trapped inside’ – Read an excerpt from Kuli Roberts’s debut novel Siren