Confessions of a Stratcom Hitman by the late Paul Erasmus – a visceral confession to South Africans and a letter of love to his family
More about the book! 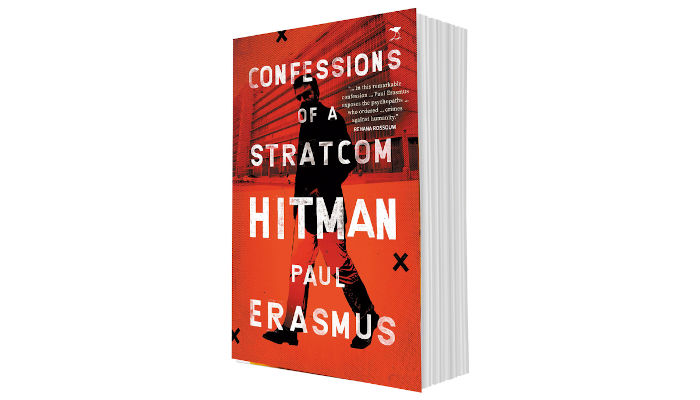 Confessions of a Stratcom Hitman by Paul Erasmus is out now from Jacana Media.

‘During apartheid, the security police hunted down, tortured and murdered political activists at the behest of the cabinet, government and judiciary. In this remarkable confession to his son, Paul Erasmus exposes the psychopaths, and the incompetents, who ordered and executed these grave crimes against humanity.’ – Rehana Rossouw

Paul Erasmus’s searing account of his time as a security policeman during apartheid is nothing short of explosive.

In this book, remarkable for its candour as for its effort at Erasmus’ attempt at coming to a reckoning with the atrocities he committed and was party to, we read of the National Party’s determination to destroy Winnie Mandela, to terrorise anti-apartheid activists, to smear and compromise people who did not accept the Volk en Vaderland way.

Erasmus lays bare the corruption and power mongering in the South African Police, and the fascist associations that some cops were linked to. He names names, but ultimately asks himself how he could have done what did. His testimony before the Truth and Reconciliation Commission was extensive, and allowed a view into the world of Stratcom. This book takes that testimony a step further.

At this time of fake news, of populism and misinformation, of privateers in the state security system and of state capture by the governing party, this book could not be more urgent or apt. It is a disturbing and furious attempt by Erasmus to explain his own depravity and that of his colleagues, bosses and governments operating under the Stratcom project. Erasmus frames this within the tyranny of the racist, banal and ideological state during apartheid. This book is a letter from history, a visceral confession to South Africans and a letter of love to his family.

‘Using the word as loosely as some South Africans do today, strips it of its intentional and intimate terror. […] The diluted use of the word today empties out the pain it was designed to cause. We in Stratcom wanted to annihilate, not only get the odd positive story into the papers to prop up De Klerk. We were trained to permanently neutralise, ideas or people or institutions, on behalf of the government of the day.

‘Stratcom then was nothing like the tame, badly behaved thing some South Africans – including the supporters of a couple of political parties – throw around on Twitter now. Those people who do that should read more and deeply come to terms with how it took Winnie apart on purpose, using unlimited state resources and money to do so.

‘It helped wreck her, just as it did many others.’