Calling all poets: Submissions are open for the 2018 Sol Plaatje EU Poetry Award and Anthology
More about the book! 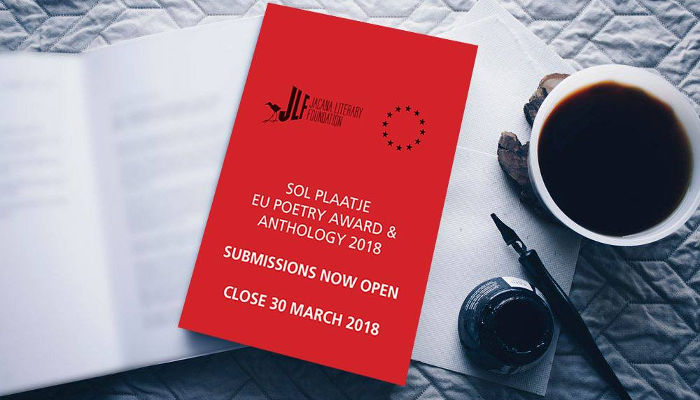 The Jacana Literary Foundation (JLF) is thrilled to announce that submissions for the eighth annual Sol Plaatje European Union Poetry Award and Anthology will be open from 9 to 30 March 2018! This award and anthology are made possible through ongoing support and partnership with the European Union.

Up to three poems in any of South Africa’s official languages can be submitted via the online entry form below. Entrants are encouraged to submit poems written in their mother tongue. Entries will close at 5 pm on Friday, 30 March 2018.

The work submitted is judged blind by a panel of four esteemed poets and a chair. As in previous years, a longlist of the best entries received will be published in volume 8 of the anthology. A shortlist of three poets is selected from the longlist, and those finalists will be invited to attend an event where the winner will be announced and cash prizes awarded.

Named after Solomon Tshekisho Plaatje (1876–1932), the Award recognises the life and vision of this highly respected political and social activist. We always hope that it reveals the political and social attitudes of our time, and reflects the complex, nuanced and uncomfortable truths of life in South Africa, and thus, poems which reflect our current realities are warmly welcomed.

Cash prizes are awarded to the shortlist:

By entering, the poet declares that the entry is their original work and neither whole nor part of their poem has been published previously. They give permission for the publication of their poem in the anthology, without payment, if longlisted. Poets agree to have their work translated into English for adjudication and publication purposes.