[Book excerpt] Find out why everyone is laughing (and crying) while reading The Funny Thing about Norman Foreman by Julietta Henderson
More about the book! 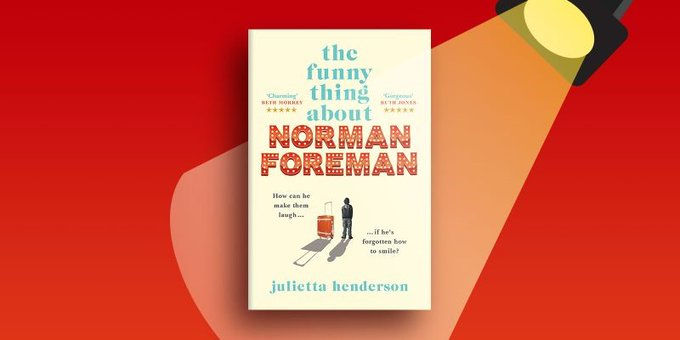 Penguin has shared an excerpt from The Funny Thing about Norman Foreman by Julietta Henderson. Scroll down to dip into the book!

What do you get when you cross a painfully awkward son, lofty comedic ambition and a dead best friend?

Norman and Jax were a legendary comedic duo in waiting. They had a plan to take them all the way to the Edinburgh Fringe in just 5 years’ time. But when Jax dies before they turn twelve, Norman decides a tribute act for his best friend just can’t wait… so he rewrites their plan:

1. Look after mum
2. Find Dad
3. Get to the Edinburgh Fringe

Sadie won’t win a mother of the year award anytime soon and not knowing exactly who her son’s father is isn’t topping her list of achievements. But if performing at the Fringe and finding his dad is what will help Norman through… they’re going to make it happen.

When I was born my insides lay outside my body for twenty-one days. Which is unexpected, but not nearly as unusual as you might think. For every 3,999 babies that come out with everything tucked in neatly and sealed away exactly where it should be, there’s one like me. Nobody really knows why. Luck of the draw, my father used to say.

For those three weeks, while I lay spreadeagled in an incubator like a Nando’s special, a crowd of doctors gathered every morning to discuss their cleverness and, as my organs shrank to their correct size, bit by bit they gently posted a little more of the me-parts that had made a break for it back inside.

Well, that’s the way my mother told it anyway. The way my father told it, the doctors gathered around the incubator every morning to discuss whether they’d be having my large intestine or my liver for their lunch, and whether it’d be with chips or salad. And that right there might tell you almost everything you need to know about my parents. On my insides’ final day of freedom the head surgeon pushed the last bit through the slit in my stomach and stitched it closed, presumably with everything in its rightful place. I was declared whole and sent home to begin life almost like nothing had ever happened.

Except that even when the regular hospital check-ups stopped and the scar on my stomach that I’d never lived without faded to a thin silver seam, I can always remember still feeling the tugging behind it. Something I could never quite name, nudging at the fleshy edges whenever things were going badly, or too well. Or just for fun. To remind me how easily those parts of me that never quite fitted could come sliding out. Any time we like, Sadie. Any time we like.

It wasn’t until I held my own son for the first time that the constant, dull pressure of keeping the scar together receded. When a nurse placed that slippery, crumpled-up bundle of boy on my chest, I tightened my grip on a handful of hospital sheet as my world creaked on its axis, bumped into a comfy spot and was finally facing the right way.

I didn’t feel the tug on the scar again until a different boy died, and to say I wasn’t ready for it isn’t even the most important thing. Because by then there was a whole lot more at stake than just my own stupid insides spilling out into the world. I was as scared as hell and I had no idea how to fix any of it. And that right there might tell you almost everything you need to know about me.

First rule of comedy: Timing is everything.

Timing is everything. First rule of comedy, Jax says. Because when push comes to shove, if you can get the timing right, you can get a laugh. He says. Well I don’t really know how to tell when push is coming to shove, but I’ll tell you something I do know. That rule works the other way too. Because when the you-know-what starts to hit the fan, if your timing’s wrong there’s pretty much zilcho you can do to stop it from splattering all over the place.

Stare straight ahead and think about nothing. That’s a world-famous Jax Fenton tactic for what to do when you get yourself into a bit of a mess. Works every time he reckons, and he should know. Only maybe it doesn’t. Because when I stare straight ahead all I can see is that big, shiny wooden box and instead of nothing I’m thinking about everything. And loads of it. Like does any light get in through the joins and did they let Jax wear his Frankie Boyle Tramadol Nights tour T-shirt. And does whoever put him in there know he only likes to sleep on his side.

The massive scab on my chest feels so tight that I’m scared to breathe too deep in case it splits down the middle and bleeds all over my new shirt. Stare straight ahead. I move just a bit so I almost can’t see the box behind a couple of heads, and my arm touches Mum’s. When I feel her, straight away the mess on my chest relaxes and lets me take half an almost good in-breath. Nearly a whole one. Right before it stabs me all the way through to my back and kazams like a rocket down to my toes. I’m pretty sure I can hear it laughing. Timing is everything, sucker.

And by the way, that’s another thing I know. That you can’t trust your timing, no matter how good it’s been in the past. Not even for people as excellently funny as Ronnie Barker or Dave Allen or Bob Mortimer. Or Jax. Because even if you nick a little bit of money for sweets every weekday morning from your mum’s purse, even if you accidentally-on-purpose leave your stepfather’s car door open so the cats get in and wee on the seats, and even if you’re the naughtiest kid in the whole school by a long shot, when you’re eleven years, 297 days and from what the paramedics can tell anything between twelve and sixteen hours old, it’s definitely not a good time to die.

Stare straight ahead and think about nothing.

Don’t miss the virtual book launch of Girl A by Abigail Dean, in conversation with Pippa Hudson (10 Mar)