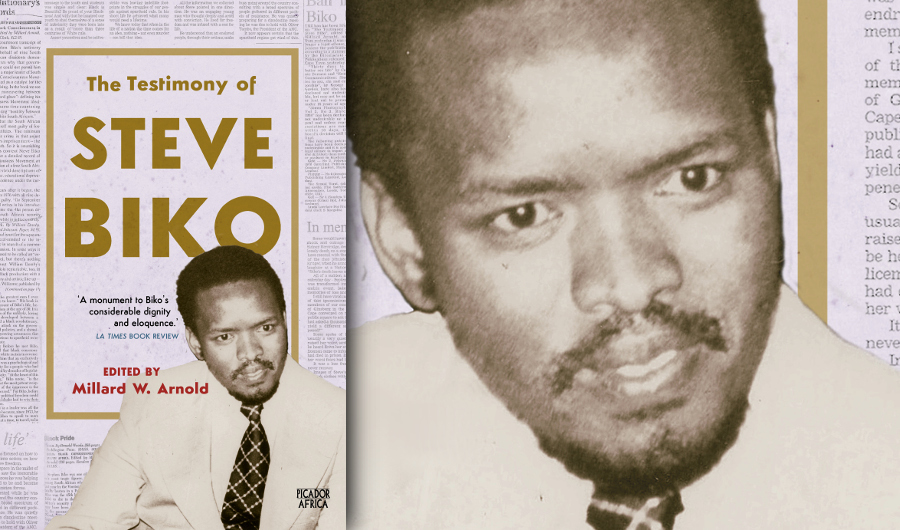 When Steve Biko entered the courtroom in Pretoria in 1974 as a star witness in the trial of nine student leaders, those who had heard of the myth of the man finally witnessed him speak.

The students were from the Black People’s Convention (BPC) and the South African Students’ Organisation (SASO), and were charged with what the state called ‘violent revolutionary change’.

In the four and a half days he was in court, Biko provided South Africa and the world and understanding of the philosophy of Black Consciousness. The trial occurred a little more than a month before the June 16th Uprising in Soweto, and Biko’s testimony was vital in inspiring the young students who were protesting Afrikaans as a medium of instruction.

The Testimony of Steve Biko focuses on his testimony, in his own words.

In the book, Thabo Ndabeni, a Soweto activist, recounts the extraordinary impact Steve had on him:

The trial added content to our emerging understanding of what Black Consciousness was. As we were reading newspapers, we were able to understand the genesis of Black Consciousness, understand the rationale why people did the things they did. It brought into focus the central role that Steve Biko played in the development and the spread across the country of Black Consciousness. While the trial was meant to be a warning against anybody who wanted to rise up against the state, it ensured the reverse impact. The interaction between Steve and the judge and Steve and the prosecution gave you a chance to see that he was very much superior in terms of intellect. In their court, Steve defeated white superiority. The trial, in a sense, was a liberating experience.

Biko was electrifying as a witness. As Dr Nthato Motlana, a long-standing activist in Soweto, recalls:

Steve was a young man who was so brave. If you look back to those days when many of us wouldn’t open our mouths and say the kind of things Steve said there, you’ll see a testimony to the courage and the inspiration he had. He must have inspired the whole generation of young people about the kind of things he stood for. And to say those things in public, he was wonderful.

Read an excerpt from The Testimony of Steve Biko – a conversation between David Soggot (italics), senior counsel for the defence, and Steve Biko:

When you have phrases such as ‘Black is Beautiful,’ now, would that sort of phrase fit in with the Black Consciousness approach? — Yes, it does.

What is the idea of such a slogan? — I think that slogan has been meant to serve and I think is serving a very important aspect of our attempt to get at humanity. You are challenging the very deep roots of the Black man’s belief about himself. When you say, ‘Black is Beautiful’ what in fact you are saying to him is: Man, you are okay as you are; begin to look upon yourself as a human being. Now, in African life especially it also has certain connotations, it is the connotation of the way women prepare themselves for viewing by society. In other words the way they dress, the way they make up and so on, which tends to be a negation of their true state and in a sense a running away from their colour. They use lightening creams, they use straightening devices for their hair and so on. They sort of believed, I think, that their natural state, which is a Black state, is not synonymous with beauty. And beauty can only be approximated by them if the skin is made as light as possible and the lips are made as red as possible, and their nails are made as pink as possible and so on. So in a sense the term ‘Black is Beautiful’ challenges exactly that belief which makes someone negate himself.

THE COURT: Mr Biko, why do you people then pick on the word black? I mean, black is really an innocent reference which has been arrived at over the years the same as white. Snow is regarded as white, and snow is regarded as the purest form of water and so it symbolises purity, so white there has got nothing to do with the White man? — Right.

Quite. [Laughter] But now, why do you not use the word brown, then? — No, I think really, historically, we have been defined as Black people, and when we reject the term Non-White and take upon ourselves the right to call ourselves what we think we are, we have got available in front of us a whole number of alternatives – starting from natives to Africans to Kaffirs to Bantu to Non-Whites and so on – and we choose this one precisely because we feel it is most accommodating …

MR SOGGOT: Is your concern so much the restructure of the word ‘black’ in the world of linguistics … as to alter the response of Black people to their own Blackness? — It is certainly directed at man, at the Black man.

And I think you were talking about your understanding of the Black man’s own sense of inferiority and self-hatred and all that? — Yes.

In the world of language, how does the Black man figure, how does he feel? — Yes, I think this is another area where experiences of … Well, let me say difficulties that I have experienced … We have a society here in South Africa which recognises in the main two languages, English and Afrikaans as official languages. These are languages that you have to use at school – at university, I mean – or in pursuit of any discipline when you are studying as a Black man. Unfortunately the books you read are in English. English is a second language to you. You have probably been taught in a vernacular, especially during these days of Bantu education up to Standard 6. You grapple with the language to J.C. and matric, and before you conquer it you must apply it now to learn disciplines at university. As a result you never quite catch everything that is in a book, you certainly understand the paragraph … I mean, I am talking about the average man now, I am not talking about exceptional cases … You understand the paragraph but you are not quite adept at reproducing an argument that was in a particular book, precisely because of your failure to understand certain words in the book. This makes you less articulate as a Black man generally, and this makes you more inward looking. You feel things rather than say them. And this applies to Afrikaans as well – much more to English than to Afrikaans. Afrikaans is essentially a language that has developed here, and I think in many instances it is idiom, it relates much better to African languages, but English is completely foreign, and therefore people find it difficult to move beyond a certain point in their comprehension of the language.

And how does this relate to the Black man or in particular to the Black students as inferiority? — An example of this for instance was again during the old days of NUSAS where [White] students would be something that you as a Black man experienced in your day-to-day life, but your powers of articulation are not as good as theirs. Also you have amongst the White students a number of students doing M.A., doing Honours – you know, in particular quarters – highly articulate, very intelligent. You may be intelligent but not as articulate. You are forced into a subservient role of having to say yes to what they are saying, talking about what you have experienced, which they have not experienced, because you cannot express it so well: This in a sense inculcates also in numerous students a sense of inadequacy. You tend to think that it is not just a matter of language. You tend to tie it up also with intelligence in a sense. You tend to feel that that guy is
better equipped than you mentally.

THE COURT: But why do you say that? Isn’t English the official language of SASO? — Yes, it is.

Well, now. Your complaint is against the language, but it is just the very language that you are using? — No, no, I am not complaining against the language. I am merely explaining how language can help – in the development of an inferiority complex. I am not complaining against the language. The point in issue is that we have something like ten languages. We cannot speak all ten languages at one meeting; we have got to choose a common language. But unfortunately in the learning process this is really what happens. You do not grasp enough and therefore you cannot be articulate enough, and when you play side by side with people who are more articulate than you, you tend to think that it is because they are more intelligent than you, that they can say these things better than you.

MR SOGGOT: But your point as I understand it is that the Black man feels a little bit of a foreigner in the linguistic field? — Right …