Pan Macmillan South Africa is publishing three books this year to honour the life and work of Steve Biko.

The legendary anti-apartheid activist and leader of the Black Consciousness movement died in detention at just 30 years old in 1977, 40 years ago this September. 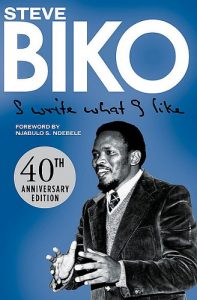 The first, a 40th anniversary edition of I Write What I Like, was published in June, and features a new Foreword by Njabulo S Ndebele, personal reflections on Steve Biko and Black Consciousness, as well as Biko’s first known published piece of writing.

In addition, it features all the material of the original Picador Africa edition: a collection of Biko’s columns entitled I Write What I Like published in the journal of the South Africa Student Organisation under the pseudonym of ‘Frank Talk’; other journal articles, interviews and letters written by Biko at the time; an Introduction by Nkosinathi Biko; a preface by Archbishop Desmond Tutu; and a moving memoir by Father Aelred Stubbs. 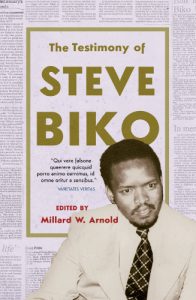 The Testimony of Steve Biko

When Steve Biko entered the courtroom in Pretoria in 1974 as a star witness in the trial of nine student leaders from the Black People’s Convention (BPC) and the South African Students’ Organisation (SASO), those who had heard of the myth of the man finally got to witness him speak.

Biko’s testimony gave traction and newfound understanding to the teachings of Black Consciousness. This book focuses on his testimony, in his own words. 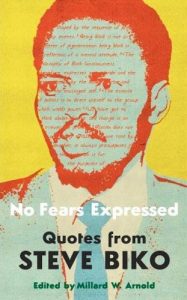 Originally published in June 2007, this book aims to keep intact the soul of Steve Biko and his teachings in a book of quotes.

No Fears Expressed brings Biko’s revolutionary thought to life on a wide range of subjects:

‘The future will always be shaped by the sequence of present-day events.’

‘The philosophy of Black Consciousness, therefore, expresses group pride and the determination by the blacks to rise and attain the envisaged self.’