A Path Unexpected – a memoir about family, love, loss, finding purpose and dedicating oneself to a life of service
More about the book! 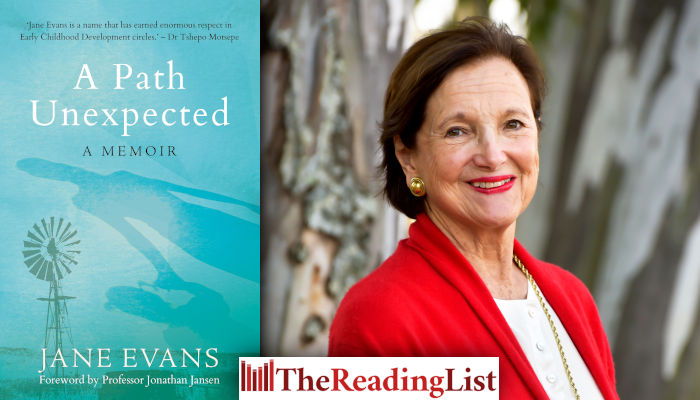 A Path Unexpected: A Memoir by Jane Evans is out now from Jonathan Ball Publishers.

‘Jane Evans is a name that has earned enormous respect in Early Childhood Development circles. The fact that ECD is an essential pillar in our country’s programme of educational reform owes much to Jane and other activists of the time – many of whom are mentioned in her book. While this is a personal memoir it is also an important record of ECD in South Africa.’
– Dr Tshepo Motsepe

On the eve of the Soweto uprisings of June 1976, a young woman leaves her home city of Johannesburg, her busy life, and her promising career as a journalist and women’s page editor on South Africa’s biggest morning newspaper.

She had just married a prosperous farmer and is about to begin a new life in what is to her a strange new world, a sprawling cattle and maize farm in the Free State, far from the city and the adrenaline bustle that has driven her work-filled days and nights.

She feels out of place and out of her depth and struggles to adapt to the everyday expectations of her new role as a farmer’s wife. Her unease is compounded by the entrenched discrimination she sees in the nearby small town of Viljoenskroon.

It is the era of Grand Apartheid. The system and the nation are about to be shaken to their core by the events of June 16 as police open fire on schoolchildren protesting against the imposition of Afrikaans as a principal medium of instruction.

For Jane Evans, her wedding ring still shiny and new on her finger, the crackle of the news on the farmhouse radio only intensified her own feeling of upheaval.

The day after the Soweto uprising her husband Anthony asks if she’ll go with him to the primary school. The school was built on the farm by Anthony’s father for the children of the farmworkers and is situated in the ‘stat’ or farm village where the farmworkers live. It accommodates 300 children from their home farm Huntersvlei and neighbouring farms.

There, Jane is struck once again by the number of little children playing either in the dirt, pushing tyres on the dusty roads or kicking balls. They don’t seem unhappy but there is no structured learning for nursery school-aged children on this, or as it turned out, any other farm in the province and pretty much the country. In Jane’s mind, there should have been. An idea was born, a niggling feeling became the epicentre of her quest for meaning and purpose as she joined forces with women who worked the land to build a better way of preparing their young pre-school aged children for the challenges of future learning.

From these small beginnings, a new era in early childhood development (ECD) was born on South African farms. The farm nursery school became the founding, pioneering initiative which led to the birth of a non-government, not-for-profit organisation called ‘Ntataise’ meaning ‘to lead a young child by the hand’, and it has grown over the years to bring hope and change to thousands of rural women and over 800 000 to a million children.

Eloquently written and told with great sensitivity and humility, A Path Unexpected is a memoir about love, loss, finding purpose, and how one woman’s unexpected path led to family-like bonds in the unlikeliest of places – and about a dream so profound that it would influence generations of young learners and the women who teach them.

Jane Evans has held positions on a number of ECD government bodies, as well as serving as a trustee on a number of trusts. These include the Helen Suzman Foundation, the St Anne’s School board of governors, PAST and the Lee Berger Foundation for Exploration Trust.

Jane has a particular interest in palaeoanthropology. She has received a number of awards, including ‘Woman of the Year’ awarded by the Star newspaper, The Johannesburg College of Education’s Rectors Gold medal ‘for exceptional contribution to education in South Africa’, and the Chancellors Medal awarded by the University of Pretoria.