A human skeleton, a terrifying local feud, an angry river spirit – A Deadly Covenant by Michael Stanley is out now!
More about the book! 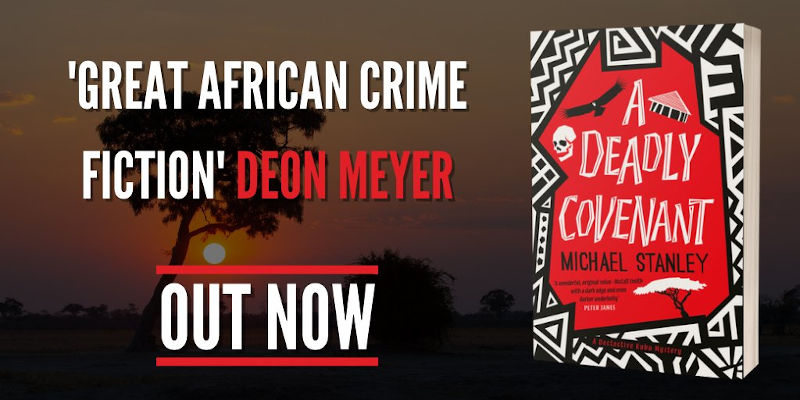 A Deadly Covenant by Michael Stanley is out now from Jonathan Ball Publishers!

When a human skeleton is discovered at the site of a controversial new dam in remote northern Botswana, rookie Detective Kubu is drawn into a terrifying local feud, and discovers a deadly covenant that could change everything …

While building a pipeline near the Okavango Delta, a contractor unearths the remains of a long-dead Bushman. Rookie Detective David ‘Kubu’ Bengu of Botswana CID and Scottish pathologist, Ian MacGregor, are sent to investigate, and MacGregor discovers the skeletons of eight more men.

Shortly after the gruesome discoveries, the elder of a nearby village is murdered in his home. The local police are convinced it was a robbery, but Kubu isn’t so sure … and neither is the strange woman who claims that an angry river spirit caused the elder’s death.

As accusations of corruption are levelled and international outrage builds over the massacre of the Bushman families, Kubu and his colleagues uncover a deadly covenant, and begin to fear that their own lives may be in mortal danger …

Michael Stanley is the writing team of Michael Sears and Stanley Trollip. Both were born in South Africa and have worked in academia and business. Stanley was an educational psychologist, specialising in the application of computers to teaching and learning, and is a pilot. Michael specialises in image processing and remote sensing, and teaches at Wits University. On a flying trip to Botswana, they watched a pack of hyenas hunt, kill and devour a wildebeest, eating both flesh and bones. That gave them the premise for their first mystery, A Carrion Death, which introduced Detective ‘Kubu’ Bengu of the Botswana Criminal Investigation Department. It was a finalist for five awards, including the Crime Writers’ Association Debut Dagger. The series has been critically acclaimed, and their third book, Death of the Mantis, won the Barry Award for Best Paperback Original mystery and was a finalist for an Edgar award. Deadly Harvest was a finalist for an International Thriller Writers’ award. A Death in the Family and Dying to Live are the latest in the Detective Kubu series, published in 2017 by Orenda Books. Dead of Night the standalone thriller, was published in 2018.