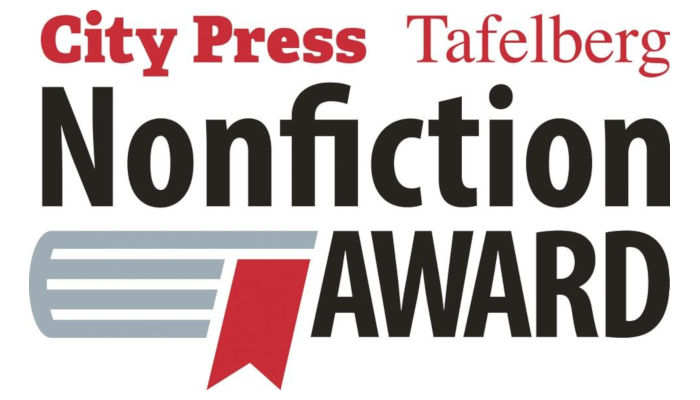 The five finalists for the prestigious City Press Tafelberg Nonfiction Award have been revealed!

The biennial prize is awarded to a new or established writer who has already begun research into their selected field and hopes to secure a publishing contract with NB Publishers, as well as R120,000 to develop their book.

The award encourages work ‘across all aspects of nonfiction that offers relevance to the South African landscape’.

With the award, City Press and NB Publishers seek to encourage the tradition of nonfiction that interprets and portrays South African realities in an illuminating and thought-provoking way. The aim is to fund the research and writing of an original work of nonfiction that breaks new ground on a subject of importance in the South African context, irrespective of genre. The award is for English manuscripts only.

Previous winners of the City Press Tafelberg Nonfiction Award include Democracy and Delusion by Sizwe Mpofu-Walsh, Gang Town by Don Pinnock and Postmortem: The Doctor Who Walked Away by Maria Phalime.

More than 120 submissions were received this year. The five finalists are:

More about the manuscripts:

Mental illness was again highlighted this week when news broke that hip-hop star HHP, who had spoken publicly about his battle with depression, committed suicide. In Patient 12A, Molefi chronicles his time spent in a mental health clinic in Johannesburg in 2016. Molefi candidly writes about the challenges he faced at the clinic every day, and relates stories from fellow patients. Attempting to shed light on mental illness within the black community, his memoir will also look at how young adults experience the work environment.

Molefi is a writer and videographer, and has covered topics related to current affairs and pop culture. His independent work includes the online documentary Reconnecting Pangea.

Harry Kalmer – Requiem for a Joller

Requiem for a Joller traces the life story of anti-apartheid activist Marius Schoon, who was jailed for 12 years for sabotage in the 1960s and lived in exile after his release. In 1984, his wife and their six-year-old daughter were killed by a letter bomb sent by an apartheid security police spy. Kalmer uses Schoon’s personal archive to outline his life.

Kalmer, who wrote A Thousand Tales of Johannesburg, already has a foot in the literary world and was particularly moved to tell Schoon’s story.

Former Cape Times editor and author Tyrone August proposed an autobiography of poet and political activist Dennis Brutus, who was banned by the National Party government in 1962. Through the SA Non-Racial Olympic Committee, he led a campaign against South Africa being allowed to take part in the 1964 Olympics. August will take a biographical look at the first four decades of Brutus’s life.

Brutus, who served 18 months on Robben Island, released his first collection of poems while he was imprisoned in 1963. ‘While there is some autobiographical work available on Brutus, this material appears in different titles and is not written up into a single narrative,’ August says. ‘My biography will be the first attempt to construct a continuous narrative of his early life in South Africa.’

In this memoir, Nandipha Gantsho draws on her life as a black teacher in a predominantly Indian school during post-apartheid South Africa. Gantsho explores issues of identity, race and how the educational landscape has developed since the end of apartheid. She will offer insight into the transitional period, between 1995 and 1999, and the aftermath of the state of education in the country.

Gantsho has more than 20 years of experience as an English teacher and is currently a lecturer at the University of Mpumalanga. She has a master’s degree in applied English language from Wits University.

Sara Black – At the Chalk-face

This submission also revolves around the field of education. In At the Chalk-face, Sara Black takes a more analytical approach to her time spent as a maths teacher. Black will illustrate why she believes the current system is failing so many of its teachers, and how the pressures of the educational system eventually saw her leave her position as head of the maths department once she had reached her limit.

The themes she will tackle in the book include literacy issues, special education needs, departmental pressures and the multiple challenges that students face every day. As an education researcher based at the University of Cape Town, she recently began her PhD in sociology of education.

Don’t miss an evening with Prue Leith in Cape Town (PLUS a cooking demonstration!) (5 Feb)

Join Hassen Ebrahim for the launch of his memoir Marabastad to Mogadishu: The Journey of an ANC Soldier at Love Books (29 Jan)

Win a hamper of nature books