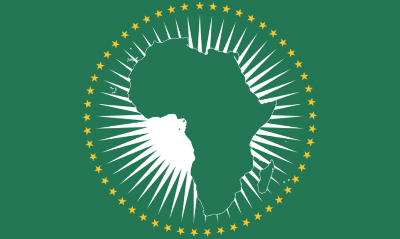 To celebrate Africa Day, read what a selection of writers had to say about the continent, and about writing on the continent.

Literature should be taken to the street. That is where, in Africa, it must be. The path of literature is the assured way to human salvation and to civilisation. I hail the power of the pen. 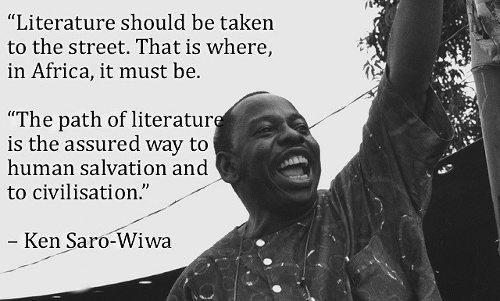 An additional difficulty for the creative artist in South Africa, especially for the black writer, is that life itself is too fantastic to be outstripped by the creative imagination.

Literature in English is still dominated by writers who come from a monolingual background. So I’m excited about the possibility of using English as it’s spoken by people who move easily from one tongue to another – from one way of being to another. Put it this way: I’m more and more disinterested in writing in the kind of English that cannot cope outside its clime.

In Nigeria there’s a tradition of people telling stories to pass the time but also to celebrate life. In very small towns like the one where I grew up, people would sit down in the evening and tell each other stories, and it didn’t matter if the story you were telling was one that everyone knew. What you have to do is improvise around it; you reinvent it.

In Africa, language is not something we just use to communicate. You have to decorate it; the language has to be rich. 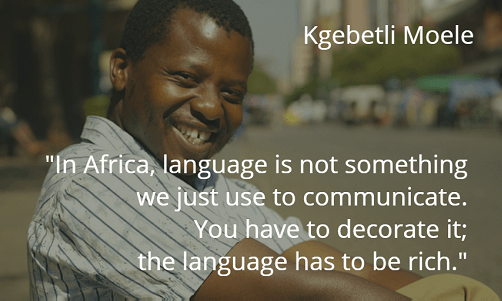 Stories are our friends, our counsellors and our teachers. They are a means of nurturing a moral culture in the hearts and minds of people. They stir the imagination, they bring together people and they break down barriers. It is a tradition we must never lose in the rush to the cities.

It is the story that saves our progeny from blundering like blind beggars into the spikes of the cactus fence. The story is our escort; without it, we are blind. Does the blind man own his escort? No, neither do we own the story; rather it is the story that owns us and directs us. It is the thing that makes us different from cattle; it is the mark on the face that sets one people apart from their neighbours.

Things happen, people tell stories about them. Then – life passes quickly – the events and stories are faintly remembered or totally forgotten. But in the black communities of South Africa perhaps we remember our stories for a little longer than other people do. After all, for so many years now, we have owned our stories while owning so little else. 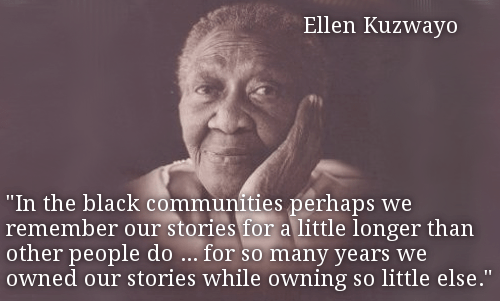 I’m such a believer in stories and how powerful stories are. Because stories are human and they draw you in; they’re not abstract arguments. In some ways it’s a safer space, so people who don’t necessarily agree with me politically can still get into that story.

We may speak English at the free market bazaar, but our moral choices and the trials of our daily existence – birth, death, worship, celebration and so on – are locked up in our mother tongues.