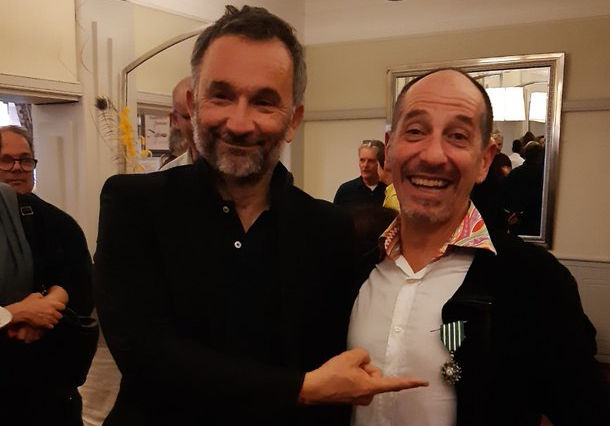 Header image: Branko Brkic and Zapiro, from Zapiro on Twitter

Zapiro was presented with the Chevalier des Arts et des Lettres (Knight in the Order of Arts and Letters) at a ceremony in Cape Town on 13 November 2019.

The award recognises ‘significant contributions to the enrichment of the arts and literature in France and abroad’.

The Daily Maverick reported on the event:

Zapiro was bestowed the order because he shares ‘the values that define and guide [the French] Republic: the trilogy, equality, liberty and fraternity, resonate perfectly with who you are, what you believe in and what you stand for’, explained Lechevallier.

Watch a video of the presentation:

.@lechevallierAS: "Everywhere in the world, we are looking for the shape of truth. And from time to time, in the silence of a closed room, in the mystery of an inspired mind, a gifted-woman or a gifted-man decides that the shape of truth should be… a cartoon." @zapiro pic.twitter.com/8I6Nju5fqo