You Will Be Safe Here – the debut novel from award-winning non-fiction author Damian Barr
More about the book! 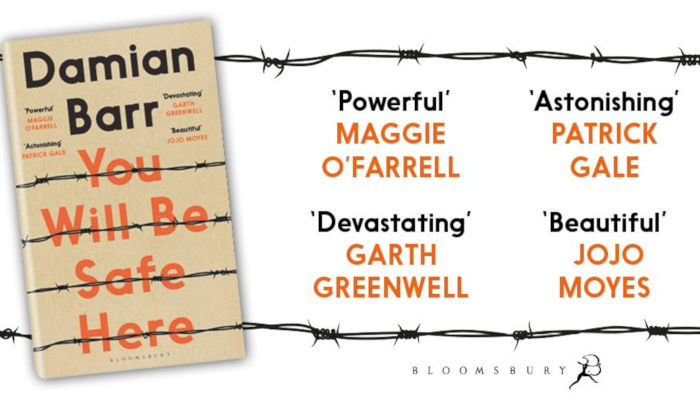 You Will Be Safe Here by Damian Barr is out now from Jonathan Ball Publishers.

This is the brilliant debut novel from the award-winning author of the memoir Maggie & Me.

You Will Be Safe Here is an Observer, Financial Times and Guardian Pick for 2019.

South Africa, 1901, the height of the second Boer War. Sarah van der Watt and her son are taken from their farm by force to Bloemfontein Concentration Camp where, the English promise: they will be safe.

Johannesburg, 2010. 16-year-old outsider Willem just wants to be left alone with his books and his dog. Worried he’s not turning out right, his ma and her boyfriend send him to New Dawn Safari Training Camp. Here they ‘make men out of boys’. Guaranteed.

You Will Be Safe Here is a deeply moving novel of connected parts. Inspired by real events, it uncovers a hidden colonial history and present-day darkness while exploring our capacity for cruelty and kindness.

Damian Barr is an award-winning writer and columnist. Maggie & Me, his memoir about coming of age and coming out in Thatcher’s Britain, was a BBC Radio 4 Book of the Week and Sunday Times Memoir of the Year, and won the Paddy Power Political Books ‘Satire’ Award and Stonewall Writer of the Year Award. Damian writes columns for the Big Issue and High Life and often appears on BBC Radio 4. He is creator and host of his own Literary Salon that premieres work from established and emerging writers. You Will Be Safe Here is his debut novel. Damian Barr lives in Brighton.