You can’t escape this ride from hell! Watch the book trailer for Zola, the debut novel by Johan Jack Smith
More about the book! 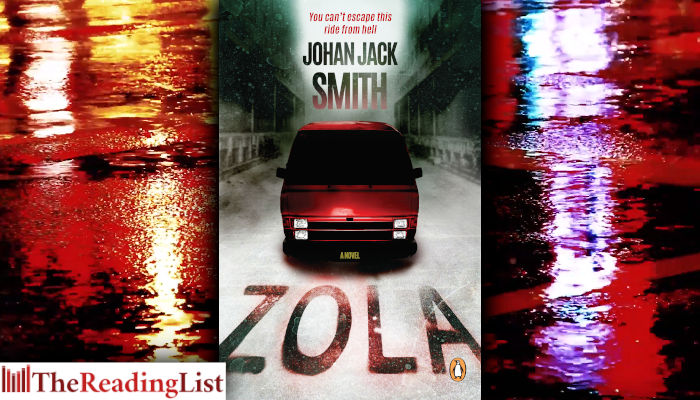 Zola: A Novel by Johan Jack Smith is out now in English and Afrikaans from Penguin Random House.

‘When does a city become more than glass and concrete, more than the Brutalist towers that remind us of our European ancestors? When does it become a potter that creates with blood and flesh and shit, till he creates an imperfect creation that thumps and cuts and deforms, just like his creator. Where we have to pick up the pieces in this trail of blood, and where we put them down, kneeling in front of their loved ones, begging them to forgive us. The creator and his creation have become one, and spat on everything that was once pure.’

‘Calvin Mpete. Drug boss with his claws dug into his sister. Majola wishes he could see his face. He needs to look into his eyes. So many rumours surround him. Bad ones: intimidation, abduction, murder. He’s been running the drug game in Alex since forever.’

A cryptic killer is cruising the streets of Johannesburg. He’s picking up young women to torture and mutilate, and it’s down to Captain David Majola and Warrant Officer Jason Basson to follow the trail of blood and find him.

Majola, plagued by cocaine and lost love, feels the need to prove himself after his early promotion; his partner Basson, imprinted by the bad old days, wishes he’d walked out on the SAPS years ago.

Tensions between the two rise as the bodies pile up, and while newspapers and politicians hurl accusations and the taxi bosses threaten a devastating strike, Majola and Basson must face the demons of a crazy city.

Johan Jack Smith grew up in Virginia in the Free State. He studied graphic art and design before embarking on a career in journalism. He writes reviews and columns, acts in plays and is a member of a literary performance group. His writing has appeared in Op die spoor van (2017) and Nuwe Stemme 6 (2017). Currently the editor of Taalgenoot, ATKV’s corporate magazine, Johan lives in Johannesburg with his wife and son.