What went so badly wrong with land restitution? A new book investigates
More about the book! 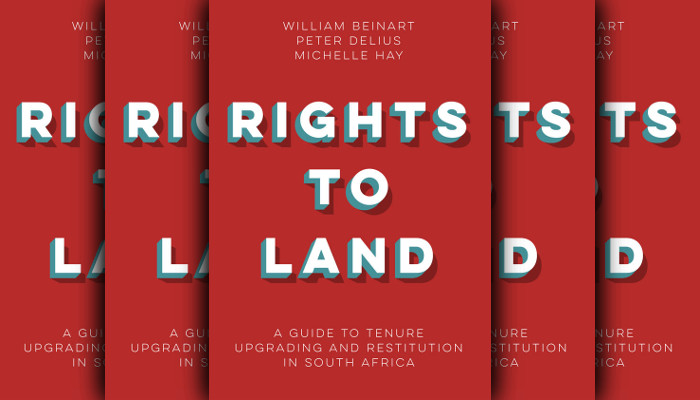 A new book titled Rights to Land: A Guide to Tenure Upgrading and Restitution in South Africa, by William Beinart, Peter Delius and Michelle Hay, is out now from Jacana Media and Good Governance Africa.

At present the rights of millions of South Africans who hold land in the former homelands, in informal settlements and on transferred land are uncertain.

The 1996 Constitution seemed to promise enhancement and upgrading of tenure, but this has not been effectively done. Those affected are among the poorest and it is important that their rights are not shouldered aside. For such families, their land rights are a major asset that should be clearly recognised.

Under President Jacob Zuma, however, rural policy seems to be heading in a traditionalist direction, placing control over land in the hands of chiefs and further undermining the already insecure land rights of ordinary people. Chiefs, entrenched under apartheid, have presided over an economic decline in the former Bantustans.

Beinart, Delius and Hay argue for a move away from communalist and traditionalist policies and for a focus on cementing individual and family land rights. They propose that all South Africans should hold their land in systems that are as secure as ownership and suggest a three-pronged approach: effective implementation of the Interim Protection of Informal Land Rights Act (1996) and similar legislation; clear definition by the courts of the strength of family and individual rights to customary and informal landholdings; and amended legislation to upgrade existing holdings.

Land restitution, initiated in 1994, was an important response to the injustices of the apartheid era. But it was intended as a limited and short-term process – initially to be completed in five years. It may continue for decades, creating uncertainty and undermining investment into agriculture.

The authors provide an analysis of what went so badly wrong, and warn that a new phase of restitution may ignite conflicting ethnic claims and facilitate elite capture of land and rural resources. While there are no quick fixes, the first phase of restitution should be completed and the policy then curtailed. Land reform urgently needs to prioritise employment creation, production and economic growth.

Love reading fiction? Enter this competition to WIN a 10-book hamper worth R2000!