Voices from the Underground – 18 members of Umkhonto we Sizwe’s Ashley Kriel Detachment tell their stories for the first time
More about the book! 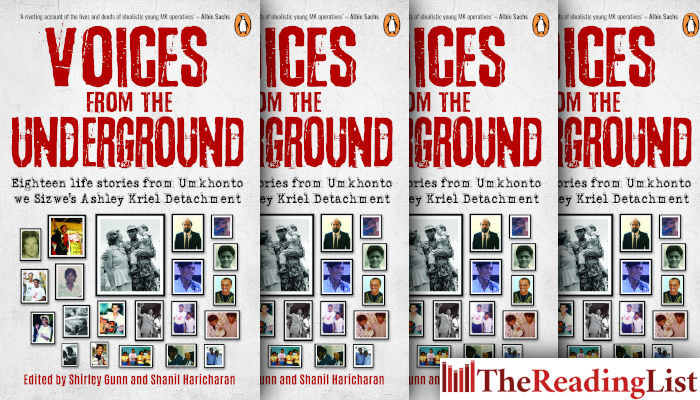 Voices from the Underground: Eighteen Life Stories from Umkhonto we Sizwe’s Ashley Kriel Detachment, edited by Shirley Gunn and Shanil Haricharan is out now from Penguin Random House SA.

What was it like to be a freedom fighter in the 1980s?

Eighteen members of the ANC’s military underground tell their stories, describing their backgrounds, their roles in the armed struggle and their lives since the fall of apartheid.

In 1987, the apartheid minister of law and order boasted that the security forces had crushed Umkhonto we Sizwe in the Western Cape. He could not have been more wrong. The Ashley Kriel Detachment, named after one of their slain comrades, conducted over thirty operations between late 1987 and early 1990, playing a crucial role in the defeat of an unjust system.

In Voices from the Underground, eighteen members of the AKD give accounts of their involvement in the armed struggle. The book traces their varying journeys into MK, via student activism, trade unions, religious organisations and UDF politics. It details their training in Angola, Botswana, Tanzania, Cuba and South Africa, and their experiences of detention and interrogation. Members recall the stresses of couriering arms and explosives across police roadblocks, hiding in safe houses and evading capture.

They talk about the operations they executed, the measures they took to avoid civilian casualties, and their responses to security breaches and the deaths of comrades in the line of duty.

Above all, this is a book about people, showing the effects of apartheid on their lives, their reasons for joining the armed struggle, the challenges of surviving in the underground while raising children, and their experiences of returning to civilian life or, in some cases, integrating into the SANDF.

Voices from the Underground gives a human face to ordinary people who took up arms to fight a violent state for the freedom of all South Africans.

Shirley Gunn is a former anti-apartheid activist, MK member and commander of the Ashley Kriel Detachment. She is the director of the Human Rights Media Centre, which promotes awareness and activism through narrative history projects. As a defender for the rights of victims of apartheid-related human rights violations, she assists in post-conflict, transitional justice processes internationally.

Shanil Haricharan is a former unit commander of the Ashley Kriel Detachment. Over the past 25 years, he has served as a senior official and public management advisor in the South African public service, and is also an adjunct senior lecturer at the University of Cape Town’s Nelson Mandela School of Public Governance.