VIP intrigue at Decameron – Read an excerpt from Fortunes: The Rise and Rise of Afrikaner Tycoons by Ebbe Dommisse
More about the book! 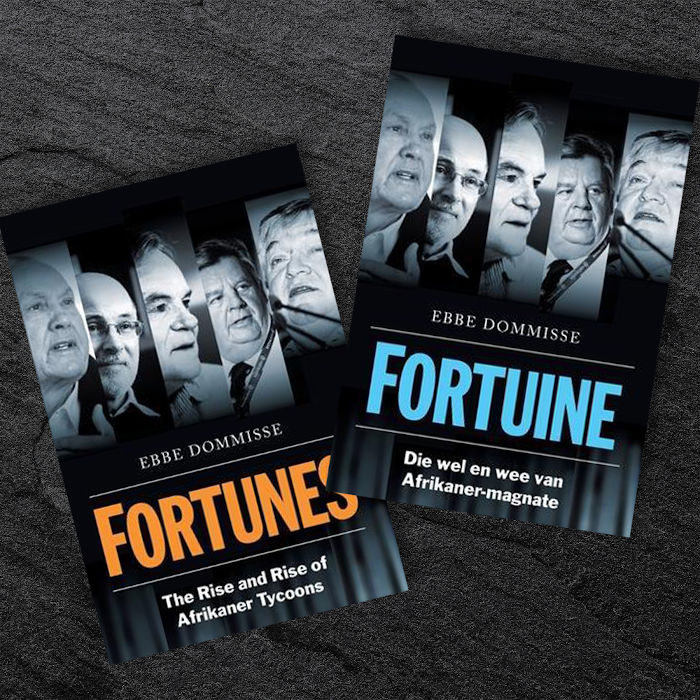 The restaurant Decameron in the centre of Stellenbosch remains a popular meeting place for some of the country’s top businessmen.

It was also the scene of a squabble between a group of these businessmen, that included Markus Jooste, and a local interest group, writes Ebbe Dommisse in Fortunes.

A popular meeting place of the Stellenbosch business elite is the town’s golf course, said to be the only golf club in the country where more wine than beer is consumed.

Another regular hangout for many of them is Decameron, the Italian restaurant in the town centre where Mario Ladu’s menu has become legendary. Lunches can at times run into the late afternoon when the table talk is engrossing. Mario makes sure that a table is available for his regular customers, just as for years he reserved a corner table for Anton Rupert when he did not eat at the Volkskombuis.

A Friday lunch at Decameron happened to be the prelude to a narrow escape one of Stellenbosch’s most prominent women, Erna Meaker, had with Steinhoff shares. On that day, she and her husband Paul were enjoying a meal in the smoke-free section of the restaurant when they smelled smoke. Paul got up to investigate and saw Markus Jooste chatting to people with a cigarette in his hand. The staff were loath to take action against the VIP guest, but Erna was outraged.

She decided on the spot that she did not want to own shares of something owned by someone who showed so little regard for other restaurant-goers. The following Monday she instructed her broker to sell all Steinhoff shares in her and her children’s trusts. A few days later, Steinhoff collapsed.

One of the important business decisions taken in Decameron concerned the merger of the liquor companies Distillers and Stellenbosch Farmers’ Winery. The new company needed a new name. A team of experts tasked with the job eventually agreed on Distell, a combination of the two names. The proposal was submitted to Anton Rupert, who was not very happy with it. Rupert, widely regarded as the oracle of trademarks, wanted to see something of the history of the wine industry reflected in the new name.

The team then returned on a Friday with the name Van Rijn, derived from the Van Ryn Wine and Brandy Company, one of the building blocks of Distillers. Delighted with this name, Rupert said he would talk to his tobacco colleagues to arrange that the tobacco brand Rembrandt van Rįjn would in future be known simply as Rembrandt. The following Sunday, while the Rupert family were assembled for lunch at Decameron, the proposed new name was among the topics they discussed. Huberte Rupert, who regularly acted as her husband’s sounding board, objected strongly: ‘But Van Rijn is tobacco!’

Early on Monday morning, Johann Rupert notified the team: ‘Van Rijn is out.’ Rupert senior eventually gave his approval that they could proceed with Distell.

The Decameron building was also the scene of a conflict between the Stellenbosch businesspeople that kept tongues wagging for months. It happened when plans were submitted for alterations to the four-storey building in which the restaurant is situated in Plein Street in the town centre – strategically close to the offices of a number of the businesspeople. There were half a dozen investors in the building, including Jannie Mouton and GT Ferreira, but along with the restaurant owner Mario Ladu they did not feature prominently in the disputes.

The group of developers met with opposition after the announcement of the building plans that, among other things, made provision for five storeys and included a penthouse for Markus Jooste. The resistance was spearheaded by the Stellenbosch Interest Group, led by three women who were opposed to the envisaged development on aesthetic grounds, inter alia because height restrictions were exceeded. The Interest Group received support from the side of the Ruperts, particularly from the Rupert Historical Homes Foundation and Historical Homes of South Africa.

The battle ended up in court, and later in the Appeal Court. Some Stellenbosch residents recounted gleefully that Johann Rupert once bumped into Jannie Mouton and admonished him about the dispute: ‘Jannie, if you want to play cat and mouse, you have to ensure you’re the cat.’ Mouton withdrew from meetings with the group of developers after talks with Anton Rupert, but did not his relinquish his investment or his lunch-time seat in the Decameron restaurant.

After months-long delays with court cases and a struggle to get the plans approved by the municipality, some of the smaller investors started feeling the pinch. Then GT Ferreira, who more than once had been the peacemaker in Stellenbosch, contacted the Rupert camp again to mediate after earlier attempts had failed. Finally, in February 2008, a settlement in which the municipality was involved was reached between the warring parties. New plans that conformed to the requirements for the town’s historic core were approved. The building was limited to four storeys, and Markus Jooste lost his penthouse in the process.