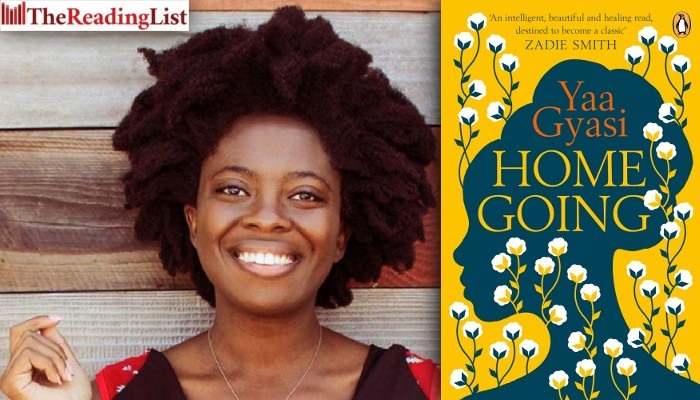 Effia and Esi: two sisters with two very different destinies. One sold into slavery; one a slave trader’s wife. The consequences of their fate reverberate through the generations that follow.

Taking us from the Gold Coast of Africa to the cotton-picking plantations of Mississippi; from the missionary schools of Ghana to the dive bars of Harlem, spanning three continents and seven generations, Gyasi has written a miraculous novel.

The night Effia Otcher was born into the musky heat of Fanteland, a fire raged through the woods just outside her father’s compound. It moved quickly, tearing a path for days. It lived off the air; it slept in caves and hid in trees; it burned, up and through, unconcerned with what wreckage it left behind, until it reached an Asante village. There, it disappeared, becoming one with the night.

Effia’s father, Cobbe Otcher, left his first wife, Baaba, with the new baby so that he might survey the damage to his yams, that most precious crop known far and wide to sustain families. Cobbe had lost seven yams, and he felt each loss as a blow to his own family. He knew then that the memory of the fire that burned then fled would haunt him, his children, and his children’s children for as long as the line continued. When he came back into Baaba’s hut to find Effia, the child of the night’s fire, shrieking into the air, he looked at his wife and said, “We will never again speak of what happened today.”

The villagers began to say that the baby was born of the fire, that this was the reason Baaba had no milk. Effia was nursed by Cobbe’s second wife, who had just given birth to a son three months before. Effia would not latch on, and when she did her sharp gums would tear at the flesh around the woman’s nipples until she became afraid to feed the baby. Because of this, Effia grew thinner, skin on small birdlike bones, with a large black hole of a mouth that expelled a hungry cry which could be heard throughout the village, even on the days Baaba did her best to smother it, covering the baby’s lips with the rough palm of her left hand.

At night, Baaba dreamed of leaving the baby in the dark forest so that the god Nyame could do with her as he pleased.

Effia grew older. The summer after her third birthday, Baaba had her first son. The boy’s name was Fiifi, and he was so fat that sometimes, when Baaba wasn’t looking, Effia would roll him along the ground like a ball. The first day that Baaba let Effia hold him, she accidentally dropped him. The baby bounced on his buttocks, landed on his stomach, and looked up at everyone in the room, confused as to whether or not he should cry. He decided against it, but Baaba, who had been stirring banku, lifted her stirring stick and beat Effia across her bare back. Each time the stick lifted off the girl’s body, it would leave behind hot, sticky pieces of banku that burned into her flesh. By the time Baaba had finished, Effia was covered with sores, screaming and crying. From the floor, rolling this way and that on his belly, Fiifi looked at Effia with his saucer eyes but made no noise.

Cobbe came home to find his other wives attending to Effia’s wounds and understood immediately what had happened. He and Baaba fought well into the night. Effia could hear them through the thin walls of the hut where she lay on the floor, drifting in and out of a feverish sleep. In her dream, Cobbe was a lion and Baaba was a tree. The lion plucked the tree from the ground where it stood and slammed it back down. The tree stretched its branches in protest, and the lion ripped them off, one by one. The tree, horizontal, began to cry red ants that traveled down the thin cracks between its bark. The ants pooled on the soft earth around the top of the tree trunk.

And so the cycle began. Baaba beat Effia. Cobbe beat Baaba. By the time Effia had reached age ten, she could recite a history of the scars on her body. The summer of 1764, when Baaba broke yams across her back. The spring of 1767, when Baaba bashed her left foot with a rock, breaking her big toe so that it now always pointed away from the other toes. For each scar on Effia’s body, there was a companion scar on Baaba’s, but that didn’t stop mother from beating daughter, father from beating mother.

Matters were only made worse by Effia’s blossoming beauty. At twelve, her breasts arrived, two lumps that sprung from her chest, as soft as mango flesh. The men of the village knew that first blood would soon follow, and they waited for the chance to ask Baaba and Cobbe for her hand. The gifts started. One man tapped palm wine better than anyone else in the village, but another’s fishing nets were never empty. Cobbe’s family feasted off Effia’s burgeoning womanhood. Their bellies, their hands, were never empty.