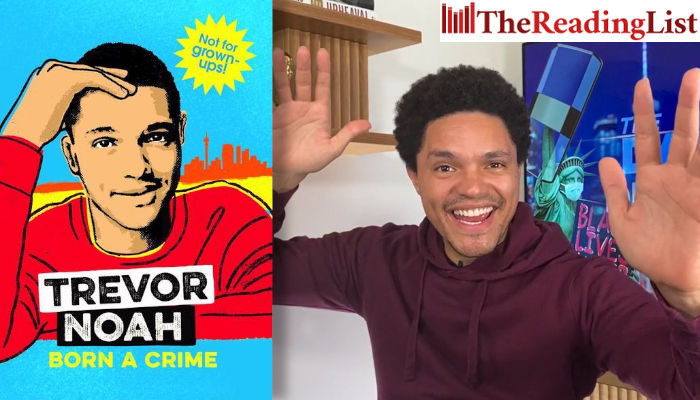 South African booksellers have voted and the overall winner of the 2020 SA Book Awards is … Trevor Noah for the child adaptation of Born a Crime, published by Pan Macmillan SA!

The winners of the 2020 SA Book Awards were announced on Thursday, 1 October, during a virtual ceremony.

Jackie Phamotse won the Adult Fiction prize for her book Bare: The Cradle of the Hockey Club, while Pieter du Toit scooped the Adult Non-Fiction prize for Stellenbosch Mafia (Jonathan Ball Publishers). Each of the winners gave their acceptance speech via video.

Born a Crime won the Children’s prize and the grand prize.

Noah said in his acceptance video:

‘As a first-time author, this book was my blood, sweat and tears. It is my family’s story, it is my country’s story and so I genuinely appreciate you for honouring me with this award.’

‘I am so grateful, I cannot thank you enough. My writing journey has been the hardest – I’m self-published and self-funded – and to receive this award today is an honour.’

Du Toit celebrated booksellers and readers in his speech:

‘Thank you so much for this unexpected award, it’s so nice to get recognition for your work,’ he said. ‘You don’t write books to become famous, you write because you enjoy the pursuit of writing and it would not be possible to get a book out there without the support of everyone who sells the book and everyone who buys the book.’

Celebrating its 20th Anniversary, the winners of this year’s SA Book Awards were announced today (Tuesday, 1 October 2020) as part of a special virtual ceremony hosted by SABA, sponsored by Nielsen Book and supported by PASA. Over the last 20 years, the awards have recognised books written and published in South Africa, as voted for by South African booksellers, and recent winners have included Sam Beckbessinger, Jacques Pauw and Sally Andrew.

This year a record number of booksellers voted for their favourite titles, in three categories, from a shortlist of bestselling titles published in South Africa and written by South African authors, as measured by Nielsen BookScan South Africa in 2019.

The Adult Fiction prize was won by Jackie Phamotse, a self-published author, for her book Bare: The Cradle of the Hockey Club. Jackie described winning the award as an honour, thanking everyone who has supported her over the years.

The Adult Non-Fiction prize was won by Pieter du Toit for Stellenbosch Mafia. Pieter thanked the booksellers and book dealers for all their hard work ensuring that books are available to the South African public, also praising them for continuing to encourage reading and the pursuit of writing.

The Children’s prize was won by previous winner Trevor Noah for the child adaptation of Born a Crime. On accepting his award Trevor said, ‘Writing a book was a very scary experience but turning the book into a book specifically for kids was even more scary because children have a very short attention span if your book is boring!’ He went on to thank all the kids who read the book, the parents who read the book with their children and the teachers who recommended the book to their students.

The overall winner, receiving the highest number of votes and the clear favourite among booksellers, was indisputably Trevor Noah. On receiving the news, he said, ‘This book was my blood, sweat and tears. It was my family’s story and my country’s story.’ He went on to praise South African authors, saying they have the most amazing and inspirational stories to tell, encouraging them to continue writing them down so they can be shared with the rest of the world. Trevor has donated his prize money to the Trevor Noah Foundation which supports underserved youth with the educational foundations and opportunities they need to become resilient future leaders of South Africa.

This year there are three categories plus an overall winner.

The shortlisted books for the 2020 SA Book Award – Adult Fiction were:

Death on the Limpopo by Sally Andrew

The Zulus of New York by Zakes Mda

Bare: The Cradle of the Hockey Club by Jackie Phamotse

The shortlisted books for the 2020 SA Book Award – Adult Non-Fiction were:

Betting on a Darkie by Mteto Nyati

The shortlisted books for the 2020 SA Book Award – Children’s were:

Born a Crime by Trevor Noah