‘There is little doubt that BEE needs a rethink’ – Chris Bishop, author of The BEE Billionaires: Redressing the Imbalances of the Past, or Creating New Ones
More about the book! 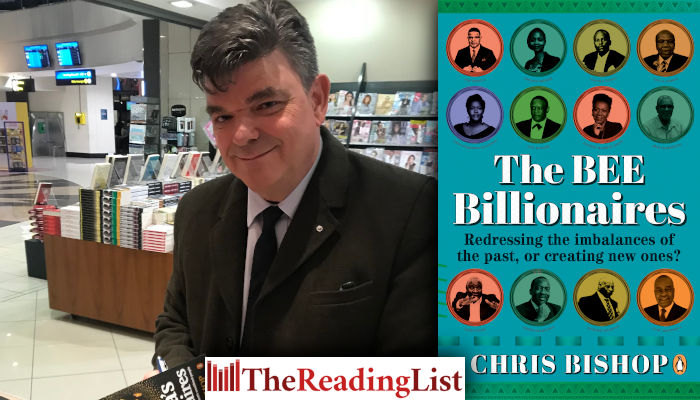 Chris Bishop, veteran journalist and the founding editor of Forbes Africa and Billionaire Tomorrow, describes the process he went through in writing a book that questions the impact of one of the biggest economic experiments in Africa that began a quarter of a century ago: black economic empowerment.

‘The world of black economic empowerment is a confusing world that is as murky as it is fascinating.’

It is tough writing a book on a controversial subject knowing, as worthy as it may be, you are on a hiding to nothing.

Nearly a decade of commenting on government policy as well as juggling the lives and egos of the rich and powerful as the editor of Forbes Africa, and now the online publication Billionaire Tomorrow, taught me it is never easy and often fraught.

You always get flak, from all quarters, when you write about the wealthy. Throw in politics, controversial government policy and the growing issue of poverty and almost everyone has a strong opinion.

Yet, I decided to put my arm in the fire by spending more than a year penning my second book, The BEE Billionaires. It was a good omen, first off, that the respected former finance minister Nhlanhla Nene saw enough value in the book and in me to take time to write an insightful forward to help set the tone.

The world of black economic empowerment is a confusing world that is as murky as it is fascinating, and likely to loom ever larger in the struggling South African economy. I thought there was no better time for a critical look at the policy after nearly 20 years of road testing through the potholes and profits.

The original idea of the book was merely to look at the billionaires who made money from it. But I felt there was a much richer story to be told – the follies, the fronting, burnt fingers, the foul-ups and the failure of often vague policy to enact change, especially in key industries like mining. Many complain every government official has a different version of the rules.

At a time when economic and political turmoil has riven South Africa, questions had to be asked of the politicians and business about how effective the policy is. The gap between rich and poor appears to be, if anything, growing larger; even those who have made millions from it admit little has trickled down to the poor.

In questioning this policy, I interviewed President Cyril Ramaphosa and a frustrated Zodwa Ntuli, the BEE Commissioner, who struggles to oversee policy and clamp down on those who ignore it .
Clouding BEE’s execution is that it is an emotive subject that draws extreme views from across the political spectrum that detract from the real issues. There is little doubt that it needs a rethink.
I wanted a human-interest approach from people who actually deal with BEE day in, day out. I also kept the pundits and analysts to a minimum and tried to steer clear of the lunatic fringe of extreme politics on all sides.

I drew on nearly 30 years on the road in Africa to also bring in the important historical context; from tales of Mandela, Maponya and the Kunene brothers – pioneers in black business long before policy.

This is not an academic treatise; more of a story from the horse’s mouth. The deals, fears, failures, from all sides.

We gathered the passionate words of Daphne Mashile-Nkosi who says, ‘People will continue to abuse it, to use it to actually continue to grow their patronage networks, which is not helpful to the South African economy.’

The feisty lawyer Linda Mabhena-Olagunju who puts up green energy turbines and tilts at the windmills of discrimination in the boardroom.

Ipeleng Mkhari who poured her anger from the humiliation of being used as a BEE front to make a fortune in luxury hotels.

Then there is Tshepo Mhloele, Africa’s media giant, on failing in furniture to a fortune from a canny Capitec deal; Multi-millionaire Sandile Zungu a fierce proponent of a policy that, in his own words, took him from ‘Vukuzakhe High to Hilton College to UCT to Harvard.’

Battler Fred Robertson, who brought investment to the people, and Tim Tebeila, the mining king who grew up barefoot and now can afford the same expensive furniture as Donald Trump.

This is a rich, colourful, story, written from the heart with the passionate words of those who made fortunes from BEE policy in gritty real-life stories.

Anyone who cares about the future of South Africa should read this book – everyone is likely to have an opinion.

The BEE Billionaires is out now.