The Queen of Crime returns! Find out more about Val McDermid’s new novel Still Life – a Karen Pirie thriller
More about the book! 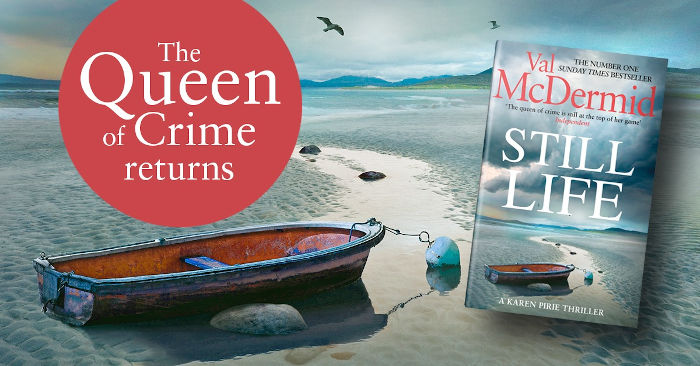 The number one bestseller and unrivalled queen of crime Val McDermid is back with her most exhilarating, breathtaking thriller yet!

Still Life is out now from Jonathan Ball Publishers.

On a freezing winter morning, fishermen pull a body from the sea. It is quickly discovered that the dead man was the prime suspect in a decade-old investigation, when a prominent civil servant disappeared without trace. DCI Karen Pirie was the last detective to review the file and is drawn into a sinister world of betrayal and dark secrets.

But Karen is already grappling with another case, one with even more questions and fewer answers. A skeleton has been discovered in an abandoned campervan and all clues point to a killer who never faced justice – a killer who is still out there.

In her search for the truth, Karen uncovers a network of lies that has gone unchallenged for years. But lies and secrets can turn deadly when someone is determined to keep them hidden for good …

Val McDermid is a number one bestseller whose novels have been translated into more than 30 languages, and have sold over 17 million copies. She has won many awards internationally, including the CWA Gold Dagger for best crime novel of the year and the LA Times Book of the Year Award. She was inducted into the ITV3 Crime Thriller Awards Hall of Fame in 2009, was the recipient of the CWA Cartier Diamond Dagger in 2010 and received the Lambda Literary Foundation Pioneer Award in 2011. In 2016, McDermid received the Outstanding Contribution to Crime Fiction Award at the Theakston Old Peculier Crime Writing Festival and in 2017 received the DIVA Literary Prize for Crime, and was elected a Fellow of both the Royal Society of Literature and the Royal Society of Edinburgh. McDermid has served as a judge for the Women’s Prize for Fiction and the Man Booker Prize, and was Chair of the Wellcome Book Prize in 2017. She is the recipient of six honorary doctorates and is an Honorary Fellow of St Hilda’s College, Oxford. She writes full-time and divides her time between Edinburgh and East Neuk of Fife.