The Inheritors by Eve Fairbanks – a sweeping and exquisite look at what really happens when a country resolves to end white supremacy
More about the book! 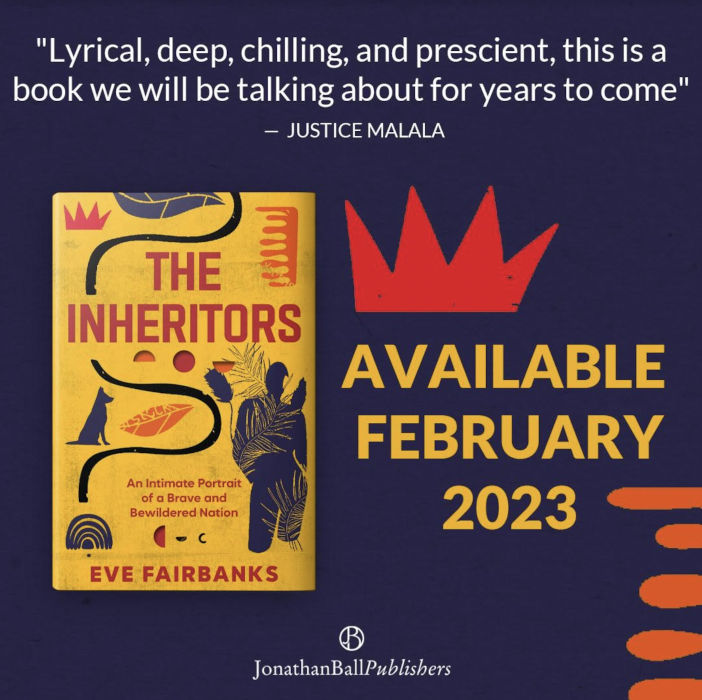 The Inheritors by Eve Fairbanks will be out in February from Jonathan Ball Publishers.

Fairbanks is a former political writer for The New Republic. Her work focuses on change: in cities, countries, landscapes, morals, values, and our ideas of ourselves. She has been published in The Washington Post, The New York Times and The Guardian, among other outlets. Born in Washington, DC, United States, and raised in Virginia, she’s lived in Johannesburg, South Africa, for 13 years. The Inheritors is her first book.

‘Brave … ambitious … [a story of] admirable people, brave in the face of unbearable poverty and determined to rise out of it … [Fairbanks’s characters] are also capable of savage introspection and, at times, willing to laugh about themselves.’ – Rian Malan, Compact Magazine

‘Many times while reading this book you will stop, shiver, shake your head, and sigh. Lyrical, deep, chilling, and prescient, this is a book we will be talking about for years to come.’ – Justice Malala

‘Eve Fairbanks writes with a rare combination of fearless psychological insight and political intelligence. This is a tremendous book: utterly absorbing and urgently thought-provoking.’ – Philip Gourevitch, author of We Wish to Inform You That Tomorrow We Will Be Killed With Our Families, winner of the National Book Critics Circle Award

‘Eve Fairbanks brings post-apartheid South Africa to rich, brilliant, witty, tragic, and humane life as only a wonderfully gifted writer who has lived her subject can.’ – George Packer, author of The Unwinding, winner of the National Book Award

‘Fairbanks’s empathetic, comprehensive reporting shines… providing insight into how ordinary people build lives in the aftermath of political upheaval…. Her curiosity seems boundless… swept up in the rich tapestry of the country and… an abundance of personal memories, fables, speculation and musings.’ – The New York Times Book Review

A dozen years in the making, The Inheritors weaves together the stories of three ordinary South Africans over five tumultuous decades in a sweeping and exquisite look at what really happens when a country resolves to end white supremacy:

All three and many other had to remake their own lives while facing huge questions: What do we owe to history? And what will people who care about being good do when the meaning of right action changes nearly overnight?

Observing subtle truths about race and power that extend well beyond national borders, Fairbanks explores questions that preoccupy so many of us today: How can we let go of our pasts, as individuals and as countries? How should historical debts be paid? And how can a person live an honorable life in a society that – for better or worse – they no longer recognise?

The Inheritors–my book on post-apartheid South Africa–is coming in February in a beautiful new South African edition from @JonathanBallPub! Reported over 10 years, it's about three real, "ordinary" people–and regret, desire, envy, and the yearnings that lie behind fear. pic.twitter.com/dICXWdR52O