The Friday Night Book Club: Read an excerpt from Gail Schimmel’s The Park
More about the book! 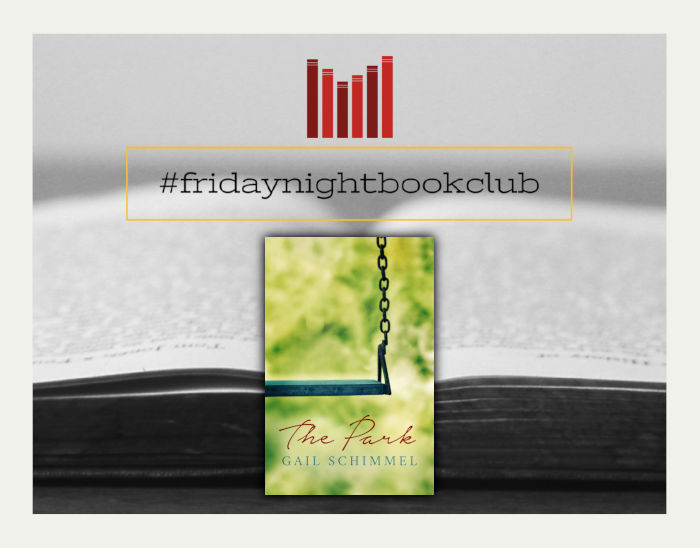 Staying in this evening? Settle in with a glass of wine and this extended excerpt from The Park by Gail Schimmel, a novel about good mothers and shocking secrets.

Schimmel is the author of Marriage Vows (2008), Whatever Happened to the Cowley Twins? (2013) and The Park. Her new novel, The Accident, will be out in March 2019, from Pan Macmillan!

Good mothers take their children to the park.

Rebecca doesn’t expect to make new friends at this stage of her life. But when she becomes mother to little Amy, she finds herself spending her afternoons in the park. There she meets other mothers: first flamboyant, fun Rose, and then single-mom Lilith, whose inner strength is tangible, and whose eyes never leave her toddler.

Very soon the women have formed a trio – the type of friends who feel at home in each other’s kitchens – and their daughters begin to behave like sisters. But Rebecca is about to learn that friendship is not always what it seems, and that sometimes you trust the wrong people. At exactly the moment when she needs to lean on them, one of her new friends harbours a shocking secret, and the other will turn on her in a way she could never have anticipated.

Her two park friends will change Rebecca’s life – and her family – forever.

Most days back then – before it all happened – I took Amy to the park. I spent hours there.

The people you see in the park depend on the time of day that you go. In the mornings, I saw mostly nannies, small flocks pecking at the day’s gossip in their generic overalls, sweat collecting at the edge of their doeks. They brought babies who lay gurgling on blankets, or who slept quietly in the cocoon of warmth on a nanny’s back. Black women looking after white babies. Then Amy and I would arrive, the ultimate anomaly at the playground: a white woman with her cappuccino-coloured baby.

The nannies sometimes smiled at me, and one large, friendly-looking woman always waved at me from across the grass. If she walked past, she would say, ‘Good morning, my sis-tah,’ smiling like we shared a secret. Sometimes I fantasised about stealing her to come to work for me, with her large chestful of love. But there were, of course, several reasons this wouldn’t work. The first was Gugu, the woman who already worked for us. And the second was the unavoidable fact that my friend was so fat that she could barely pick up her little charges, a pair of red-headed twins.

Amy needed someone like Gugu – whippet-like in shape and movement, capable of catching my little girl, who sometimes seemed to be answering the call of the urban forest beyond. But mostly the nannies ignored me, making me feel strangely isolated and unwanted, flashes of early school days when other girls would randomly decide that for that week, I was the school pariah, unworthy of their friendship.

At midday in the week, the park was mostly empty. Even I seldom went then, partly because of the heat, and partly because Amy napped, which gave me a few precious hours to paint. Sometimes the nap eluded us, and in desperation Amy and I would set off, occasionally finding her nap along the way. But being at the park alone except for the sleepy looking security guard made me jumpy.

Once, I took Gugu with me for company, and the safety of numbers. But she was on edge, worrying that Amy might fall off the slide, and kept mentioning the ironing she had waiting. I’d fooled myself into thinking that a trip to the park might be a treat for her, a break from domestic drudgery. Instead, I was left feeling guilty and stupid for having dragged her away from a full day’s work, and that in turn made me feel defensive and angry. So I didn’t take her to the park again.

Although, if Amy had her way, Gugu would have come with us everywhere. From when Amy was a tiny baby, she would gurgle with happiness at the sight of Gugu, and stretch her fat arms to reach for Gugu’s thin ones. If I went to my studio to work, I’d come back to find Amy curled up on Gugu’s back, or playing on her lap, sometimes just happily patting Gugu’s brown cheeks. It tortured me. For a while I stopped working so that I never had to leave Amy with her, not have to resign myself to the fact that Amy never cried or reached for me when I left or returned. But we needed the money, and to be honest, I needed my work. Needed it in a primal way that I worried about, because surely I should need my daughter more?

For the first year I constantly questioned myself – wondered if I had fewer motherly feelings because Amy wasn’t my biological child, and worried that she sensed it. I worried that she seemed to love Gugu more than me, not because Gugu is a dear (which she is), but because she’s black. I wondered if the connection between them was somehow more biological than ours could ever be – that Amy saw herself reflected more closely in Gugu’s dark eyes. I lay awake at night thinking about these things, and nothing Sean said could comfort me because he could never understand what it was to be a mother, what it was to compete with Gugu. Nobody had yet displaced his role as father.

Then two things happened that helped. The first came from Gugu herself. She handed Amy back to me one morning, after I had done a good few hours of work, and she smiled and said, ‘This baby, she loves her mommy <em>too</em> much.’

I hid my face in Amy’s warm neck to hide my delight, breathing in her baby-smell. ‘Really?’ I muttered.

I could have kissed her.

The second thing that made me feel better was a woman I met at the park. She was sitting near me one afternoon, watching her child – a carbon copy of her, with thick black hair and large blue eyes – who was playing with their nanny. The woman sighed and turned to me, saying, ‘Doesn’t it kill you how they seem to love the nanny better? I swear, I’m never bringing her with to the park again.’

The woman laughed. ‘Honey,’ she said, ‘all my friends have this struggle. We love our nannies; we’d die without them. But we want to kill them.’

That was Rose. My first park friend.

Because that was when mommies came to the park: in the late afternoon, driving or strolling or carrying or pushing their babies, toddlers and children. Not for us the friendly ease of the nanny flock, but a careful sitting in our own spaces, or playing with our own children, until some hidden barrier came down, and tentative overtures of friendship were made between women who’d seen each other many times before.

To me, Rose was magnificent. Her face seemed friendly – open and honest, with her wide, lipsticked smile and glowing sapphire eyes. Over the slow afternoons that I got to know her, I noticed that Rose asked questions and really listened to the answers. She never seemed to judge, and always had a kind word for another mother, like, ‘It’s so fucking hard. Isn’t it?’ I loved the way she swore, even in front of the children; I was always annoyed by mothers with silly little-child voices designed not to traumatise children, even when they were talking to adults. Not Rose. She didn’t talk about herself a lot – it was refreshing how supportive she was without dumping her own concerns right back on you. She let you know that she found motherhood hard too, without burdening you with specifics. She’d tell funny stories about herself – light, meaningless vignettes that told you next to nothing about her life, but left you feeling as if she understood.

But best of all, I could see that she adored her little girl. She hugged and kissed her whenever she came within reach, running over unselfconsciously if little Maggie fell and hurt herself. She’d smack the
offending play apparatus, or once the blade of grass, that Maggie had accused of hurting her. ‘Don’t hurt my Princess Sunshine,’ she would say, her arms around Maggie.

Rose was also constantly snapping pictures of Maggie on her phone, and after I had known her for a few weeks, she started taking pictures of Amy and I, and sending them to me, often with a wry comment. There was one that always made me laugh – me looking completely worn out and Amy almost climbing on my shoulders, looking like a crazy person. Rose wrote, ‘Mothering. The world’s greatest joy.’ I loved knowing that Rose was a good, kind mom, but that she didn’t seem to judge other moms. It made me feel normal and accepted. Or, at least, accepted by Rose.

Rose also dressed differently to everyone else. At the park most mothers wore either jeans and T-shirts, or kind of earth-mothery outfits in brown and beige and white, which flowed and hid their bodies. The jeans women wore takkies and slops, and the earth moms wore Jesus sandals, and sensible flat shoes in winter.

Rose wore bright colours and preferred skirts and dresses, even though they’re not practical for the playground. Her shoes were ballet pumps in jewel colours. She wore interesting beads, and would unwind Maggie’s little fingers from her necklaces saying, ‘Those are mine, Princess Sunshine.’ She was unapologetically large, but in a Rubinesque, Nigella-ry way that made you want to run out and buy a kilogram of chocolate so that you too could have a plunging cleavage and a soft embrace for a toddler. She hugged and kissed Amy too, after a while. Amy loved it, and soon she would run to Rose, flinging her small self around Rose’s ample legs.

Rose, with her friendly facade, taught me so much. She taught me about the importance of reaching out to other mothers, about not judging women who are doing the same hard job as you as best they can and, most of all, about being honest about how very hard motherhood is. Those were the things she talked about. And those were the things I saw her do. Rose changed how I felt about myself as a mother, and as a woman. She changed the way I behaved, and she made me reach out more. I often wonder though – without Rose, would I have met Lilith?