‘The experience of grief is as unique to each of us as our fingerprints’ – Our Ghosts Were Once People, a new book edited by Bongani Kona
More about the book! 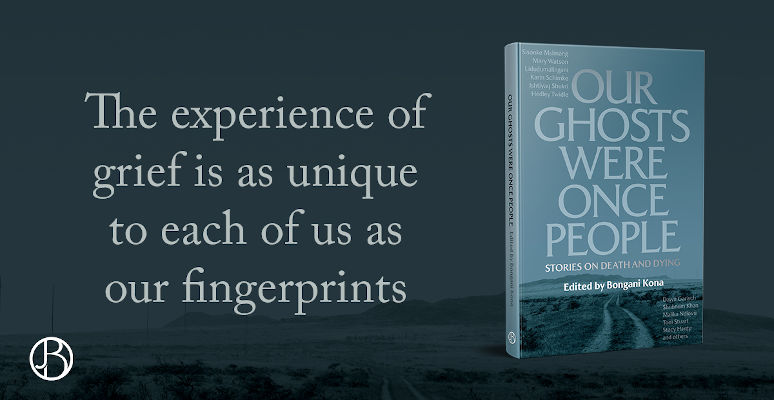 Our Ghosts Were Once People: Stories on Death and Dying edited by Bongani Kona is out now from Jonathan Ball Publishers.

‘I would get out of the car at every shopping centre and want to ask the stranger walking by with their trolley: “Why are you still shopping? Someone I love has died.”’

Death is a fact of life but the experience of grief is as unique to each of us as our fingerprints.

This poignant and thought-provoking anthology gives us portraits of grief as seen through the eyes of writers and poets such as Sisonke Msimang, Dawn Garisch, Lidudumalingani, Mary Watson, Ishtiyaq Shukri, Hedley Twidle, Karin Schimke, Khadija Patel, Shubnum Khan and many others.

The contributions range from the deeply personal: a poet chronicles her relationship with her troubled, abusive father, a World War II survivor ‒ to the political: an investigator from the Missing Persons Task Team draws us into the ongoing search for the remains of activists who were murdered by the apartheid state between 1960 and 1994 ‒ to the philosophical: a writer ponders the ethics of killing small animals.

Perhaps grief never truly ends but these stories transform the pain of death into something beautiful so that we can find ways to live with loss.

Bongani Kona is a writer, editor, and co-curator of the Archive of Forgetfulness project. He studied creative writing at the University of Cape Town and is the co-editor of Migrations (2017), a short story collection. His work has been broadcast on BBC and appeared in a variety of publications and anthologies, including Chimurenga, Black Tax: Burden or Ubuntu and Safe House: Explorations in Creative Nonfiction. Kona was shortlisted for the Caine Prize in 2016 and was awarded the 2019 Ruth First Fellowship.