The Dragon Lady, Louisa Treger’s brilliant second novel – a brilliant evocation of life in 1950s Rhodesia
More about the book! 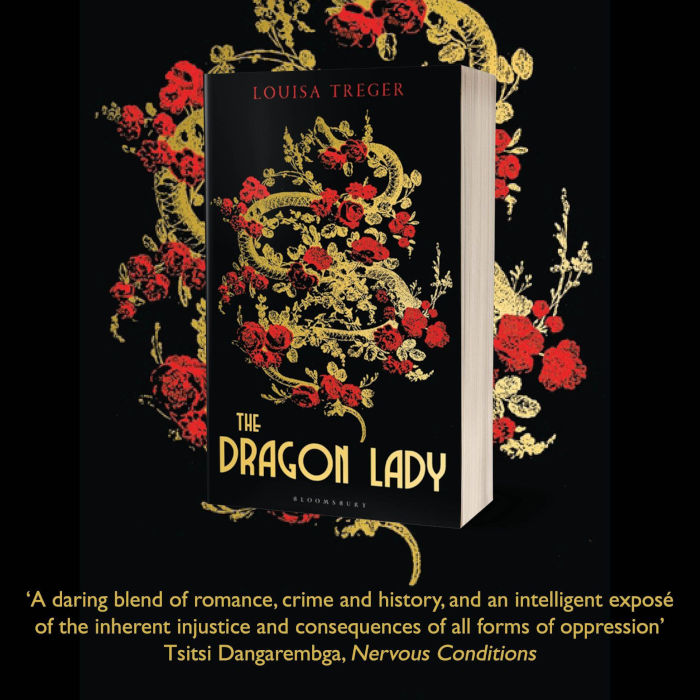 Deeply evocative of time and place, The Dragon Lady subtly blends fact and fiction to paint the portrait of an extraordinary woman in an era of great social and cultural change.

‘Louisa Treger’s brilliant second novel is a daring blend of romance, crime and history, and an intelligent exposé of the inherent injustice and consequences of all forms of oppression.’
– Tsitsi Dangarembga

‘Treger has captured the last days of colonial Rhodesia perfectly. It is not just Lady Courtauld’s story, but also the people fighting for the country’s future. And while the book may only focus on a small piece of Zimbabwe’s long complicated history, it does so with emotion and fire.’
– Sally Partridge

Opening with the shooting of Lady Virginia ‘Ginie’ Courtauld in her tranquil garden in 1950s Rhodesia, The Dragon Lady tells Ginie’s extraordinary story, so called for the exotic tattoo snaking up her leg.

From the glamorous Italian Riviera before the Great War to the Art Deco glory of Eltham Palace in the thirties, and from the secluded Scottish Highlands to segregated Rhodesia in the 1950s, the narrative spans enormous cultural and social change. Lady Virginia Courtauld was a boundary-breaking, colourful and unconventional person who rejected the submissive role women were expected to play.

Ostracised by society for being a foreign divorcée at the time of Edward VIII and Mrs Simpson, Ginie and her second husband, Stephen Courtauld, leave the confines of post-war Britain to forge a new life in Rhodesia, only to find that being progressive liberals during segregation proves mortally dangerous. Many people had reason to dislike Ginie, but who had reason enough to pull the trigger?

Louisa Treger has worked as a classical violinist. She studied at the Royal College of Music and the Guildhall School of Music and worked as a freelance orchestral player and teacher. Treger subsequently turned to literature, gaining a First Class degree and a PhD in English at University College London, where she focused on early 20th century women’s writing and was awarded the West Scholarship and the Rosa Morison Scholarship ‘for distinguished work in the study of English Language and Literature’. Her debut novel, The Lodger, was published in 2014.