The Book of Echoes by Rosanna Amaka – a heart-warming novel about survival, endurance and the wounds of slavery
More about the book! 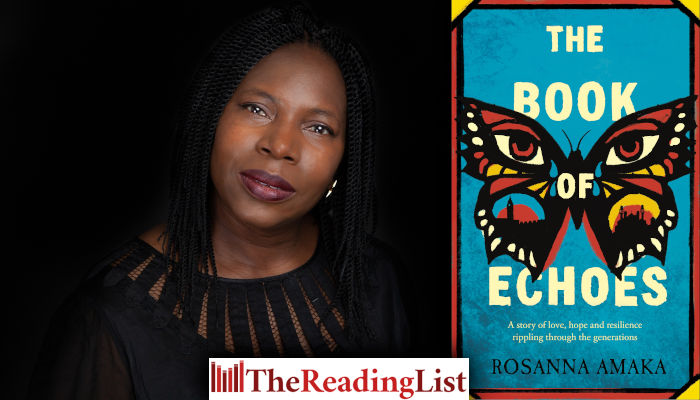 The Book of Echoes – the sweeping, uplifting and inspirational story of how a boy from Brixton and a girl from Lagos reinvent their lives in modern-day London.

Narrated by the spirit of an enslaved African, this is a searing debut about hope, redemption and the wounds of slavery.

Over 200 years ago in Africa, a woman tosses her young son to safety as she is hauled off by slavers. After a brutal sea passage, her second child is snatched away. Although the woman doesn’t know it yet, her spirit is destined to roam the earth in search of her lost children.

It will make its way to 1980s Brixton, where she watches teenage Michael attempt to stay out of trouble as riots spit and boil on the streets; and to a poor village in Nigeria, where Ngozi struggles to better her life.

As the invisible threads that draw these two together are pulled ever tighter, The Book of Echoes asks: how can we overcome the traumas of the past when they are woven so inextricably with the present?

‘This impressive debut follows two young black lives … a beautifully written testament to oppression that reverberates across the centuries.’ – Mail on Sunday

‘A searing, rhapsodic novel. The Book of Echoes is filled with beauty, devastation and the power of ancestral connections that ripple through the ages.’ – Irenosen Okojie

‘Recommended Debut: A powerfully redemptive story of the resilience of love in the face of racism.’ – Independent

‘So bewitching I almost felt like I time-travelled back into Brixton 1981. A gorgeous book – totally recommended.’ – Alex Wheatle

Rosanna Amaka was born to African and Caribbean parents. She began writing The Book of Echoes 20 years ago to give voice to the Brixton community in which she grew up. Her community was fast disappearing – as a result of gentrification, emigration back to the Caribbean and Africa, or simply with the passing away of the older generation. Its depiction of unimaginable pain redeemed by love and hope was also inspired by a wish to understand the impact of history on present-day lives. Amaka lives in South London. This is her first novel.