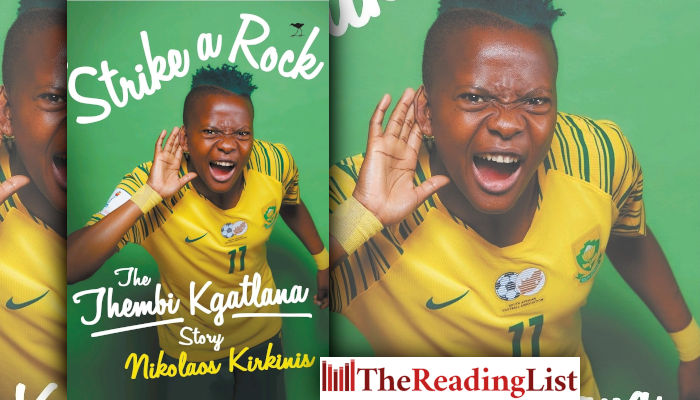 Strike A Rock: The Thembi Kgatlana Story, written by Nikolaos Kirkinis, is out now from Jacana Media.

‘I practised my whole life to be me.’ – Thembi Kgatlana

Kgatlana is a Banyana Banyana star, 2018 CAF Women’s Player of the Year, and recently signed for Spanish giants Atletico Madrid.

Thembi Kgatlana, the Mohlakeng girl who went on to become the continent’s best footballer and a global superstar, has told her story.

Thembi chronicles her life and times through the prism of culture, identity, family and addiction. This is a soaring tale about hope, about defeating the odds, defying stereotypes and achieving the impossible. The trials and victories of Banyana Banyana are told here too: they are the women who will carry South African football into the future.

If you read one biography this year, let it be this one.

Thembi Kgatlana donned the country’s colours for the 2016 Summer Olympics, and was the leading goal scorer. She bagged Player of the Tournament at the 2018 Africa Women’s Cup of Nations. In 2019 she brought South African soccer fans to their feet when she netted the country’s first-ever goal at the FIFA Women’s World Cup. She has lived in America, playing for Houston Dash, in China, where she played for the Beijing BG Phoenix, in Portugal, with the SL Benfica and in Spain with the SD Eibar.

When Thembi was 21 she set up the Thembi Kgatlana Foundation in Mohlakeng investing in girls’ soccer.

Thembi has just signed a two-year deal with Atletico Madrid.

Nikolaos Kirkinis is the author of the bestselling book The Curse of Teko Modise. He was born and raised in Johannesburg and is passionate about the local game, sports writing and the people who make up this extraordinary world.

MY BOOK IS FINALLY HERE!
It is not easy to have a dream and the talent, and still face a world that wants you to have neither. This is a book about difficult odds, about cruelty, about broken families, and about addiction. Mostly however, this is a soaring tale of hope. pic.twitter.com/8WdTv3cyjQ

Don’t miss Jacana Media’s classes in publishing, writing, and other forms of insanity!

home body by rupi kaur: a collection of raw, honest conversations with oneself

Girl A by Abigail Dean – ‘the biggest fiction debut of 2021’