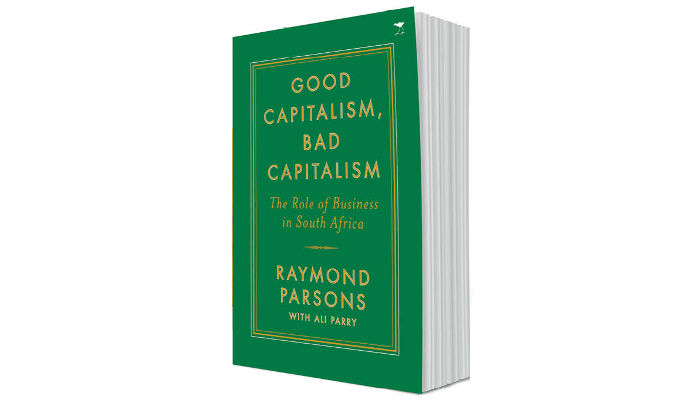 Good Capitalism, Bad Capitalism The Role of Business in South Africa, by Raymond Parsons, and Ali Parry, is out soon from Jacana Media.

South Africa has entered a new era, with the country’s recently elected president, Cyril Ramaphosa, promising a ‘new dawn’. But will President Ramaphosa and his administration, together with business and labour, be able to turn the economy around and at last satisfy the aspirations of millions of people who, for decades, have been promised better lives?

And what role should business – and organised business – be playing in all of this? Although business is the main driver of the economy, it has for years been a passenger in economic policy-making.

These and other questions relating to South Africa’s complex character and uncertain future prospects are thoroughly explored in Good Capitalism, Bad Capitalism: The Role of Business in South Africa.

Written by prominent economist Raymond Parsons, together with Ali Parry, the book offers a balanced and absorbing analysis of what various institutions and individuals have (and have not) done to eradicate the legacy of apartheid and bring South Africa to where it is today.

Freed from the shackles of the Zuma regime, South Africa now has a decisive opportunity to take stock of what has gone wrong in the country since the advent of democracy and take appropriate corrective action. But will it? What are the chances of success?

History can so easily repeat itself if politicians and business leaders choose to ignore the lessons of the past. Fresh thinking and a large dose of pragmatism are imperative if South Africa is to turn the corner and build a bigger, stronger and better economy. At this critical juncture, organised business institutions in South Africa also need to reprise their role as the voice and champion of the constituencies they are mandated to serve.

‘Hillbrow, 1967. The New York of Africa.’ Read an extract from John Hunt’s new novel The Boy Who Could Keep a Swan in his Head