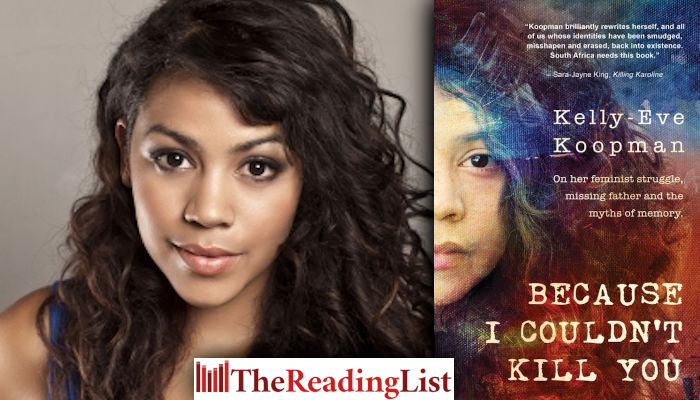 Because I Couldn’t Kill You by Kelly-Eve Koopman is out in August from Jacana Media and MFBooks Joburg.

In this debut collection, feminist Kelly-Eve Koopman grapples with the complex beauty and brutality of the everyday as she struggles with her family legacy. She tries unsuccessfully to forget her father – an embattled journalist and anti-apartheid activist, desperately mentally ill and expertly emotionally abusive – who has recently disappeared, leaving behind a wake of difficult memories.

Mesmerisingly, Koopman wades through the flotsam and jetsam of generations, among shipwrecks and sunken treasures, in an attempt at familial and collective healing.

Sometimes tragic, sometimes hilarious, she faces up to herself as a brown, newly privileged ‘elder millennial’, caught between middle-class aspirations and social justice ideals. An artist, a daughter, a queer woman in love, she is in pursuit of healing, demanding justice, while trying to lose those last five kilograms, to the great disappointment of her feminist self.

‘Koopman brilliantly rewrites herself, and all of us whose identities have been smudged, misshapen and erased, back into existence. South Africa needs this book.’ – Sara-Jayne King, author of Killing Karoline

The Binding is an unforgettable, magical novel: a boundary-defying love story and a unique literary event

Traditional Leaders in a Democracy – exploring how chieftaincy is practised, experienced and contested in contemporary South Africa