‘South Africa did not know what it was like to lose’ – Ian Hawkey chats about his new book Vuvuzela Dawn: 25 Sports Stories that Shaped a New Nation
More about the book! 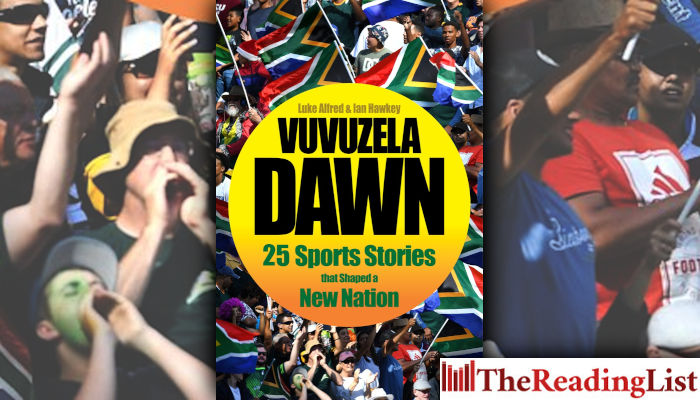 From Bafana Bafana’s Africa Cup of Nations win to the fabled ‘438’ Proteas game, Vuvuzela Dawn: 25 Sports Stories that Shaped a New Nation goes behind the scenes of the great moments and record-breaking triumphs from 1994 to the present.

Ian Hawkey chatted to The Reading List to tell the story of the book.

TRL: In a way, the book’s chapters follow the trajectory of post-94 South Africa: “Honeymoon”, “Innovators”, “Hard Times”, “Celebrating Afresh”, and “Higher, Faster, Longer”. What do you think, or hope, the next chapter will be titled?

Ian Hawkey: Of course, I’d like to say, “Top of the World” or something like that. Actually, what we have ahead of us very soon are some big chapters, in terms of challenges. The state of South African sport generally will be judged on what happens between June and November this year: there’s a cricket World Cup, overlapping with Bafana Bafana at the Africa Cup of Nations, both tournaments where the national teams have not met expectations in the last two decades. Then a rugby World Cup, starting in September.

TRL: There’s something almost quaint or naive about some of the stories you tell from the 1990s. Penny Heyns, for instance, recalls how during the Barcelona Olympics in 1992 a team doctor advised them to take Corenza C for the flu, which resulted in them briefly testing positive in a doping test. Do you think this ingenuousness played in South Africa’s favour in those sporting successes from early democracy?

Ian Hawkey: Definitely. My co-author, Luke Alfred, puts this very elegantly, when he says that a great virtue of South African sportspeople on the international stage in the immediate post-1994 period was they did not know what it was like to lose in major competitions. You can call it naïveté, but there was a fearlessness there.

TRL: There are some lovely little obscure titbits for sports fans in the book – Hansie Cronje being mistaken for Pete Sampras at Wimbledon in 1995, or All Blacks Zinzan Brooke and Josh Kronfeld playing guitar and singing mournful Maori songs in the dressing room after their loss in the 1995 World Cup final being among those that will make readers smile. What were some of the best bits of trivia you uncovered?

Ian Hawkey: That was certainly one of the pleasures of being able to do in-depth research and have long conversations with people. Sizwe Ndlovu, who was in the lightweight rowing crew who won a gold medal for South Africa at the 2012 Olympics, told us how his relationship with the water began as a boy: he used to plunge in from the edge of dams near his home in KZN, having tied empty two-litre milk cartons around his waist to keep him afloat. I very much enjoyed Hannes Strydom’s self-medication during the 1995 Rugby World Cup: his tournament looked like it might be over when he needed 34 stitches on a gash to his face. His rehab consisted of coating the wound with an egg white and holding a steak on it to draw out the swelling. It got him cleaned up enough to be back in the team by the semi-final.