So, for the Record: Behind the Headlines in an Era of State Capture by Anton Harber – a disquieting exposé and a celebration of brilliant investigative reporting
More about the book! 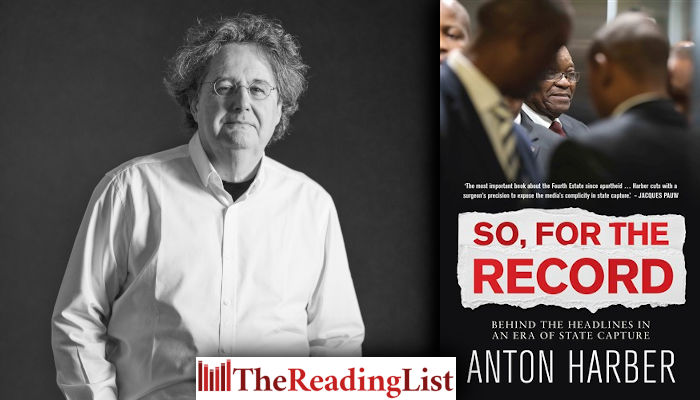 So, for the Record: Behind the Headlines in an Era of State Capture by Anton Harber is out in September 2020 from Jonathan Ball Publishers.

In So, for the Record, veteran journalist Anton Harber brings all his investigative skills to bear on his very own profession, the media.

For two years he conducted dozens of interviews with politicians, journalists, policemen and ‘deep throats’, before piecing together two remarkable tales.

The first is a chilling story of police death squads, rogue units and renditions, and how South Africa’s leading newspaper was duped into doing the dirty work of corrupt politicians. The second starts with a broken and discarded hard drive and evolves, with many near misses, into the exposure of the depths of the Guptas’ influence over the ruling party.

Harber’s two tales reveal the lows and highs of journalism during an era of state capture.

His book is both a disquieting exposé of how easily the media can be duped by a conniving cabal for its own selfish ends, and a celebration of brilliant investigative reporting by brave and ethical journalists.

Anton Harber was a founding co-editor of the Weekly Mail, later known as the Mail & Guardian. He was the chair of the Conference of Editors in 1991, the National Association of Broadcasters in 1998, and the Freedom of Expression Institute in 2010. He serves on the board of directors of the Global Investigative Journalism Network and the Centre for Collaborative Investigative Journalism. He is an adjunct professor of journalism at Wits University, a columnist for Business Day, and the co-editor or author of five books.