She smiled a half-smile and asked, ‘Do you have a gun?’ – Read an excerpt from Exit West by Mohsin Hamid
More about the book! 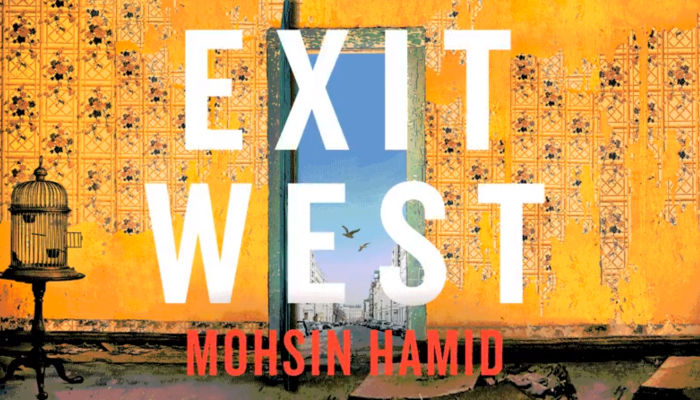 What do divisions matter in a world full of doors? Read an excerpt from Mohsin Hamid’s Exit West, a tale of love and hope, travelling from the Middle East to London and beyond.

An extraordinary story of love and hope, from the bestselling, Man Booker-shortlisted author of The Reluctant Fundamentalist.

Nadia and Saeed are two ordinary young people, attempting to do an extraordinary thing – to fall in love – in a world turned upside down. Theirs will be a love story but also a story about how we live now and how we might live tomorrow, of a world in crisis and two human beings travelling through it.

Civil war has come to the city which Nadia and Saeed call home. Before long they will need to leave their motherland behind – when the streets are no longer useable and the unknown is safer than the known. They will join the great outpouring of people fleeing a collapsing city, hoping against hope, looking for their place in the world …

The evening class Saeed and Nadia had been taking was finished, having concluded with the arrival of the first dense smogs of winter, and in any case the curfew meant courses such as theirs could not have continued. Neither of them had been to the other’s office, so they didn’t know where to reach one another during the day, and without their mobile phones and access to the internet there was no ready way for them to re‑establish contact. It was as if they were bats that had lost the use of their ears, and hence their ability to find things as they flew in the dark. The day after their phone signals died Saeed went to their usual burger joint at lunchtime, but Nadia did not show, and the day after that, when he went again, the restaurant was shuttered, its owner perhaps having fled, or simply disappeared.

Saeed was aware that Nadia worked at an insurance company, and from his office he called the operator and asked for the names and numbers of insurance companies, and tried phoning them all, one by one, inquiring for her at each. This took time: the telephone company was struggling under the sudden load and also to repair infrastructure destroyed in the fighting, and so Saeed’s office landline worked at best intermittently, and when it did, an operator could be swatted out of the swarm of busy tones only rarely, and that operator was – despite Saeed’s desperate entreaties, desperate entreaties being common in those days – limited to giving out a maximum of two numbers per call, and when Saeed finally did obtain a new pair of numbers to try, more often than not one or both proved to be non-functional on any given day, and he had to ring and ring and ring again.

Nadia spent her lunch hours racing home to stock up on supplies. She bought bags of flour and rice and nuts and dried fruit, and bottles of oil, and cans of powdered milk and cured meat and fish in brine, all at exorbitant prices, her forearms aching from the strain of carrying them up to her apartment, one load after another. She was fond of eating vegetables but people said the key was to have as many calories stashed away as possible, and so foods like vegetables, which were bulky for the amount of energy they could provide, and also prone to spoilage, were less useful. But soon the shelves of shops near her were close to bare, even of vegetables, and when the government instituted a policy that no one person could buy more than a certain amount per day, Nadia, like many others, was both panicked and relieved.

On the weekend she went at dawn to her bank and stood in a line that was already quite long, waiting for the bank to open, but when it opened the line became a throng and she had no choice but to surge forward like everyone else, and there in the unruly crowd she was groped from behind, someone pushing his hand down her buttocks and between her legs, and trying to penetrate her with his finger, failing because he was outside the multiple fabrics of her robe and her jeans and her underclothes, but coming as close to succeeding as possible under the circumstances, applying incredible force, as she was pinned by the bodies around her, unable to move or even raise her hands, and so stunned she could not shout, or speak, reduced to clamping her thighs together and her jaws together, her mouth shutting automatically, almost physiologically, instinctively, her body sealing itself off, and then the crowd moved and the finger was gone and not long afterwards some bearded men separated the mob into two halves, male and female, and she stayed inside the female zone, and her turn at the teller did not come until after lunch, whereupon she took as much cash as was permitted, hiding it on her person and in her boots and putting only a little in her bag, and she went to a money changer to convert some of it into dollars and euros and to a jeweller to convert the remainder to a few very small coins of gold, glancing over her shoulder constantly to make sure she wasn’t being followed, and then headed home, only to find a man waiting at the entrance, looking for her, and when she saw him she steeled herself and refused to cry, even though she was bruised and frightened and furious, and the man, who had been waiting all day, was Saeed.

She led him upstairs, forgetting that they might be seen, or not caring, and so not bothering this once with a robe for him, and upstairs she made them both tea, her hands trembling, finding it difficult to speak. She was embarrassed and angry that she was this glad to see him, and felt she might start yelling at him at any moment, and he could see how upset she was and so he silently opened the bags he had brought and gave her a kerosene camping stove, some extra fuel, a large box of matches, fifty candles, and a packet of chlorine tablets for disinfecting water.

‘I couldn’t find flowers,’ he said.

She smiled at last, a half-smile, and asked, ‘Do you have a gun?’

Read an extract from EXIT WEST

‘We see migrants and refugees as a sort of mass of brown faces that are nameless, without any real stories.’Read an extract from Mohsin Hamid's Exit West: http://po.st/ExitWestExtract