Rebels and Rage: Reflecting on #FeesMustFall – Adam Habib’s characteristically frank take on the recent student protests
More about the book! 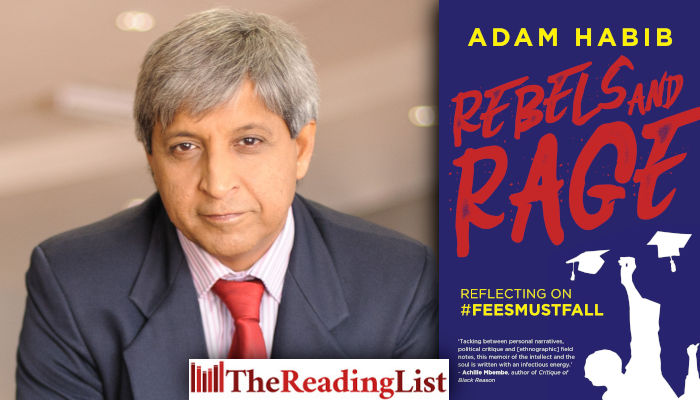 In Rebels and Rage: Reflecting on #FeesMustFall, Adam Habib, prominent and outspoken university official during the recent student protests, takes a characteristically frank view of the past three years on South Africa’s campuses.

‘Habib’s Rebels and Rage is a critically important contribution to public discussion about #FeesMustFall for two sets of reasons: firstly, this book is a timely public archiving of how the protests unfolded from a leading and influential vice-chancellor’s perspective; secondly, the book is usefully honest in its offering of some trenchant political, moral and strategic criticism that it develops against a range of prominent actors including student leaders, many academics and even some anti-apartheid activists.’
– Eusebius McKaiser

‘Tacking between personal narratives, political critique and ethnographic field notes, this memoir of the intellect and the soul is written with an infectious energy. It opens new avenues for exploring the paradoxes of our struggles to envision new futures.’
– Achille Mbembe, author of Critique of Black Reason

In his new book, Habib charts the progress of the student protests that erupted on the Wits University campus in late 2015 and raged on for the better part of three years, drawing on his own intimate involvement and negotiation with the students, and also records university management and government responses to the events.

He critically examines the student movement and individual student leaders who emerged under the banners #FeesMustFall and #RhodesMustFall, and debates how to achieve truly progressive social change in South Africa, on our campuses and off.

Rebels and Rage is both a historical account and a thoughtful reflection on the issues the protests raised, from the perspective not only of a high-ranking member of university management, but also from Habib as political scientist with a background as an activist during the struggle against apartheid. Habib moves between reflecting on the events of the last three years on university campuses, and reimagining the future of South African higher education.

Adam Habib is the Vice-Chancellor of Wits University. He is an academic, researcher, activist, administrator, and renowned political commentator and columnist. Habib has over 30 years of expertise, spanning five universities and multiple local and international institutions, boards and task teams. Habib holds qualifications in Political Science from the University of Natal and Wits, and earned his masters and doctoral qualifications from the Graduate School of the City University of New York. Transformation, democracy and development are fundamental themes of Habib’s research and writing.