Read an extract from Ian McEwan’s provocative and thrilling new novel Machines Like Me
More about the book! 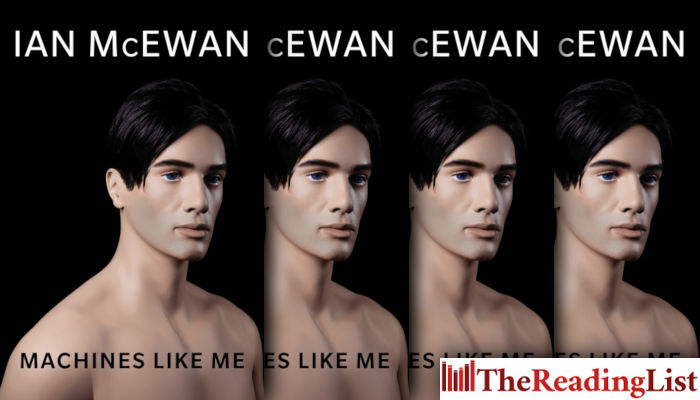 Penguin Random House has shared an excerpt from Machines Like Me, the new novel by Ian McEwan.

Britain has lost the Falklands war, Margaret Thatcher battles Tony Benn for power and Alan Turing achieves a breakthrough in artificial intelligence. In a world not quite like this one, two lovers will be tested beyond their understanding.

Machines Like Me occurs in an alternative 1980s London. Charlie, drifting through life and dodging full-time employment, is in love with Miranda, a bright student who lives with a terrible secret. When Charlie comes into money, he buys Adam, one of the first batch of synthetic humans. With Miranda’s assistance, he co-designs Adam’s personality. This near-perfect human is beautiful, strong and clever – a love triangle soon forms. These three beings will confront a profound moral dilemma.

Ian McEwan’s subversive and entertaining new novel poses fundamental questions: what makes us human? Our outward deeds or our inner lives? Could a machine understand the human heart? This provocative and thrilling tale warns of the power to invent things beyond our control.

It was religious yearning granted hope, it was the holy grail of science. Our ambitions ran high and low – for a creation myth made real, for a monstrous act of self-love. As soon as it was feasible, we had no choice but to follow our desires and hang the consequences. In loftiest terms, we aimed to escape our mortality, confront or even replace the Godhead with a perfect self. More practically, we intended to devise an improved, more modern version of ourselves and exult in the joy of invention, the thrill of mastery. In the autumn of the twentieth century, it came about at last, the first step towards the fulfilment of an ancient dream, the beginning of the long lesson we would teach ourselves that however complicated we were, however faulty and difficult to describe in even our simplest actions and modes of being, we could be imitated and bettered. And I was there as a young man, an early and eager adopter in that chilly dawn.

But artificial humans were a cliché long before they arrived, so when they did, they seemed to some a disappointment. The imagination, fleeter than history, than technological advance, had already rehearsed this future in books, then films and TV dramas, as if human actors, walking with a certain glazed look, phony head movements, some stiffness in the lower back, could prepare us for life with our cousins from the future.

I was among the optimists, blessed by unexpected funds following my mother’s death and the sale of the family home, which turned out to be on a valuable development site. The first truly viable manufactured human with plausible intelligence and looks, believable motion and shifts of expression went on sale the week before the Falklands Task Force set off on its hopeless mission. Adam cost £86,000. I brought him home in a hired van to my unpleasant flat in north Clapham. I’d made a reckless decision, but I was encouraged by reports that Sir Alan Turing, war hero and presiding genius of the digital age, had taken delivery of the same model. He probably wanted to have his lab take it apart to examine its workings fully.

Twelve of this first edition were called Adam, thirteen were called Eve. Corny, everyone agreed, but commercial. Notions of biological race being scientifically discredited, the twenty-five were designed to cover a range of ethnicities. There were rumours, then complaints, that the Arab could not be told apart from the Jew. Random programming as well as life experience would grant to all complete latitude in sexual preference. By the end of the first week, all the Eves sold out. At a careless glance, I might have taken my Adam for a Turk or a Greek. He weighed 170 pounds, so I had to ask my upstairs neighbour, Miranda, to help me carry him in from the street on the disposable stretcher that came with the purchase.

While his batteries began to charge, I made us coffee then scrolled through the 470-page online handbook. Its language was mostly clear and precise. But Adam was created across different agencies and in places the instructions had the charm of a nonsense poem. ‘Unreveal upside of B347k vest to gain carefree emoticon with motherboard output to attenuate mood-swing penumbra.’

At last, with cardboard and polystyrene wrapping strewn around his ankles, he sat naked at my tiny dining table, eyes closed, a black power line trailing from the entry point in his umbilicus to a thirteen-amp socket in the wall. It would take sixteen hours to fire him up. Then sessions of download updates and personal preferences. I wanted him now, and so did Miranda. Like eager young parents, we were avid for his first words. There was no loudspeaker cheaply buried in his chest. We knew from the excited publicity that he formed sounds with breath, tongue, teeth and palate. Already, his lifelike skin was warm to the touch and as smooth as a child’s. Miranda claimed to see his eyelashes flicker. I was certain she was seeing vibrations from the Tube trains rolling a hundred feet below us, but I said nothing.

Adam was not a sex toy. However, he was capable of sex and possessed functional mucous membranes, in the maintenance of which he consumed half a litre of water each day. While he sat at the table, I observed that he was uncircumcised, fairly well endowed, with copious dark pubic hair. This highly advanced model of artificial human was likely to reflect the appetites of its young creators of code. The Adams and Eves, it was thought, would be lively. He was advertised as a companion, an intellectual sparring partner, friend and factotum who could wash dishes, make beds and ‘think’. Every moment of his existence, everything he heard and saw, he recorded and could retrieve. He couldn’t drive as yet and was not allowed to swim or shower or go out in the rain without an umbrella, or operate a chainsaw unsupervised. As for range, thanks to breakthroughs in electrical storage, he could run seventeen kilometres in two hours without a charge or, its energy equivalent, converse non-stop for twelve days. He had a working life of twenty years. He was compactly built, square-shouldered, dark-skinned, with thick black hair swept back; narrow in the face, with a hint of hooked nose suggestive of fierce intelligence, pensively hooded eyes, tight lips that, even as we watched, were draining of their deathly yellowish-white tint and acquiring rich human colour, perhaps even relaxing a little at the corners. Miranda said he resembled ‘a docker from the Bosphorus’.

Before us sat the ultimate plaything, the dream of ages, the triumph of humanism – or its angel of death. Exciting beyond measure, but frustrating too. Sixteen hours was a long time to be waiting and watching. I thought that for the sum I’d handed over after lunch, Adam should have been charged up and ready to go. It was a wintry late afternoon. I made toast and we drank more coffee. Miranda, a doctoral scholar of social history, said she wished the teenage Mary Shelley was here beside us, observing closely, not a monster like Frankenstein’s, but this handsome dark-skinned young man coming to life. I said that what both creatures shared was a hunger for the animating force of electricity.

‘We share it too.’ She spoke as though she was referring only to herself and me, rather than all of electrochemically charged humanity. She was twenty-two, mature for her years, and ten years younger than me. From a long perspective, there was not much between us. We were gloriously young. But I considered myself at a different stage of life. My formal education was far behind me. I’d suffered a series of professional and financial and personal failures. I regarded myself as too hard-bitten, too cynical for a lovely young woman like Miranda. And though she was beautiful, with pale brown hair and a long thin face, and eyes that often appeared narrowed by suppressed mirth, and though in certain moods I looked at her in wonder, I’d decided early on to confine her in the role of kind, neighbourly friend. We shared an entrance hall and her tiny apartment was right over mine. We saw each other for a coffee now and then to talk about relationships and politics and all the rest. With pitch-perfect neutrality she gave the impression of being at ease with the possibilities. To her, it seemed, an afternoon of intimate pleasure with me would have weighed equally with a chaste and companionable chat. She was relaxed in my company and I preferred to think that sex would ruin everything. We remained good chums. But there was something alluringly secretive or restrained about her. Perhaps, without knowing it, I had been in love with her for months. Without knowing it? What a flimsy formulation that was!

Reluctantly, we agreed to turn our backs on Adam and on each other for a while. Miranda had a seminar to attend north of the river, I had emails to write. By the early seventies, digital communication had discarded its air of convenience and become a daily chore. Likewise, the 250 mph trains – crowded and dirty. Speech-recognition software, a fifties’ miracle, had long turned to drudge, with entire populations sacrificing hours each day to lonely soliloquising. Brain–machine interfacing, wild fruit of sixties optimism, could barely arouse the interest of a child. What people queued the entire weekend for became, six months later, as interesting as the socks on their feet. What happened to the cognition-enhancing helmets, the speaking fridges with a sense of smell? Gone the way of the mouse pad, the Filofax, the electric carving knife, the fondue set. The future kept arriving. Our bright new toys began to rust before we could get them home, and life went on much as before.

Would Adam become a bore? It’s not easy, to dictate while trying to ward off a bout of buyer’s remorse. Surely, other people, other minds, must continue to fascinate us. As artificial people became more like us, then became us, then became more than us, we could never tire of them. They were bound to surprise us. They might fail us in ways that were beyond our imagining. Tragedy was a possibility, but not boredom.