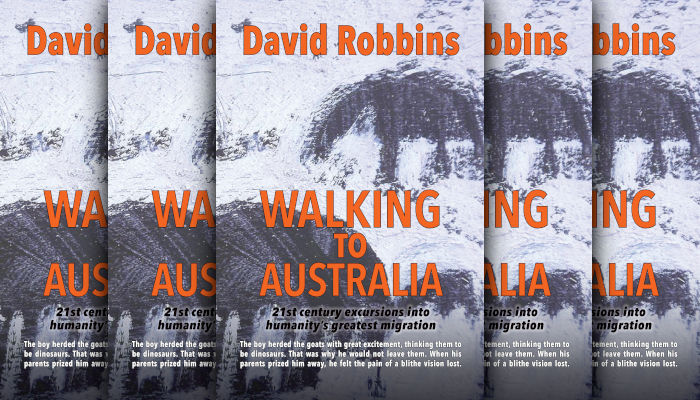 The book charts the journey of the great human migration from Africa, beginning roughly 85 000 years ago in search of survival, and whose descendants reached Australia 20 000 years later.

Along the way, they laid the genetic foundations for humanity’s oldest civilisations – and ultimately inhabited every corner of the globe. Robbins took eight years of intermittent travel to follow their migratory route. From his extensive notebooks and considerable research the book took shape. But this is no dry-as-dust tome. Robbins undertook the intensely personal adventure in the imagined company of his autistic grandson, who serves both as confidant and as human archetype. What the two travellers find together is a tangle of new experiences and responses, from which the linkages between primeval past and complex present gradually emerge. This is a book about our troubled 21st century world, but always with the shadows of its origins in the background.

Robbins was awarded South Africa’s prestigious CNA Literary Award for The 29th Parallel in 1986, after having been shortlisted with Christopher Hope and JM Coetzee. Since then he has published extensively on southern African themes, becoming established as a writer of extraordinary perception in the literary travel and short fiction genres. David received a Lifetime Achievement Literary Award from the South African Ministry of Arts and Culture in 2010.

Read an excerpt from Walking to Australia:

The book ends in a cottage on the coast just north of Perth where the author meets his alter ego (his grandson, Dylan) for the last time.

All through my sojourn in Australia, my notebook with the embossed covers lay on my table where I worked. Sometimes I referred to what I had written in it, but for the most part it served simply as a symbol of my grandson and the adventures we had shared. I wished that I could see him again, but he no longer came to me in person, not since I had lost him in the flood. Once I even touched the embossing without opening the book, as if I was Aladdin hoping for a genie that never came.

I thought about him often though, as I walked by the sea at night. Not far from my cottage a promenade had been built along the shore. A few scattered lights on poles aimed their illumination down onto the walkway. But over the sea the stars held sway. They burned as close and steady as countless shards of mirror in a half-forgotten shrine. The magic of our first encounters with ourselves when we flew up on the wings of our imaginations and saw ourselves in relation to the stars, seemed to have gone out, like a faulty light bulb, in the modern world. Our sense of being at home seemed to have diminished. We felt a deep uneasiness when we looked into the mirror of our enemies’ eyes and saw ourselves. We knew we were going mad; we were sick with restlessness and doubt and a perpetual sense of danger. We longed for the end times while at the same time we secretly thirsted for the old continuities. We longed for the vastness of the stars. The stars had made us. We belonged to them and they to us. But the vastness of that idea as we huddled together on our tiny earth – filled as it was with sacred landscapes – seemed no longer to move us. ‘The bird was upside down,’ Dylan had said. Like crayfish sometimes did, the myths had crawled up onto the beaches of our dogmas simply to fade away. They were mere curiosities now. So perhaps not even the stars remained. In this way I remembered the distant constellation dying in a corner of the universe.

As I wrestled with these dark thoughts my son telephoned and said he and his family wished to visit me in my cottage.

THEY CAME ONE evening for supper. I embraced them at the door and then I enquired after my grandson. His mother said he was sitting in the vehicle. She said it was a habit he had developed recently, this reluctance to get out and enter a strange house – or even a familiar one – that was not his own. So we left the front door open and sat at the kitchen table to open a bottle of wine. Once or twice my daughter-in-law went out to the vehicle and returned alone. ‘He’s not ready yet,’ she said with a patient and motherly smile.

But finally he did appear. The sight of him wrenched slightly at my stomach. He was tall and thin. His hair had darkened and it lay curly on his forehead. His tallness snared my attention. I could not understand why. Then I realised that it was because his whole demeanour brought me some discomfort. His height accentuated his fundamental hesitancy. He seemed stooped and hollow-chested, a retiring teenager in his long shorts and T-shirt hanging loose. His hands twisted in self-consciousness as he entered. He did not glance in my direction, although I could see he was conscious of being in the presence of a stranger. He would not sit with us, so he sat on the settee. His mother switched on the television to occupy him while we spoke among ourselves.

My little abode had an open-plan living space flanked by cottage-pane doors and windows that opened onto a narrow front veranda. So the kitchen table was behind him, and I saw only his head and shoulders above the back of the settee. We drank more wine. All at once, Dylan swung round and looked at me, grinning extravagantly. Then he swung back to face the front. He repeated this several times while we ate supper.

Later I saw that he was watching the television as it was reflected off the cottage-pane windows. The image must have been broken between several panes, or replicated in each, and would have been further distorted because each pane was bevelled, and this would shatter the images at the edges and imbue them on occasion with a rainbow spectrum. The reflected television was adorned with rainbows, the screen had broken into several pieces, the images refracted through the bevelled edges, and the square panes became theatres of liquid images with rainbows. This jumble appeared as premonitions leaking through, like the promise of a pot of gold, before the actual narrative could begin on the screen. This is what the boy saw. And he kept looking back at me as if to say, simply and with deadly accuracy, this is what we have seen together in all our travelling and in all the writing, this is what we have conjured out of our experience: a glance into the kaleidoscope with the basic components in an endless series of reconfigurations.

This was our version of the central reality of the world. The glass of the doors and windows, with the night beyond, provided us with a view of the truth that shimmered there like rainbow creatures dancing in celebration of our moment in the long span of time, our instant in the world, the universe, the galaxy. And I remembered as well, the other reflection I had seen on our travels. It had been my own, with a fire behind the reflective glass burning in the middle of me, driving me forward and simultaneously back up the stairway to those distant beginnings I saw suggested in the treeless mountains of Iran.

Here was the boy who had fought and loved the tiger in the Kerala museum, who had flown with me in the chariot above the mayhem of Phnom Penh, and who had descended like a replica of the human world to witness the renting of the earth, the sudden violent hiccup of the earth that caused islands to disappear and new ones to emerge from the deep, but above all, that caused the waves and the flood that brought death and a sodden destruction to Banda Aceh one fine morning, and where he had been punished for living a human life forever on the edge of innocence.

He had already begun to recede, as if his work was done. He stood enfolded in the warm darkness of the garden when it was time for the family to depart. He stood among the big subtropical leaves in silence. He looked suddenly to be a diminutive figure, smaller than the leaves. Then his mother opened the car door and he left me. I never saw him again in the alluring colours of our magic time. I certainly had no opportunity to say a final goodbye.

But I knew the wisdom of that. Our moment in the cosmos would not alter its course. In that sense we would live forever as tiny participants in the great and astonishing continuum. I heard the music of the deaf composer, this time plucked on the ancient sasando in the church in Kupang – that poem to ecstasy. I remembered my small Catholic friend with her thin brown arms, the brightness of her smile and the simplicity of her belief. I knew I could not believe in that way; the implication of choice and consequent exclusion seemed too high a price to pay. I could only marvel. And then I realised that the two words pointed in the same direction. To marvel at the totality was one step towards believing in the totality.

Sue Nyathi is back with The Gold Diggers! Watch the book trailer