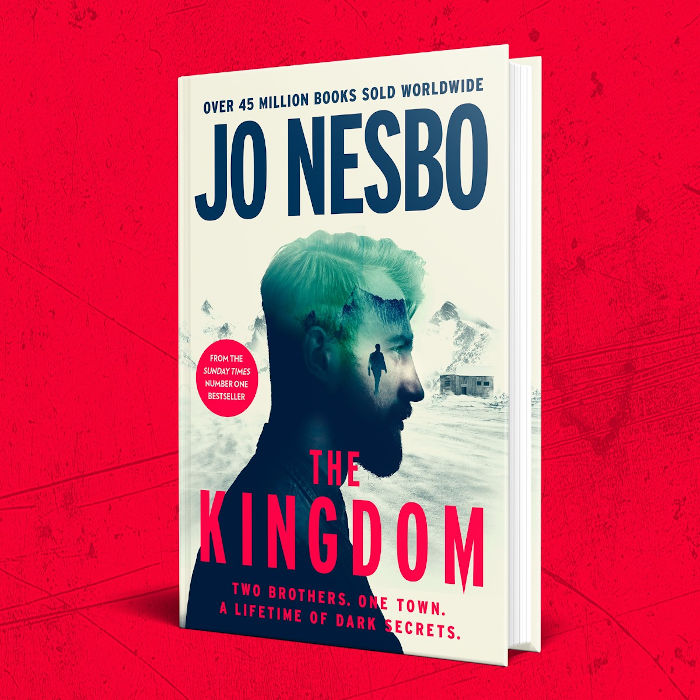 Nesbo is a musician, songwriter, and economist, as well as a writer. His Harry Hole novels include The Redeemer, The Snowman, The Leopard and Phantom, and he is also the author of several stand-alone novels and the Doctor Proctor series of children’s books. He is the recipient of numerous awards, including the Glass Key for best Nordic crime novel.

In the mountains of Norway a man lives a peaceful existence. However one day his younger brother, always the more successful and charming of the two, turns up to visit, accompanied by his new wife. It soon turns out that the little brother is not quite as angelic as he seems …

Set in a small town filled with secrets, this is a compellingly atmospheric new thriller from the Sunday Times number one bestseller.

Translated from the Norwegian by Robert Ferguson.

It was the day the dog died.

I was sixteen, Carl fifteen.

A few days earlier Dad had shown us the hunting knife I killed him with. It had a broad blade that glinted in the sun and was grooved on the sides. Dad had explained that the grooves were there to channel the blood away when you dismembered your prey. Even that was enough to turn Carl pale, and Dad asked if he was thinking of getting car-sick again. I think that was why Carl swore he was going to shoot something, anything at all, and dismember it – cut it up into tiny little fucking pieces, if that was what had to be done.

‘Then I’ll roast it and we’ll eat it,’ he said as we stood outside the barn, me with my head bent over the engine of Dad’s Cadillac DeVille. ‘Him, Mum, you and me. OK?’

‘OK,’ I said as I turned the distributor cap to locate the ignition point.

‘Dog can have some too,’ he said. ‘There’ll be enough for everyone.’

Dad always said he’d named Dog Dog because at the time he couldn’t think of anything else. But I think he loved that name. It was like himself. Never said more than was strictly necessary, and so American he had to be Norwegian. And he loved that animal. I’ve a feeling he valued that dog’s company more than that of any human being.

Our mountain farm maybe doesn’t have much, but it’s got views and it’s got outlying land, enough for Dad to refer to it as his kingdom. And day after day, from my position permanently bent over that Cadillac, I could see Carl head off out with Dad’s dog, Dad’s rifle and Dad’s knife. Could see them turn into dots against the bare mountainside. But I never heard any shooting. And when he returned to the farm Carl always said he hadn’t seen any game birds, and I kept my mouth shut, even if I had seen one small covey of grouse after another taking off from the mountainside, showing me roughly whereabouts Carl and Dog were.

And then one day, finally, I heard a shot.

I jumped so hard my head struck the underside of the bonnet. Wiped the oil from my fingers and looked towards the heather-clad mountainside as the sound of that shot rolled outwards, like thunder, over the village down below by Lake Brudal. Ten minutes later Carl came running, slowing down when he was so close he knew he could be seen by Mum or Dad in the farmhouse. Dog wasn’t with him. He didn’t have his rifle either. I had already half guessed what had happened and went out to meet him. When he saw me he turned and began slowly walking back the way he had come. When I caught up with him I saw that his cheeks were wet with tears.

‘I tried,’ he sobbed. ‘They flew up straight in front of us, there were so many of them and I took aim, but I just couldn’t do it. And then I wanted you all to hear that at least I’d tried, so I lowered the rifle and pulled the trigger. Once the birds were gone I looked down and there was Dog, lying there.’

‘No,’ said Carl, and now he began really crying. ‘But he … he will die. He’s bleeding from his mouth and both his eyes are shattered. He’s just lying there on the ground whimpering and shaking.’

We ran, and after a few minutes we saw something moving in the heather. It was a tail. Dog’s tail. He smelled us coming. We stood over him. His eyes looked like two egg yolks pulled to shreds.

‘He’s done for,’ I said. Not because I’m an expert vet like every cowboy in every Western movie seems to be, but because even if by some miracle Dog should survive, a life as a blind hunting dog didn’t seem as if it would be worth living. ‘You’ve got to shoot him.’

‘Me?’ exclaimed Carl, as though he couldn’t believe that I was actually suggesting that he, Carl, take something’s life.

I looked at him. At my kid brother. ‘Give me the knife,’ I said.

He handed me Dad’s hunting knife.

I placed one hand on Dog’s head and he licked my wrist. I grabbed him by the skin on the back of his neck and with my other hand slit his throat. But I was cautious, nothing happened, Dog just jerked. Not until the third attempt did I manage to cut through properly, and then it was like what happens when you make the hole too low in the juice carton, the blood came pouring out as if it had been just waiting for the chance to get free.

‘There,’ I said and dropped the knife in the heather. Saw the blood in the grooves and wondered if any of it had splashed onto my face, because I could feel something warm running down my cheek.

‘That you were crying?’

‘That you couldn’t bring yourself to … couldn’t put him down. We say that I decided it had to be done, but you did it. OK?’

I slung the dog’s corpse over my shoulder. It was heavier than I expected and kept sliding about. Carl offered to carry it, but I saw the relief in his eyes when I said no.

I placed Dog on the ramp in front of the barn, went into the house and fetched Dad. On the way back I gave him the explanation we’d agreed on. He said nothing, just squatted down beside his dog, nodding as though this was something that he had in some way or other been expecting, like it was his own fault. Then he stood up, took the rifle from Carl and Dog’s body under his arm.

‘Come on,’ he said, and walked up the ramp to the hayloft.

He lay Dog on a bed of hay and this time he knelt, bowed his head and said something – it sounded like one of those American psalms he knew. I looked at my father, a man I’d been looking at every day of my short life, but never seen like this before. Sort of falling apart.

When he turned towards us he was still pale, but his lip wasn’t trembling any longer and his gaze was once again calm and decisive.

And it was. Even though Dad had never hit either one of us, Carl standing next to me seemed to shrink. Dad stroked the barrel of the rifle.

‘Which one of you was it who …’ He looked for the words, stroking and stroking that rifle. ‘Who cut up my dog?’

Carl was blinking uncontrollably, like someone terrified out of his wits. Opened his mouth.

‘Oh really?’ Dad’s gaze went from me to Carl and then back again. ‘You know what? My heart is weeping. It’s weeping, and I have only one consolation. And you know what that is?’

We stood silent. The idea wasn’t to answer when Dad asked something like that.

‘It’s that I have two sons who have, today, shown themselves to be men. Who have shown responsibility and taken decisions. The agonies of choice – do you know what that means? When it’s the choosing that chokes you up, not the choice you end up making. When you realise that no matter what you choose, you’re going to lie awake nights and torment yourself, asking if the choice you made was the right one. You could have run from this, but you faced the hard choice head-on. Let Dog live and suffer, or let Dog die and be his killer. It takes courage not to turn away when you find yourself confronted with a choice like that.’

He reached out his big hands. One straight ahead that landed on my shoulder, the other a little higher up on Carl’s. And his voice had taken on a vibrato Pastor Armand would have been proud of as he continued.

‘It is the ability not to take the path of least resistance but the path of highest morality that separates humans from animals.’ He had tears in his eyes again. ‘I stand here a broken man. But, boys, I am so very proud of you.’

It was not only the most powerful but also the most sustained speech I had ever heard from my father. Carl began to whimper and damned if I didn’t have a pretty big lump in my throat as well.

‘Now let’s go in and tell your mother.’

We dreaded it. Mum who had to take a long walk every time Dad was going to slaughter a goat, and came back red-eyed. On our way to the house Dad held me back a bit, until we were some distance behind Carl.

‘Before she hears this version, best you give your hands a more thorough wash,’ he said.

I looked up, ready for whatever else might be coming, but in his face I saw only mildness and a weary resignation. Then he stroked the back of my head. As far as I could remember he had never done that before. And he never did it again.

‘You and me, we’re alike, Roy. We’re tougher than people like Mum and Carl. So we have to look after them. Always. Understand?’

‘We’re family. We’ve got each other and nobody else. Friends, sweethearts, neighbours, the locals, the state. All that’s an illusion, it’s not worth a candle the day something really matters. Then it’s us against them, Roy. Us against absolutely everybody else. OK?’